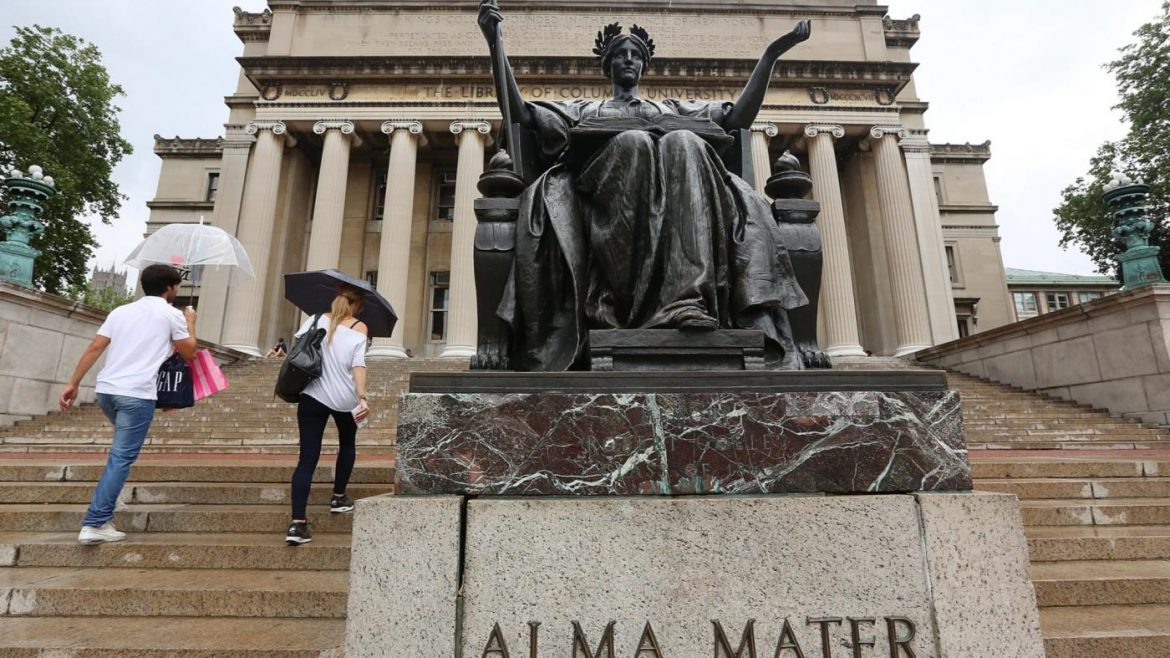 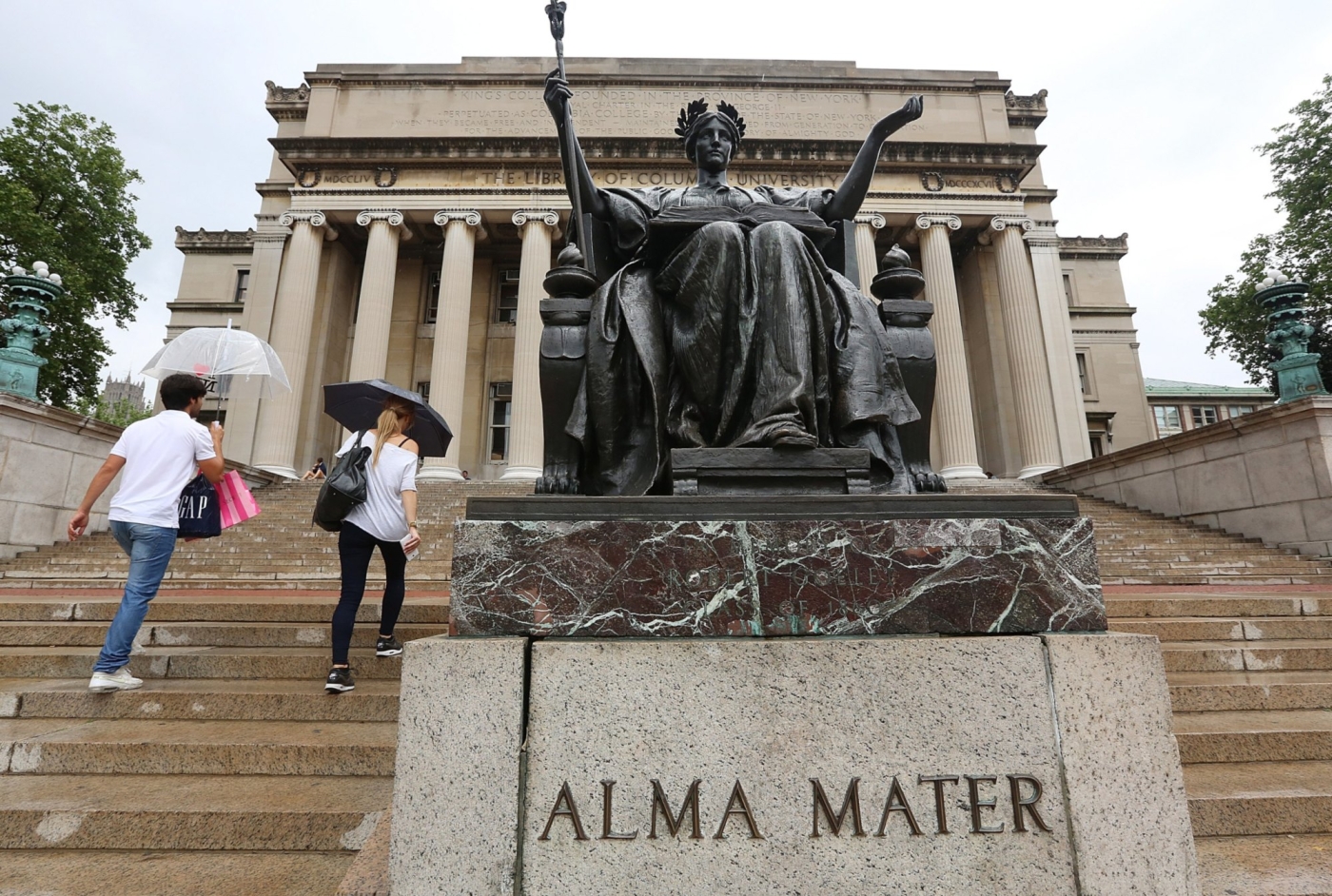 People walk past the Alma Mater statue on the campus of Columbia University, New York City, on 1 July 2013 (AFP)

Following news that Columbia University will be starting a dual degree programme with Tel Aviv University in 2020, student activists have denounced the elite US university for choosing to tie its future to an institution complicit in Israel’s oppression of Palestinians.

In a petition released by students affiliated with Students for Justice in Palestine (SJP) and Jewish Voice for Peace (JVP), activists urged the university to reconsider the degree, or face becoming part of the oppressive architecture of the Israeli state.

“Columbia risks violating Title VI of the Higher Education Act by operating a programme that, as a matter of conforming to official Israeli government policy, would require the university to discriminate against students on the basis of their race and/or national origin with regards to their access to education,” the petition read.

“Israel has targeted Palestinian students, graduate workers and faculty members based at American universities with years-long travel bans from their homeland and research sites, often with little to no clear justification. Without providing due recourse to address such issues and support university affiliates, Columbia risks abetting systemic anti-Palestinian racism and reproducing the racial inequalities of Israeli policies on our own campus.”

On 5 December, the School of General Studies at Columbia University in New York City announced that it would be establishing a dual degree programme with Tel Aviv University in Israel.

Nasreen Abdelal, a student organiser with SJP at Columbia, told Middle East Eye that given the degree will only begin in late 2020, the university still had time to make amends.

“There is no acknowledgement of the geopolitical dimension of creating a programme like this. Or how it could work given Israel’s nation-state law, its anti-boycott laws and the expansion of settlements,” Abdelal said.

Abdelal said students could be potentially subjected to racial, national and religious profiling. She added that the lack of transparency over the establishment of the programme has left students and faculty wondering how it was approved in the first place.

These concerns were further echoed by Katherine Franke, director of the Center for Gender and Sexuality Law at Columbia.

Franke told MEE she was surprised to hear about the programme “as it was created without any meaningful input from faculty or students”.

“Had we been consulted, we would have raised issues relating to Columbia creating a new programme that is not accessible to many of our students explicitly because of their nationality, ethnicity, and/or political speech.

“It is akin to Columbia creating a dual degree programme with University of the Witwatersrand in Johannesburg, South Africa in the 1980s.”

Last week, Columbia University announced that it would be creating a scholarship for displaced students.

In its press release, Columbia said the “university-wide scholarship is unprecedented in Columbia’s history and is the first such initiative in the world”.

‘It is akin to Columbia creating a dual degree programme with University of the Witwatersrand in Johannesburg, South Africa in the 1980s’

– Katherine Franke, director of the Center for Gender and Sexuality Law at Columbia University

“This programme represents a monumental undertaking for Columbia, one that has the potential to transform global education for displaced students,” the university said.

But Abdelal described Columbia’s decision to simultaneously announce a partnership with an Israeli university and a plan to assist displaced students as “plain dissonance” and “completely contradictory”.

“Tel Aviv University is a known accomplice of the Israeli military industrial complex and complicit in the displacement and occupation of Palestinians. Would Palestinians be able to join this degree when they won’t be able to travel [into Tel Aviv]?” Abdelal asked.

But in an earlier statement released by the department, School of General Studies dean Lisa Rosen-Metsch said she was “especially excited about our partnership with Tel Aviv University, which is consistently ranked among the best academic institutions worldwide”.

“By giving students the opportunity to study full time at a top-tier university in the Middle East before bringing them to study in the Ivy League, they will not only benefit from being immersed in a wide range of cultures and experiences, but will also make an immense contribution to the Columbia undergraduate classroom,” Rosen-Metsch said.

According to Abdelal from SJP, the School of General Studies has been framing the partnership as the consolidation of its relationship with Israel.

“We want to know the full extent of the relationship between the school and Israel. There are many former Israeli soldiers at the School for General Studies,” she said.

The partnership between Columbia University and Tel Aviv University comes at a time of unprecedented calls for US universities to divest from companies involved in the Israeli occupation.

Last week, an advisory body made up of students, alumni and faculty at Brown University in Providence in Rhode Island urged the university administration to divest from companies deemed to be facilitating the Israeli occupation.

Though many US university student bodies have passed resolutions calling for divestment, only Hampshire College in Amherst, Massachusetts has so far implemented said resolutions.

While the resolution is not binding, Brown is the first Ivy league university to have passed such a resolution in what scholars and activists describe as a shifting climate in the academic community towards Israel.