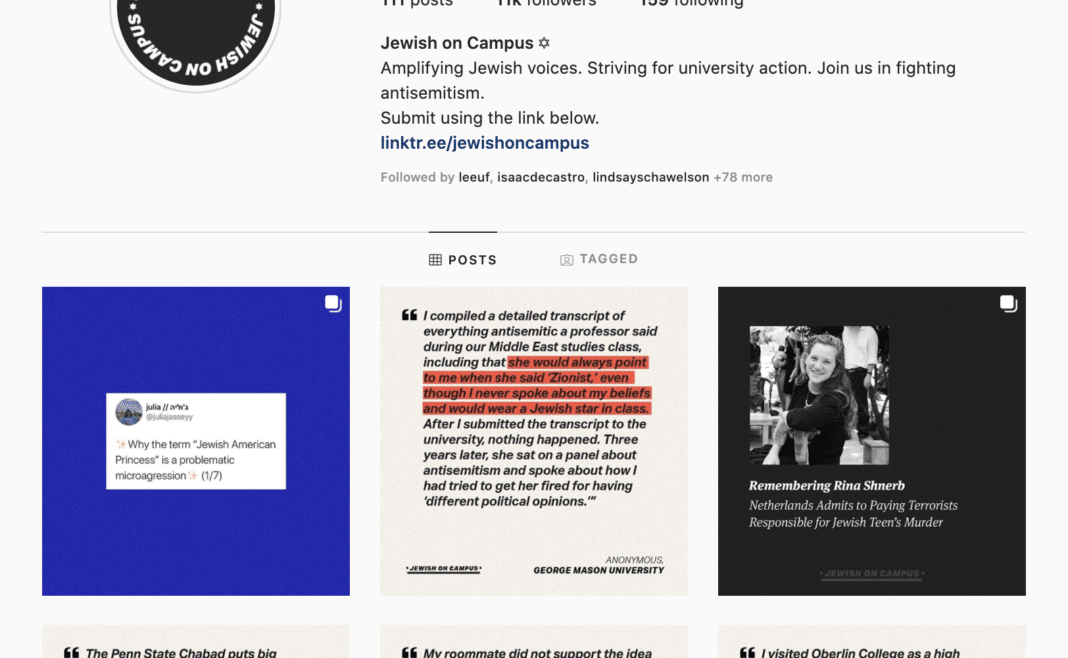 We are amidst a global awakening of reevaluating systemic racism and the ways in which minorities are persecuted and mistreated.

During this wave of change, a group of Jewish college students from across the country at universities including Columbia, Cornell, Stanford, Yale, UChicago, and USC–who have never met in person–has launched a platform to highlight the experience of Jewish students on campus.

In the three weeks since @jewishoncampus first posted on Instagram, the account has garnered over 11,000 followers, the team of students has since tripled in size from the original six co-founders, and the movement has received over 700 story submissions.

Like similar sharing platforms for other minority groups, Jewish on Campus amplifies young adults’ voices to anonymously share their experiences facing anti-Semitism. In recording incidents reported at 245 universities across the nation thus far, Jewish on Campus seeks to hold universities accountable, with the hope that action will be taken––regardless if this prejudice, stereotyping, microaggressions, and hate crimes come from students, professors, and faculty members.

Jewish on Campus features hundreds of posts recalling swastikas drawn in public and private university spaces, denial of anti-Semitism, common stereotypes such as Jewish power, privilege or wealth, remarks equating Jewishness with Islamophobia or anti-Arabness, and Nazi references such as ‘Heil Hitler’ or the even more graphic references to Jews burning in the oven. Such reports of abhorrent rhetoric also include acts of physical violence and hate crimes, such as at Ohio University where one student shares, “In 2018, a Jewish student at my university was pushed down a brick and concrete staircase by her floormates, one of whom was her [Resident Assistant]. They told her, ‘you should have burned in the ovens with your family.’ The RA was reported, but never lost his job, and was her RA for the rest of the year.”

The account’s quick rise to popularity exposes just how silenced many Jewish students have felt when speaking out against anti-Semitic incidents. In a letter addressed to “Institutions of Higher Learning” the Jewish on Campus team declares, “When these incidents [of anti-Semitism] occur, we’ve seen you release statements, some of which only vaguely allude to the hate we face, let alone say the word anti-Semitism . We’ve seen you let our reports slide, saying there’s not much that you can do. We can no longer overlook your lack of action.”

One post from a student at Cornell University exposes these repetitive themes of anti-Jewishness in the classroom and the institution’s public silence: “A professor once stated in a lesson about world religions that Jews are too powerful and hold disproportionate influence in the world. The same professor also said that Jews do not trust anyone except themselves and do not accept non-Jews. Students reported this to the department but no action was taken. These biased, anti-Semitic tropes were taught in lecture as facts and now sit in the notes of hundreds of students from across the country.” The student’s fear of the professor’s comments and frustration at the university’s response is further exacerbated by the knowledge that this demonization and de-legitimization of the Jewish community has now been condoned by a faculty member at such an elite institution.

In response to perceiving the hesitation, or even at times resistance, of universities to take action against people who echo anti-Semitic rhetoric, Jewish on Campus energizes students to continue to speak out, whether on social media or directly to the institution. Such a platform encourages not only Jews to talk about this anti-Jewishness that pervades the world, but all people who have experienced all kinds of harassment and violence due to their identity.

In another letter written to other Jewish students, Jewish on Campus writes, “We hope that these stories, and the fact that we’re here to tell them, inspire you to be proud of your Jewishness, to be more vocal and active, and that they make you feel less alone in this fight.” This sentiment of pride in one’s heritage is not limited to the Jewish community.

As a team member of Jewish on Campus, I extend this statement to all students and all people who experience any kind of hate, bigotry, racism, or violence. Be vocal and active. Support your community as well as other communities striving for respect, equality, and justice. I can only hope that in this time of growing awareness of racism during a pandemic and a global economic recession proves to us all that we are all interlinked. We are in this fight––for kindness, understanding, and dignity––together.