Israeli Arab Legal Scholar: Israel Is Not An Apartheid State

An Interview with Dr. Mohammed Wattad, Member of the SPME Legal Task Force 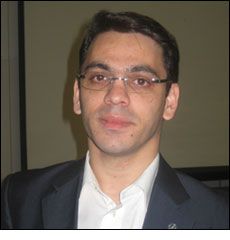 Dr. Mohammed Wattad (Photo by Rhonda Spivak), an Arab Israeli Muslim who is a senior lecturer at Zefat College’s School of Law and editor of the International Journal on Medicine and Law told an audience here that Israel is not an apartheid state.

The very articulate Dr. Wattad spoke at the University of Manitoba during Israel Apartheid Week [IAW], but virtually none of the IAW organizers and supporters came to hear his lecture.

“As an Israeli citizen, I belong to a political entity… I have no other home than the State of Israel. I am a proud Israeli citizen but that doesn’t mean I can’t criticize it… At the same time I am a proud Arab national. I like Arab culture, people, etc… Whenever something wrong happens to the Arab world, I feel it. These are not contradictory things.”

“Don’t tell me Israel can’t define itself as Jewish and democratic… This doesn’t mean that Israel is innocent in all of this [conflict], but there are others here that also aren’t innocent.”

Dr. Wattad, who was sponsored by the Jewish Students Association/Hillel pointed out that

“Israeli Arabs, for example in the Galilee, decided upon the State of Israel’s birth to stay and take citizenship, to be an Israeli citizen or not… That was their choice…”

In 2007, Dr. Wattad, was the recipient in Italy of the an award for the ‘‘Best Oralist for Legal Arguments” given by the International Institute of Higher Studies in Criminal Science. At the University of Manitoba he spoke about the difference between discrimination and apartheid.

He further noted for example that in the case of Israel’s security “fence”, there were

“more than 163 judgments of the Supreme Court where they decided that the fence had to be re-routed/rebuilt.”

He also said that Egypt also has a fence between it and Gaza.

Regarding Israel’s national anthem ‘Hatikvah’, Dr. Wattad, is of the view that the Hebrew words “nefesh yehudi” (the Jewish soul/spirit) ought to be changed to be inclusive of Arabs, Christians and non-Jewish citizens. He proposes that the words in “Hatikvah” be changed to refer to “an Israeli spirit” rather than a “Jewish spirit.”

According to Dr. Wattad, the

In Wattad’s view, after Hosni Mubarak’s reign is over, Egypt could end up falling into the hands of the Moslim Brotherhood.

“I am not so sure that as an Israeli it is good to have democracy in other Arab countries, such as Egypt, given what the majority believes,” he said.

Regarding Hamas, Dr. Wattad said that a “big opportunity was lost,” saying that Hamas started launching missiles, when instead they ought to have used their “golden opportunity to build a state.”

As for Hezbollah’s Hassan Nassrallah, Dr, Wattad noted that he caused the death of a large number “of Israeli Arabs” who were hit by missiles in the Second Lebanon war.

Dr. Wattad, who is a member of Scholars for Peace in the Middle East, said that according to the Knesset website,

“Israeli government protocols show that East Jerusalem was not intended to become part of Israel.”

When asked about the campaign to boycott Israeli academics, Wattad responded that it was as “idiotic”, saying that academic institutions should be “a marketplace of ideas,” and that academic boycotts means that even “left-wing Israelis aren’t able to speak or write.”

When asked whether he thought an economic boycott of Israel would be effective, Wattad answered that they would be “useless” because “Who of the Arab states will boycott Israel economically?… They will help Israel out,” he said.

He noted that notwithstanding the official position of Arab states, they “are doing business with Israel,” such as in Dubai.

“The biggest gas pipeline in Israel is jointly owned by Israel and Iran and has been that way since it was established.”

He further noted, that in the case of war with Iran, “Saudi Arabia will allow Israel to use its airspace.”

Dr. Wattad believes that a “real chance for peace was lost” when former Israeli Prime Minister Yitzhak Rabin was murdered. He also is of the view that Rabin’s murderer Yigal Amir ought not to have been given the right to pro-create while he was in jail.

Dr. Wattad asked if there was an Arab person present in the audience, but there wasn’t.
He noted that usually when he speaks there are a lot of Arab students in the audience who are

“against the idea that an Arab Muslim guy is speaking for Israel.”

Dr. Wattad is one of the founders of Zefat’s Legal College in Northern Israel. He told the Winnipeg Jewish Review that the new public college is “a baby.”

“It’s something to be part of building it. When you work at a place like this, you can lead.”

According to Dr. Wattad, this past year only 70 out of 200 students who applied were accepted, but 20 were dismissed by the college during the year for not coming to enough classes. “We are strict,” he said.

Israeli Arab Legal Scholar: Israel Is Not An Apartheid State

An Interview with Dr. Mohammed Wattad, Member of the SPME Legal Task Force