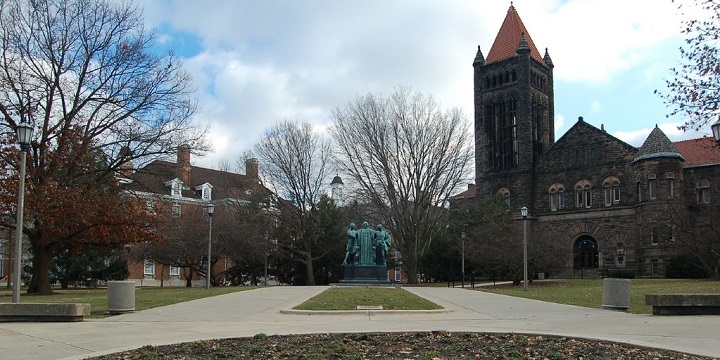 The University of Illinois at Urbana-Champaign. Photo: ilovebutter / Flickr / CC BY 2.0.

The student body president at the University of Illinois at Urbana-Champaign (UIUC) invoked a controversial antisemitism resolution that has been rejected by the campus Jewish community in a mass email hailed by anti-Zionist students.

In the email sent on Wednesday to more than 50,000 students, faculty, and staff, Student Body President Connor Josellis said the “epidemic of antisemitism on this campus is horrific,” and condemned the appearance of hate symbols, such as swastikas.

“Due to recent events on campus, it is worth distinguishing that criticism of Israel, similar to criticism of any other country is not antisemitic and should not be labeled as such,” Josellis said.

He pointed to the adoption of a controversial student government resolution on Oct. 23, saying it “highlighted that those on this campus whose beliefs may align with Anti-Zionism at its root, are not being antisemitic in their criticism of Israel. There is however, a line that all must be aware of.”

“There have been multiple times antisemitism and Anti-Zionism have been conflated on this campus and this resolution passed to protect our Pro-Palestinian students from being mislabeled and harassed as antisemitic due to their beliefs,” Josellis added.

Anti-Zionism — understood as an ideology that opposes the Jewish people’s right to national self-determination in the Levant — has been condemned as antisemitic by many Jewish groups. Campus and professional activists involved in Palestinian advocacy have often faced criticism for endorsing the denial of Jewish rights by calling for a Palestinian state to replace, rather than be established alongside, Israel. Examples of antisemitism recognized by the International Holocaust Remembrance Alliance (IHRA) include, “Denying the Jewish people their right to self-determination.”

More than 400 UIUC Jewish students protested the passage of the October resolution by walking out of the student government meeting, many while chanting, “We do not negotiate antisemitism.”

“This resolution was written without Jewish input,” said Lauren Nesher — a member of the pro-Israel group IlliniPAC — at the time. “Not a single Jewish cultural house was consulted, and yet it purports to speak for the campus community.”

The measure was drafted in response to a mass email sent on Oct. 9 by UIUC Chancellor Robert Jones, which acknowledged that concerns were raised about “anti-Semitic content” in a presentation delivered “at a staff development program by a Housing student-worker.” The presentation in question was titled “Palestine and the Great Return March: Palestinian Resistance to 70 Years of Israeli Terror,” and was prepared by an SJP member.

SJP was incensed by Jones’ email, and had been calling for the administration to release a new mass email that, in part, drew “a clear distinction between anti-Semitism and anti-Zionism.”

The group described Josellis’ email as a “victory” in a statement on Wednesday, alleging that to engage in the “dangerous conflation” of antisemitism and anti-Zionism, was “essentially to equate Palestinian existence as anti-Semitic.”

Yet Melech Lapson, treasurer of the group Illini Students Supporting Israel, called the email “disappointing,” saying it continued “this notion that it’s the student government who gets to decide what it anti-Semitic or not, and not the Jewish community.”

He applauded the email for “condemning all forms of hatred, especially the recent antisemitic incidents such as swastikas discovered around campus,” but found fault with its reference to the October resolution on antisemitism and anti-Zionism.

“The resolution itself sparked the largest joint effort of the Jewish campus community in the university’s history, all joined together in condemning the resolution which sought to define antisemitism on the anti-Zionist’s terms,” Lapson said in comments to The Algemeiner.

“I do believe that one can be Palestinian or support Palestinian rights and not be antisemitic, after all criticism of a country is a sign of democracy,” he noted. “However, anti-Zionism all too often employs antisemitic language and vice versa, and it is up to no one but the Jews to draw the line between them.”