Holocaust Survivor and Israeli Professor Is Being Targeted at Pittsburgh College 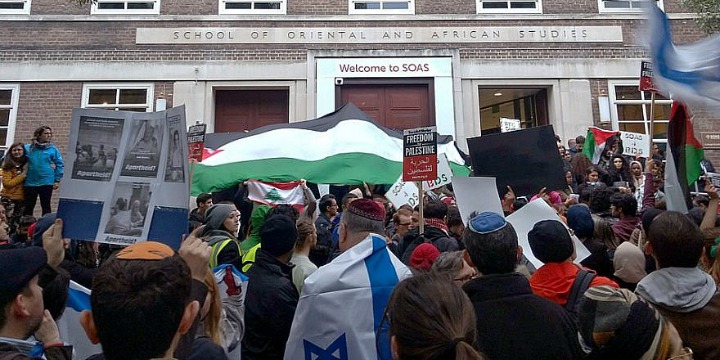 A BDS demonstration outside the School of Oriental and African Studies in London in 2017. Photo: Wikimedia Commons.

In the same city where the mass shooting at the Tree of Life synagogue was met with an outpouring of support for the Jewish community, and the promise that Pittsburgh is “no place for hate,” anti-Israel activists have weaponized anti-harassment and anti-discrimination laws in an attempt to end the academic career of a local Holocaust survivor and the only Israeli professor at Point Park University (PPU).

In October 2018, Dr. Channa Newman was accused by a female student of violating Title IX, which prohibits sex discrimination or harassment at educational institutions that receive federal funding. According to a recent lawsuit by Dr. Newman, the accusation and the harsh steps taken by PPU in response, are the low point in an ongoing campaign by two of Dr. Newman’s colleagues, with the acquiescence of the administration, targeting Dr. Newman because she happens to be a citizen of Israel.

In recent years, Title IX has been repeatedly abused for political ends. For example, in 2015, a Northwestern professor, Laura Kipnis, was investigated under Title IX because of an opinion article she wrote in The Chronicle of Higher Education. Ironically, the article itself discussed how Title IX was transformed from a classically liberal anti-discrimination law into a tool for an illiberal gender-quota regime. In Pittsburgh, that transformation has continued, now into a weapon of the anti-Zionist left.

Dr. Newman’s main antagonist, a professor in her department whom she helped to hire, is also active in the Boycott, Divestment, and Sanctions (BDS) movement.

Of course, professors are allowed to have their personal opinions, and even to be active in social and political movements off campus. What crosses the line, however, is to target a fellow faculty member simply because she is an Israeli citizen. Indeed, the attacks on Dr. Newman, who before these accusations had an exemplary 55-year teaching record at Point Park, are only one piece of a larger campaign to delegitimize Israel on campus.

Besides the attack on Dr. Newman, publicly avowed anti-Zionists have been influencing students, who are most likely ignorant and vulnerable, and who mistake the “passionate hate” that BDS activism inspires for something positive, like a fight for justice and human rights.

Course syllabi, public lectures, and reading material all offer a one-sided view of the nature of the conflict between Israel, the Palestinians, and Israel’s other neighbors. When Israel is presented as an “apartheid” state that conducts ethnic cleansing, or is defined as a “settler” state, we have left the world of academic inquiry and moved into the realm of antisemitic advocacy.

Repeated pleas by Dr. Newman to provide a more balanced view of Israel, the history of the region, and the Israeli-Palestinian conflict were denied. And Dr. Newman’s complaints to PPU’s president and provost about the spread of anti-Zionism and antisemitism on campus, and the danger of the conflation of social activism with the targeting of Jews and Israel, were ignored.

Prior to the Title IX accusation, Dr. Newman had started to feel shunned by some faculty and students who allied with them. With the assent of the administration, students began avoiding required courses taught by Dr. Newman, as well as avoiding having Dr. Newman as an adviser. All this culminated in October 2018, when Dr. Newman was accused by a female student of a Title IX violation. Such sexual misconduct and sexual harassment investigations are a serious charge in academia. It was later revealed that the student had consulted with Dr. Newman’s antagonists prior to the accusation.

In a weird case of being guilty until proven innocent, Dr. Newman was suspended indefinitely, her courses were cancelled mid-semester, she was stripped of her responsibilities as departmental chair, she was told to leave campus, prohibited from returning, and her university email account was made inaccessible to her. Furthermore, Point Park administrators didn’t give her prior notice of the charges against her.

After several months, Dr. Newman was acquitted and was able to return to her job, but the damage was done. According to her lawsuit, the campaign against her created a hostile work environment, and has led to the degradation of her reputation and overall career damage.

In most cases of accusations of Title IX violations, professors are not removed from campus unless and until proven guilty, even when the allegation is rape. Point Park chose to use the most restrictive measures against Dr. Newman even though the allegations were not about any physical conduct or harassment. In fact, the allegations against Dr. Newman do not constitute a violation under PPU Title IX policy, which makes the university’s decision to charge Dr. Newman with a Title IX violation an insult to valid Title IX claims and claimants. Dr. Newman’s pleas that she be subject to less stringent conditions, and to allow her to continue her duties while under investigation, were denied.

Supposedly, Pittsburgh is no place for hate. But as Elie Wiesel once said, “What hurts the victim most is not the cruelty of the oppressor, but the silence of the bystander.” Dr. Newman’s case is a Rorschach test for each of us: are we going to let anti-Zionist zealots undermine and abuse Title IX protections, which are so important to the welfare of everyone on campus?

Abby W. Schachter, a writer, and Anat Talmy, a software engineer, are residents of Pittsburgh.

Holocaust Survivor and Israeli Professor Is Being Targeted at Pittsburgh College