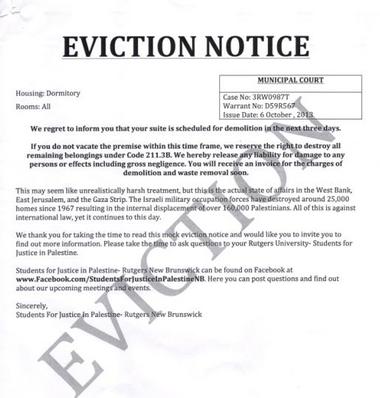 NEW BRUNSWICK — Hundreds of “eviction” notices were slid under Rutgers dorm and apartment doors the night of Oct. 6. The notices have a municipal code number in the top-right corner, including a case and warrant number. The single sheet of paper warns students their suite is to be demolished within three days.

The third paragraph reveals that it’s not a real eviction but instead explains that this “unrealistically harsh” notice is similar to what 160,000 Palestinians have faced since 1967. The group that distributed them, Rutgers’ chapter of the Students for Justice in Palestine, said the fake notices were meant to call attention to Israel’s displacement of thousands in the Occupied Territories.

The campaign has, however, drawn a few critics who say that free-speech can’t be stuffed under a private door because it violates university rules.

“I don’t see this as a free-speech issue,” said Rabbi Esther Reed, the senior associate director of the Rutgers Hillel. “You can’t even distribute a Chinese-food menu under doors at the school.”

Reed said she received complaints from multiple students. Two were particularly bothered by the notice: one female cried because she was fooled by the beginning of the letter, and a male said felt targeted because he is Jewish, and is the only person on his floor to get a notice, the rabbi said.

Amanda Najib, on the Rutgers and national boards of the student group, disputes that account. She said menus are regularly put under students’ doors – and the group randomly picked every one of the hundreds of destinations for the papers. The look of the notices speaks for itself, she added. “It is very very obvious these are fake,” Najib said. “Our motive was to shed light on the daily life of Palestinians and their struggles… It’s the topic that bothered them – they try to silence any criticism of Israel.”

The controversy on campus has only grown in the days since the fliers were distributed – and the group has continued to try and explain its actions.

“This is a college campus, the quintessential marketplace of ideas, where vigorous debate about serious problems is part of the educational experience,” the group said in a statement this morning. “Free speech is sometimes controversial and upsetting to some; it would be worthless if it were not.”

The Students for Justice in Palestine want to make clear that they did not target Jews in their distribution of the fake notices, Najib said. The group intentionally avoided the Hillel building and Les Turchin Chabad House. Najib added that similar demonstrations have taken place at New York University, Harvard, Yale, San Diego State, and Florida Atlantic to further awareness of Palestinian issues.

The Students for Justice in Palestine’s Rutgers chapter slid mock-eviction notices under students’ dorm and apartment doors on Oct. 6, touching off a multi-campus controversy. The group said in a statement today that they were trying to educate the student body about the Palestinian experience of being displaced by Israel.Courtesy of Rabbi Esther Reed

Leaders of the Rutgers Bias Prevention Education Committee could not be reached for comment. However, the Daily Targum, the school’s newspaper, reported that the Students for Justice in Palestine were given a warning not to repeat their demonstration – or face further consequences.

Reed, who is a board member on the bias committee, was speaking as an individual. She said she didn’t feel the repercussions were strong enough. “The students purposely violated university rules, and they were warned not to do this again,” the rabbi said. “It seems like the university washed its hands of this. I find that very disappointing.”

Najib said the group doesn’t regret their actions, and said the group succeeded in raising awareness on the Palestine issue. “We support our decision 100 percent,” she said. “It was done out of a good motive.”