World Council of Churches Opts Out of BDS Movement 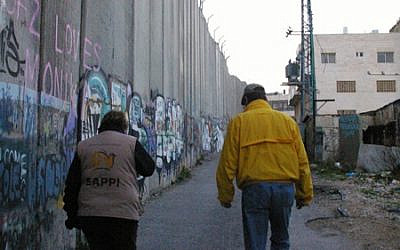 An activist from the World Council of Churches’ Ecumenical Accompaniment Program in Palestine-Israel gives a tour to a would-be peacemaker attending a Christ at a Christ at the Checkpoint Conference. (Dexter Van Zile photo.)

Founded in 1948, the World Council of Churches (WCC) is one of the more vocal and prominent nongovernmental organizations operating in the international arena. Serving as the umbrella organization for 350 Protestant and Orthodox churches in more than 110 countries, the WCC works to promote Christian unity aiming to create “one eucharistic fellowship” among all Christians. It’s a laudable goal.

In addition to promoting unity among churches, the WCC seeks to generate a common Christian witness to the problems facing humanity, another laudable goal. Over the course of its history, it has promoted the causes of religious freedom, women’s rights, and more recently, concern for the environment and access to water in underdeveloped countries. All laudable goals for an organization whose member churches total more than 500 million souls, many of whom live in tough material conditions.

The organization also issues pronouncements about various world affairs with an eye toward bringing an end to war and human rights abuses.

Here the organization has had a rougher time finding its footing. During the Cold War, representatives from Orthodox churches behind the Iron Curtain lobbied the organization to downplay its criticism of the Soviet Union’s human rights abuses while at the same time condemn the United States for its foreign policy in Latin America. As a result of this lobbying the WCC remained nearly completely silent about the Soviet invasion of Afghanistan. These days, the WCC has remained virtually silent about the mistreatment of Christians and Uighurs in China and has said very little about the misdeeds of the Assad regime in Syria or the mullahs in Iran.

One country it has never shied away from condemning is Israel. Under pressure of Christians in Muslim-majority countries in the Middle East, the organization has regularly issued one-sided condemnations of Israel while remaining silent about obstacles to peace in Palestinian society. Because of pressure from Christians in the West Bank, the WCC has been a major proponent of the Boycott, Divestment and Sanctions campaign to pressure Israel into making concessions to the Palestinians.

Astonishingly enough, the World Council of Churches (WCC) appears to be walking away from the BDS campaign targeting Israel. It is astonishing because it has supported the movement for most of the past two decades.

The WCC has been an ardent supporter of efforts to economically isolate the Jewish state and Jews living in the West Bank and the Gaza Strip since the early 2000s. In 2001, the organization’s Executive Committee promoted a boycott of Israeli goods produced in the West Bank and Gaza Strip. In 2005, the WCC’s Central Committee praised the Presbyterian Church USA for its 2004 decision to divest from companies that did business with Israel (which was rescinded in 2006).

Just recently, a spokesperson declared that this 2013 recommendation was not official WCC policy, but this belated denial comes after the national assemblies of three WCC-member churches in the U.S.—the Presbyterian Church USA, the United Church of Christ, and the Episcopal Church— did exactly what WCC talking points in Busan called for by publicly passing divestment resolutions targeting Israel.

These churches embraced BDS in response to a document called “Kairos Palestine,” which was produced by Palestinian Christians operating under the auspices of the WCC. The inception of this document came in 2007, when the WCC established the Palestine Israel Ecumenical Forum, which for the next two years assisted Palestinian Christians as they prepared the text. Issued in 2009, it called for “the beginning of a system of economic sanctions and boycott to be applied against Israel.” The Kairos Palestine Document — which the WCC aggressively promoted — became the centerpiece for BDS activism in WCC member churches throughout the world for the next decade.

That the WCC promoted the Kairos Document should come as no surprise. Rev. Olav Fykse Tveit, a Norwegian pastor who served as co-moderator of the PIEF — the organization that mid-wifed the text — became secretary general of the WCC in 2010 and served in this post for 10 years.

Those days are over. Now the WCC is doing everything it can to convince people it is not part of — and was never part of — the BDS movement. In January 2019, the WCC issued a statement to the press declaring that it does not “promote economic measures against Israel.” (The WCC issued this denial in response to a report from the Israeli organization NGO-Monitor, which monitors nonprofits in the Holy Land.) The WCC made a similar denial in July 2019 in response to a report in the New York Times. And it issued another denial in February 2021 after one of its officials, Rev. Frank Chikane, moderator of the WCC’s Churches Commission on International Affairs, made some incendiary comments about Israel.

In addition to insisting that Chikane was not speaking as a representative of the organization, the WCC declared once again — despite all the evidence, much of it from WCC documents — that it did not support boycotts against Israel.

The WCC has distorted its own history to protect its access to the Holy Land. In 2016, the Israeli government barred a high-ranking WCC official from entering the country because of the organization’s support for the BDS movement. It made this decision under the logic that people who promote boycotts against Israel should not be allowed to visit the country.

Once the WCC realized that it would be held to its pro-boycott rhetoric and lose access to the Holy Land as a result, it was forced to reevaluate its support for BDS. In the aftermath of the 2016 dustup with Israel, being part of a movement that irresponsibly singled out the Jewish state for condemnation was no fun anymore. The cost was too high. If there is anything that high-status Christians love to do, it’s have their pictures taken next to holy shrines in Jerusalem.

The upshot is that for the WCC, support for BDS was a matter of convenience, not of principle. Once it became too inconvenient to be associated with BDS, the WCC abandoned its support for the movement like an unwanted pet at the shelter. This is a good thing.

Perhaps now the organization can start advocating for beleaguered Christians and Uighur Muslims in China.

World Council of Churches Opts Out of BDS Movement