The BDS Pound of Flesh 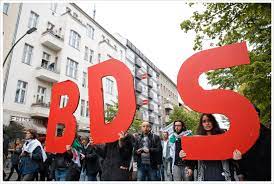 Several years ago, after I spoke at an AIPAC conference about Israel, Zionism, and the slow rise (at the time) of anti-Zionism in the West, a couple of concerned parents approached me. “Look,” they said, “we’re here, inside the conference, we get what you’re talking about. But our kids, who are the ones who should be hearing it, are outside, protesting with IfNotNow.” It was the first time I’d heard of the group, which calls itself “a movement of Jews to end Israel’s occupation and transform the American Jewish community,” but I saw nothing special in its apparent appeal to young people. I assumed it was just the way of the world for kids to rebel against their parents, reflecting changing values and circumstances. I understood that these kids grew up in a world in which the notion of a threat to Jewish life appeared distant, even ridiculous.

Over the years, however, I’ve found that attributing this anti-Israel activism to the different conditions under which the younger generation of American Jews came of age failed to account for the growing virulence of the activists, and the ever-growing demands placed on Jews to join their ranks. I now hear less from parents concerned that their kids are voluntarily joining anti-Israel organizations than from parents alarmed that their children are being pressured to do so—to the extent that it is now a significant consideration for many American Jewish families in deciding where to apply for college.

The demand on young Jews to be less visibly and confidently Jewish as the price of toleration is an ancient one.

The demand on young Jews to be less visibly and confidently Jewish as the price of social acceptance and toleration—which only found its most recent and visible expression in a Harvard Crimson editorial endorsing the boycott movement against Israel—is an ancient one. Call it the “pound of flesh,” the mirror image of Shakespeare’s famous formulation in The Merchant of Venice: the intimidation of Jews into mutilating their own identities and giving up a part of themselves. In some cases, the pound of flesh is visual, like demands to remove yarmulkes, Israeli flags, jewelry with stars of David, or IDF T-shirts. In other cases, it’s written or vocal, like demands to disavow support for Israel or declare support for Palestinian political movements.

The historian Tom Holland, in his excellent book Dominion: How the Christian Revolution Remade the World, described this centuries-old dynamic as “a program for civic self-improvement that aimed at transforming the very essence of Judaism.” Holland describes how Western ideas of enlightenment and human rights still have at their core the now-secularized and universalized but ancient Christian “dream that Jewish distinctiveness might be subsumed into an identity that the whole world could share—one in which the laws given by God to mark the Jews out from other peoples would cease to matter.” Despite this being a dream that in modernity was “garlanded with the high-flown rhetoric of the Enlightenment,” Holland explains, it “reache[s] all the way back to Paul.” Faced with this all-encompassing, new-old campaign, “Jews could either sign up to this radiant vision, or else be banished into storm-swept darkness.” Holland clarifies that “if this seemed to some Jews a very familiar kind of ultimatum, then that was because it was.”

The ancient roots of the pound of flesh dynamic suggest that it is eternal. There is no limit to how much must be given up: Either Jews are no longer Jews, or they are no longer around. Almost all Jews have been subjected to these relentless demands at one point or another, and can recognize it viscerally. Those who see it most clearly are Jews who have faced down the insistence for additional pounds of flesh, and said no.

I confronted this demand myself 25 years ago, when I was a member of Israel’s Labor Party and a proud member of the country’s political left. I worked with left-wing leaders such as Yossi Beilin, an architect of the Oslo Accords, and Shimon Peres, engineer of the Israel-Jordan peace treaty. I publicly supported a Palestinian state, vehemently opposed Israeli settlements, sought a rapid end to Israel’s military occupation of the West Bank and Gaza, and was thrilled when Israel withdrew all settlements and soldiers from the Gaza Strip for good.

I also remained a committed Zionist, a set of values and principles that in no way contradicted any of my other political beliefs about a two-state solution. Yet several encounters with peers and colleagues abroad led to the eventual realization that, despite what I thought were my left-wing bona fides, the fact that I was an unapologetic Zionist banished me from what David Hirsh has called the “Community of the Good.” To remain in the good graces of the global left, I needed to hand over a pound of flesh: to renounce my Zionism. I realized that the demands to comply with the orthodoxies of the “Community of the Good” would never end—that no matter the compromises or sacrifices, there would always be a demand for more.

And so, I stepped back. I renounced not my Zionism, but my membership in the “Community of the Good.” I never changed my opinions about either Zionism or the Israeli-Palestinian conflict; I simply gave up my status as a “good Jew” in the opinions of others.

Fresh from my experience as an Israeli, I was able to recognize the same dynamic starting to play out on American campuses. When I attended college in the United States in the mid-1990s, liberal, left-wing Jews could comfortably be pro-Israel and even active in AIPAC without any fear of repercussions or social pressure to hand over a pound of flesh. That changed with the emergence of J Street, IfNotNow, and Jewish Voice for Peace, until we arrived at the present condition, in which a Jewish student who does not show herself to be an ally of Students for Justice in Palestine, or does not agree that “Zionism equals racism,” or that Zionism is a form of apartheid, and Nazism, and white supremacy, and whatever other supreme evil will be identified next, cannot be considered a good Jew. This escalation in anti-Israel activism among some young Jews no longer seemed like a natural and excusable choice shaped by different generational circumstances, but the result of a relentless campaign of bullying.

Over the last several months, as a visiting professor at Georgetown University in Washington, D.C., I taught a course called “Zionism and Anti-Zionism.” In the many hours I spent discussing student life with students and faculty alike, it became apparent that the anti-Zionist activism on campus—the college version of the pound of flesh dynamic—was not primarily a form of social protest or political expression, but a form of bullying. The anti-Zionist activists, like classic bullies, deliberately targeted the real and perceived frailties of their Jewish peers—fear or shame in the expression of one’s Jewish identity, with its calls to Jewish solidarity and deep connection to a faraway foreign country.

The Boycott, Divestment, and Sanctions (BDS) movement has been one of the most effective expressions of the pound of flesh bullying tactic, inviting young Jews to participate in the cause of “social justice” only to ultimately demand the mutilation of their Jewish identity. BDS has demanded that diaspora Jews not only criticize Israeli government actions, but sever their connections with Israel completely.

The issue is not limited to campus or student life. Last fall, the D.C. chapter of the Sunrise Movement, an organization “mobilizing young people to make climate change an urgent priority across America,” pulled out of a rally to support voting rights because the Jewish organizations also participating supported Israel. The groups that Sunrise mentioned—National Council of Jewish Women, the Reform movement’s Religious Action Center, and the Jewish Council for Public Affairs—are some of the most progressive organizations in American Jewry, devoted to numerous left-wing causes. No matter. These organizations, by their mere presence at an environmental rally, were sullying a noble cause. Unless, that is, they were willing to give up a pound of flesh: their Zionism.

In January, Big Duck, a Brooklyn-based marketing firm with several nonprofit clients, declined to work with the Shalom Hartman Institute over its connection to Israel. This led Shalom Hartman to issue a statement identifying Big Duck’s decision as “a moving of the goalposts on BDS from Israel to North American Jewish organizations,” the never-ending pound of flesh demand in practice. The institute correctly noted that this “applies a standard on North American Jewish commitments that would exclude the vast majority of the members of our community.” In other words, the ancient goal of making it harder and harder for Jews to be fully Jewish, until it eventually becomes impossible.

My choice to step back from the pound of flesh dynamic was a personal one. But I have since met many Jews, older and younger, who shared with me their confrontation with the same challenge and sense that they need to make a similar decision. Extracting oneself from this toxic dynamic is not only the right thing to do, but also a key to mental health. Anti-Zionist bullying takes an emotional toll, and it cuts to the deepest levels of our Jewish identities. Rather than try to find out how many pounds of flesh it would take to make the bullies go away, the only effective response is to resist them with confidence. It’s hard to bully a proud people; it’s impossible to bully a people who know they have nothing to be ashamed of, and who don’t need or seek anyone else’s approval in the first place. The only response to anti-Zionism, in other words, is Zionism.

The BDS Pound of Flesh