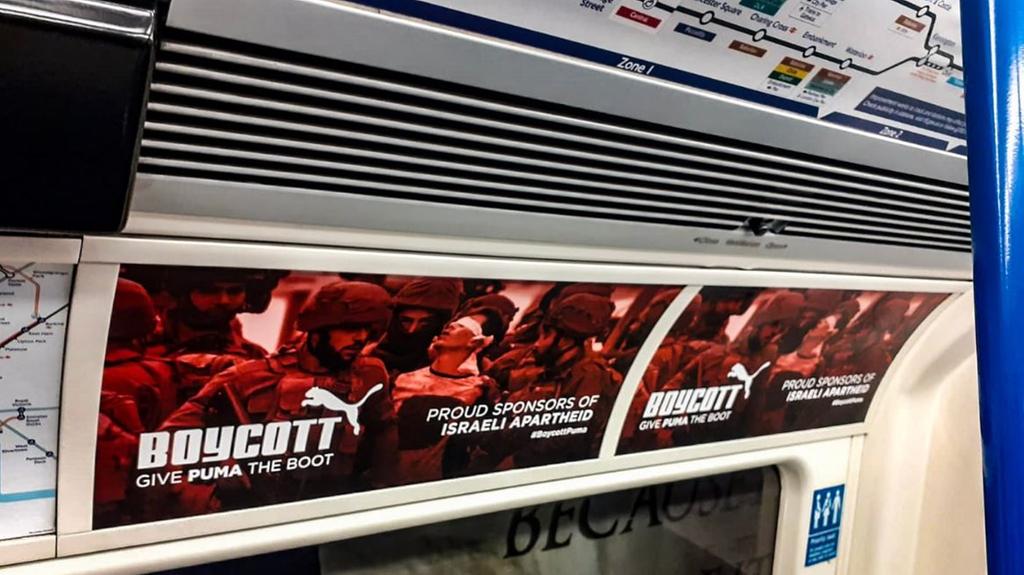 Transport for London (TfL) has said it will immediately remove a number of fake advertisements put up on the Underground network by anti-Israel protesters on Wednesday, describing it as “an act of vandalism.”

Anti-Israel campaigners posted a number of fake advertisements on the London Underground on Wednesday, targeting the Puma sports company.

Featuring the Puma logo along with the words “Boycott – Give Puma the boot” and pictures of Israeli soldiers arresting Palestinian youths, the false billboards accused the firm of being “proud sponsors of Israeli apartheid.”

Photos of the unauthorised posters, masquerading as genuine advertisements, showed that they had been inserted into advertising spaces on board both Northern Line and Bakerloo Line trains.

Examples of the fake adverts on the Bakerloo line (Photo: Facebook)

The people behind the action, calling themselves the “Special Patrol Group”, described Puma as “the main sponsor of the Israeli Football Association (IFA) who have teams in illegal settlements, based on stolen Palestinian land.”

Describing its actions as “subvertising”, it called for people to attend an upcoming protest outside a Puma shop over the coming weekend.

The official Boycott Divestments and Sanctions (BDS) Facebook page also promoted the stunt, calling for people to take part in a “Global Boycott Puma Day of Action” this Saturday.

We have raised with @MayorofLondon & understand that @TfL have reacted quickly, decrying the vandalism and asking their contractors to remove immediately. If you see any more posters, please let us & @TfL know the location. https://t.co/d8gF4Cmgej

— Board of Deputies of British Jews (@BoardofDeputies) October 24, 2019

A TfL spokesperson told the JC that “these adverts are absolutely not authorised by TfL or our advertising agent Global. It is fly posting and therefore an act of vandalism which we take extremely seriously.

“We have instructed our contractors to remove any of these posters found on our network immediately.”