‘Rebranding’ BDS on the African continent

BDS South Africa’s shameful misrepresentation of Nelson Mandela as a militant anti-Zionist is simply one aspect of its broader campaign of defamation, in which no inaccuracy, half-truth or outright lie is too wild if it helps with the demonization of Israel and Zionism. 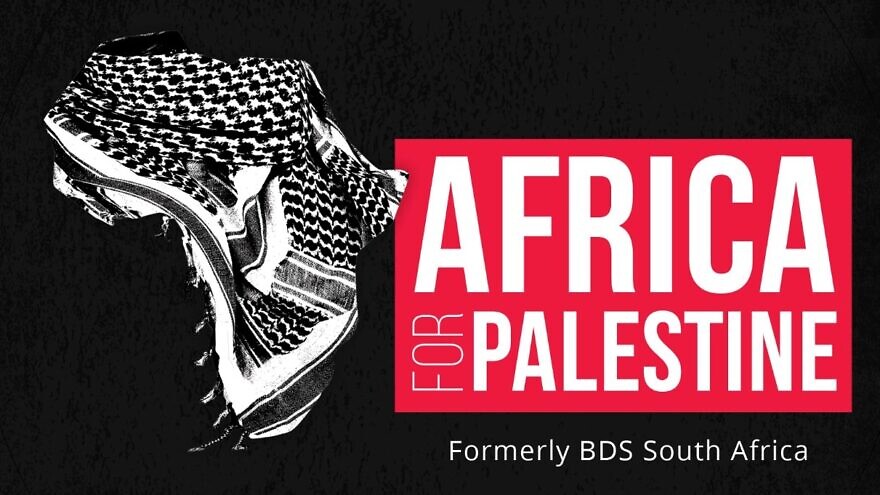 The BDS movement, whose goal is for rest of the world to quarantine the State of Israel as though it was the coronavirus, is undergoing a “rebranding” in its South African heartland.

Last week, BDS South Africa—an NGO that enjoys significant influence within the ruling African National Congress—announced that it was adopting a new name, a new logo and a new(ish) mission. Henceforward, the group will be known as “Africa for Palestine.” Its understanding of what constitutes “Palestine” is displayed in its logo, which shows a Palestinian keffiyeh carefully folded into a map of the entire territory between the Mediterranean Sea and the River Jordan.

What’s with the organization’s redefined mission? According to a statement last week from BDS South Africa, the newly branded group—whose acronym, AFP, is suspiciously similar to that of Africans for Peace, a local grassroots group that is firmly opposed to the boycott of Israel—“will seek to build alliances and partnerships across the continent, reinforce direct support to Palestine and assist the Palestinian Diaspora.” The main means of achieving this is through “pushing back against Israel’s creeping infiltration into our continent.”

Leaving aside the “creeping” medieval echoes of this latter statement, one is struck by the sheer resentment underlying it. After the Jewish state developed close economic and political ties during the 1950s with African nations newly liberated from the shackles of European colonialism, Arab pressure forced Israel out of the continent for several decades. During this century, however, a combination of creative Israeli diplomacy, cutting-edge Israeli technology and development expertise, and a new determination among African leaders to set relations with Israel on their own terms (as opposed to those of pan-Arab or pan-Islamic organizations) have brought that period of isolation to a decisive end. The Israeli presence has mushroomed across the continent, and Jerusalem now has full diplomatic relations with 41 of the 44 sub-Saharan states.

Though the organization would never admit it, BDS South Africa/Africa for Palestine increasingly looks like a relic desperately pushing back against another “wind of change” sweeping the continent. Where Israel offers technology and material assistance from clean-water supplies to AIDS prevention, from post-natal clinics to higher education, the local allies of the Palestinian cause offer ideology—and nothing more.

But for the leaders of the BDS campaign in South Africa, ideology is all that matters. In a speech to the Islamist-backed “Palestine Expo” in London last July, Nkosi Zwelivelile Mandela—a South African parliamentarian and a leader of BDS South Africa—railed against Israel as the embodiment of “neo-imperialism.” He went on to quote an article written for the Egyptian press in 1964 by Malcolm X, which argued that the “ever-scheming European imperialists wisely placed Israel where she could geographically divide the Arab world, infiltrate and sow the seed of dissension among African leaders and also divide the Africans against the Asians.” Quite the global conspiracy, then.

In case there was any doubt about how the BDS movement views Israel’s legitimacy—there are still some people out there who think its purpose is to end only the Israeli “occupation” begun in 1967—here is how Nkosi Mandela put it. As Israel’s main supporter, the United States would never, he told his London audience, “recognize the view that the cause of the conflict dates back to 1948 with the creation of Israel (rather than Israel’s views of 1967 being the crucial point and the return of occupied territories being central to peace negotiations), and that the conflict has been a fight to bring home refugees to a Palestinian state.” In other words, this is a zero-sum game: If you are for Palestine, you must be against Israel.

It won’t have escaped notice that Nkosi Mandela shares the same name as—and is the grandson of—the late South African President Nelson Mandela. Nkosi Mandela regularly invokes his grandfather’s legacy in his bombastic speeches about the Palestinians, and dishonestly so. For while there is no dispute that Nelson Mandela was a supporter of Palestinian independence and an ally of the late PLO head Yasser Arafat, he was not—in marked contrast to his grandson—an eliminationist, but an advocate of two states side by side. As I wrote in this column in 2013, on the occasion of Nelson Mandela’s passing, “Mandela’s memoirs are full of positive references to Jews and even Israel. He recalls that he learned about guerilla warfare not from Fidel Castro, but from Arthur Goldreich, a South African Jew who fought with the Palmach during Israel’s War of Independence. He relates the anecdote that the only airline willing to fly his friend, Walter Sisulu, to Europe without a passport was Israel’s own El Al. And the ultimate smoking gun—the equation of Israel’s democracy with apartheid—doesn’t exist.”

BDS South Africa’s shameful misrepresentation of Nelson Mandela as a militant anti-Zionist is simply one aspect of its broader campaign of defamation, in which no misconception, half-truth or outright lie is too wild if it helps with the demonization of Israel and Zionism. But justified anger at these tactics should also be tempered with the realization that the statements of BDS advocates become more strident after every failure they experience. For example, last November, BDS South Africa failed to persuade the University of Cape Town, one of the continent’s most prestigious institutions of higher education, to cut ties with Israeli academic institutions. In the same month, the group also failed to block the multimillion-dollar takeover of South African dairy giant Clover by an Israeli-led conglomerate, while another post-takeover campaign urging South Africans to boycott Clover products has been summarily ignored. No amount of rebranding will camouflage that.

Ben Cohen is a New York City-based journalist and author who writes a weekly column on Jewish and international affairs for JNS.

‘Rebranding’ BDS on the African continent

BDS South Africa’s shameful misrepresentation of Nelson Mandela as a militant anti-Zionist is simply one aspect of its broader campaign of defamation, in which no inaccuracy, half-truth or outright lie is too wild if it helps with the demonization of Israel and Zionism.
Skip to toolbar