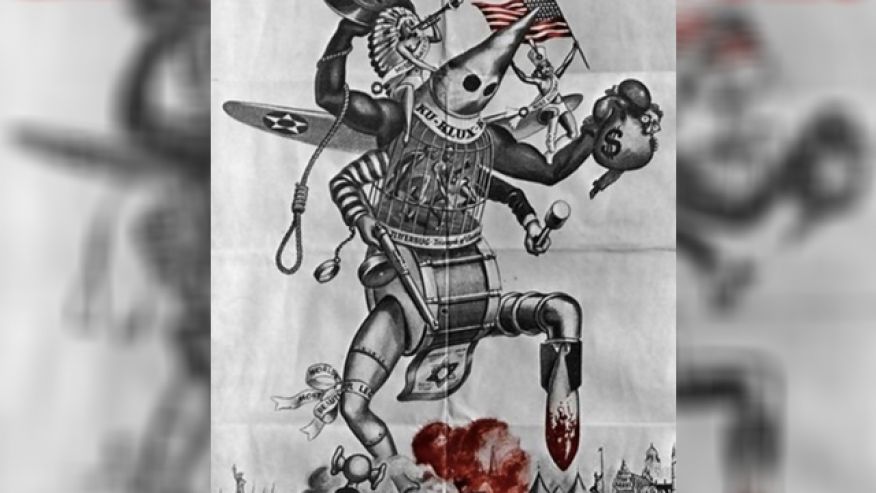 They’ve become the bullies of the quad at college campuses around the nation, shouting down speakers, terrorizing Jewish students and intimidating those who disagree with them on the vexing issue of peace in the Middle East, according to watchdog groups.

Students for Justice in Palestine, with nearly 100 chapters on campuses around the nation, has become increasing strident in promoting its agenda, staging “die-ins,” handing out mock eviction notices in dormitories, and raising funds for Hamas-aligned groups, according to Jewish watchdog groups. Individual members have been accused of assaulting students, vandalizing property and hurling anti-Semitic slurs at Jewish students, all in the name of their cause.

“In the last several years, the tactics used by the group have created an atmosphere that ultimately does not help with a dialogue about the Israeli-Palestinian conflict,” Oren Segal, director of the Anti-Defamation League’s Center on Extremism, told FoxNews.com.

“In the last several years, the tactics used by the group have created an atmosphere that ultimately does not help with a dialogue about the Israeli-Palestinian conflict.”- Oren Segal, Anti-Defamation League

At several schools across the country, chapters have been investigated and even sanctioned for an in-your-face approach that defies the collegiate tradition of discussion and debate. Boston’s Northeastern University suspended the group in March after years of alleged anti-Semitism that included repeated calls for the destruction of Israel, a 2011 disruption at a Holocaust Awareness Week event and the defacing of a statue of a Jewish donor and trustee of the university.

“You have not shown a concerted effort to improve your practices and educate your members on how to properly operate your organization within the boundaries of university policy,” Jason Campbell-Foster, the school’s director of the Center for Student Involvement, wrote in a letter to the group.

The SJP chapter at Vassar College, in Poughkeepsie, N.Y., is currently under investigation by the administration after one member posted a slew of anti-Semitic images on the group’s social media pages. One post in particular that drew the ire of Jewish groups on campus was an old Nazi propaganda poster on the SJP Vassar’s Tumblr blog. The poster, titled “Liberators,” shows a giant, multi-limbed monster being controlled by a caricature with exaggerated racial stereotypes stomping his missile-shaped feet on a small village and was used to convey the group’s dismay over a perceived pervasiveness of Zionism on campus. The group has apologized.

“What occurred was with one member of the group and SJP has apologized,” Vassar student Jeremy Brick, president of the school’s Jewish Union, told FoxNews.com. “But I think a growing problem with regards to the Israeli-Palestinian situation is that people are increasingly making it a black-and-white issue when it is a very gray issue.”

SJP was founded in 2001 at the University of California-Berkeley by Hatem Bazian, a West Bank-born Palestinian who became a lecturer in Arabic Studies upon graduating. According to CampusWatch.org, which monitors how Middle East issues are presented on college campuses, Bazian headed the Muslim Brotherhood-aligned Muslim Student Association while studying at Berkeley. He co-founded the broader “Students for Justice in Palestine” to be a secular social justice movement, according to CampusWatch.org.

From its inception, SJP’s strident, anti-Semitic approach was on full display. In 2002, 79 members of the flagship chapter attempted to disrupt a Holocaust Remembrance Day event and were arrested. At a rally to protest the arrests, Bazian said “take a look at the type of names on the building around campus — Haas, Zellerbach — and decide who controls this university.”

In an April 2004 rally in San Francisco in support of the Iraqi insurgency, Bazian appeared to call for an uprising in the U.S.

“Are you angry?” Bazian shouted to protesters. “Well, we’ve been watching intifada in Palestine, we’ve been watching an uprising in Iraq, and the question is that what are we doing? How come we don’t have an intifada in this country? …and it’s about time that we have an intifada in this country that change[s] fundamentally the political dynamics in here. And we know every — They’re gonna say some Palestinian being too radical — well, you haven’t seen radicalism yet!”

Reached by email, Bazian declined to discuss his group’s views and tactics. But the Berkeley chapter’s website carries what appears to be a mission statement of sorts.

“Students for Justice in Palestine at UC Berkeley is a group of students, faculty and community members working together at the University of California, Berkeley, in solidarity with the struggle of the indigenous Palestinian people against apartheid and occupation,” it states. “In addition to organizing protests, memorials and other events that attempt to visualize the Palestinian struggle, we organize frequent educational events that give a voice to the Palestinian narrative as well as highlight the plight of the Palestinian people under Israeli aggression.”

Making Jewish students in America uncomfortable on campus seems to be SJP’s stock and trade.

In May, the SJP chapter at DePaul University, in Chicago, created a “mock apartheid wall” on the campus’ quad in an attempt to raise awareness about the Israeli-Palestinian conflict. The demonstration raised the ire of a Jewish fraternity, which came and held a counter protest, with some taking issue with use of the word “apartheid” to describe the wall.

“When people say that Israel does not have a right to exist and does not have the right to protect its citizens, that makes me feel incredibly uncomfortable on this campus as a Jew and as a supporter of Israel,” Caleb Bromberg, a junior and member of the Jewish fraternity Alpha Epsilon Pi, told the campus newspaper, The DePaulia. “I think the message is more anti-Semitic than anti-Zionist.”

In April of this year, the SJP chapter at New York University slipped bogus eviction notices under the dorm room doors for up to 2,000 undergraduate students, some of whom were Jewish.

“We regret to inform you that your suite is scheduled for demolition in three days,” read the sham notices, which were distributed in the Palladium and Lafayette dorms of the school. “If you do not vacate the premise by midnight on 25 April 2014, we reserve the right to destroy all remaining belongings. Charges for demolition will be applied to your student accounts.”

The fliers were meant to parallel the alleged evictions of Palestinians by Israel. But many Jewish students felt intimidated.

“A flier titled ‘eviction notice’ anonymously slipped under doors at night is not an invitation to thoughtful, open discussion,” NYU John Beckman said.

Another method of activism by the chapters of SJP across the U.S. is to demand that their respective colleges divest from companies that do business with Israeli companies. SJP chapters brought forward divestment resolutions to their respective student governments at several schools in the California University system, including Santa Barbara, Riverside and San Diego State.

“A lot of the recent acts are a direct result of the guidance from the AMP,” Segal said, adding that many events and summits are held by the group to teach activism tactics to SJP members. “SJP is more organized and taking these extreme actions in part because of what they learned from the AMP.”

The ADL believes Muslim groups are using SJP to silence pro-Israel views on campus and stifle dialogue by branding opposing views on the Palestinian conflict as illegitimate.

“This tactic, dubbed “anti-normalization” by its proponents, is predicated on the claim that there is no conflict: Israel is the aggressor and Palestinians are the hapless victims and, therefore, a debate between the two sides should be resisted,” states a report by the ADL. “In other words, even describing the Israeli-Palestinian conflict as a “conflict” is too great a concession to the pro-Israel position.”