Jews Must Not Embrace Powerlessness

The danger of intersectionality 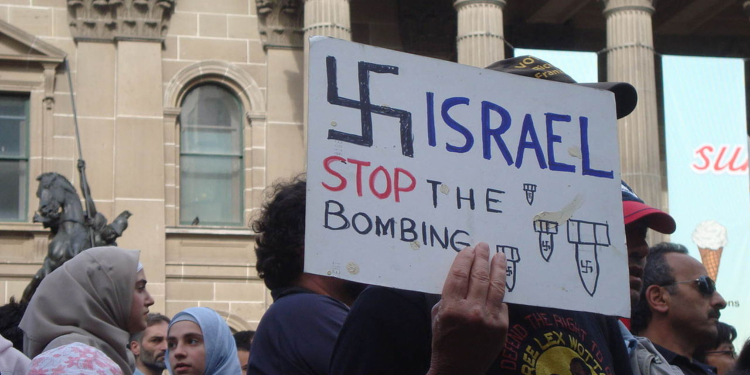 To many observers, Israel’s military strength, thriving First World economy, and democratic institutions seem to mark it as a conventional Western power—albeit one located in the Middle East. Nothing could be further from the truth. The Zionism that gave birth to Israel was a radical and revolutionary movement not only to return the Jewish people to sovereignty in their ancestral homeland, but to eradicate the narrative of victimhood that had come to define the Jews of the Diaspora after centuries of oppression and second-class citizenship.  That is why Israel is one of the greatest progressive success stories of modern times.

Thus, it makes sense that many left-leaning pro-Israel activists are making valiant efforts to create a space for Zionist groups within the American social-justice movement. On the surface, the fit is an obvious one. Formerly disempowered Jews, who had been oppressed for thousands of years and had lost millions to the Holocaust, now have agency. No longer at the whim of tyrannical regimes, Israel is a powerful, if small, nation-state where the Jews can finally exercise the same rights and privileges as all other peoples.

Yet, as these well-intentioned pro-Israel groups are discovering, intersectionality—the new framework for social-justice movements and the religion of the progressive left—is inherently irreconcilable with Zionism. Pro-Israel groups will fail in their attempts at inclusion precisely because Israel did not fail in its efforts to reverse the condition of the Jew in history. Within the social-justice movement, there is no place for an ideology or an identity that is premised on the idea that Jews will no longer be victims.

In a recent article in the New York Times, columnist Michele Alexander suggested that the only reason Martin Luther King Jr. had been supportive of a homeland for Jews in his day was that “he recognized European Jewry as a persecuted, oppressed, and homeless people.” King would never, she argued, support Israel today.

Alexander inadvertently highlighted a key point here. While intersectional groups may argue that their problem with Zionism is Israeli treatment of the Palestinians, their real issue with Israel, and by extension with pro-Israel activists, is that they are not only no longer oppressed and homeless but strong, powerful, and independent.  Within contemporary social-justice movements, power is seen as inherently corrupt, regardless of whether it is used for defense or domination, for overcoming odds or oppressing others. Outdated denunciations of “Western imperialism” are used by activist groups to reduce complicated issues to a simple calculation: Power = injustice.

Intersectionality arose from a 1989 paper by Kimberlé Crenshaw, an academic and activist. In the paper, she discussed the ways that gender and race intersect with each other to multiply the negative effects of systems of power on women of color. Her central observation—that one can’t confront and fight against discrimination without acknowledging the interaction between multiple parts of one’s identity—was important. However, over the years, as Crenshaw’s ideas on the complexity of identity have been mapped onto queer theory, feminist legal theories, and theories on sexuality, race, and gender, the focus morphed from her agenda of empowerment to an emphasis on the import and individuality of identity.

In an attempt to unite very disparate and seemingly incompatible groups, social-justice movement leaders came to highlight the only thing these groups have in common: They all feel misunderstood and victimized. Thus, intersectional social-justice groups began to coalesce around, and embrace, the identity of shared victimhood.

In truth, many of the groups that come together under the intersectional banner have just claims to victimhood. However, instead of working to fight against the victim identity, they elevate it, since it is the only thing that keeps them all connected. For example, the conflicting ideology of feminist groups and fundamentalist Islamic groups seems impossible to reconcile. However, they can coexist within the intersectional movement because both claim victimhood status, and thus they unify around that shared identity. This overlapping experience of feeling discriminated against and disempowered—the embrace of the “intersection” of their victimhoods—is crucial to holding this new coalition together.

Given the acceptance of how complicated and personal each person’s identity is, and the stress on how much the complexities of identity affect each person’s life experiences, the intersectionality movement demands of its members unchallenged support for one another in their struggle against whoever is identified as an oppressor. We “recognize we have a shared struggle with all oppressed people,” write the authors of the Black Lives Matter’s website. If the model of power = injustice is the structure in which all oppression must be understood, all that is required is for one group to note a power imbalance. At that point, all allied groups must accept the justice of the claim. Thus, the correlate to the very particular, albeit shared, victimhood of Islamic pro-Palestinians and feminist groups is that both join in each other’s fight against each other’s oppressors. Islamists accept the evil of white men; feminists reject Zionists.

This blind acceptance of both victimhood and identified oppressor is exactly the opposite of what was compelling about social-justice movements before intersectionality came to dominate them. The aim of the older social-justice movement was greater equality, greater power, greater access for those who had been ignored, silenced, and disempowered for too long. Social-justice groups were designed to give voice and agency to those who had been disempowered. Victimhood was rejected. Women didn’t cower in safe spaces when it got dark; they “took back the night.” The purpose was to overcome the status of victimhood and transform it, and it was understood that to do this effectively, groups had to work together to improve the system and expand access to power. Power was not a bad word, but a collective aim.

In that social-justice movement, there was room for politically empowered Jews, as exemplified by Israel and supported by the Zionist movement. This is no longer the case. “Liberalism used to be about making the capitalist system fairer, gentler, and more inclusive,” Bret Stephens has written. But now “it has become an ideology for maligning it as a ‘rigged system’ (Elizabeth Warren), or eliminating an entire industry within it (Kamala Harris), or demonizing and punishing those who do exceptionally well at it.”

Stephens is correct if one views the intersectional movement as a subspecies of liberalism. However, many of the intersectional groups have morphed from liberalism to progressivism. Their focus is not just on individual rights, liberty, and justice for everyone, but on tearing down a system that, however flawed, allowed for opportunity of expansion of these values. If all power is unjust, then all systems of power need to be destroyed. The existing American political process is not simply imperfect but inherently evil and unredeemable.

American Zionists are thus triply excluded: They reject victimhood, they don’t spend their efforts fighting against oppressors, and they gained their power by navigating the American political system rather than rejecting it.  “It is well known that those who understand and use the political process…can amplify their political clout beyond their numbers,” explains Henry Feingold in Jewish Power in America.“It is also no secret that beyond their high voting rate and the location of Jewish voting blocs in pivotal states, Jews are among the most engaged constituencies in the nation.”

It was the trauma of their failure to alter the trajectory of the Holocaust that forced American Jewry to become more engaged in the political system, specifically in their support and efforts on behalf of Israel. In the early part of the 20th century, American Jews had been divided on the question of a Jewish homeland. But in the aftermath of the Nazi killing machine, they coalesced around the need for a militarized Jewish country so Jews would never again be powerless in the face of murderous anti-Semitism. American Jews no longer felt it was the better part of wisdom to keep their heads down.

It was the Six-Day War that marked the change. Israel, the symbol of the Jewish people, was victorious in the face of overwhelming odds, and American Jews felt both pride in Israel and in their own efforts on behalf of their national homeland. In the buildup to the war in the spring of 1967, Jews had mobilized millions of dollars, lobbied, and marched. They had reached out to their members of Congress and worked within the system to help save their brothers and sisters in Israel. The Six-Day War intensified American Jews’ love for Israel and elevated their confidence in their ability to act for their interests at home and abroad.

Yossi Klein Halevi’s description of the war’s bifurcated effect on the Israeli psyche is relevant for understanding American Jewry’s post-’67 motivation and actions as well. From the run-up to the war, when Egypt blockaded Israel and no international power was willing to send aid, half of Israel’s population internalized the lesson that the Jews would always be insecure and on their own. The other half became emboldened by the ensuing victory and what it said about Israel’s military prowess and the new nation’s self-confidence. For their part, American Jews seemed to combine the two aspects of the Israeli experience. The abandonment of the new state by the international system was a reminder of the world’s instinctive willingness to allow the Jewish people to be obliterated, and the best way to prevent that from happening was for Jews everywhere to change the course of the future through their own actions.

This was reinforced over the years through American Jewry’s continued awareness of the threats facing Jews around the world—most notably the plight of Soviet Jewry—and the ongoing hostility and danger of Israel’s neighbors. American Jews responded to these threats through honest, serious, and thoroughgoing participation in the American political system.

If groups focused on Jewish and Israeli issues want to be part of this new progressive intersectional movement, they will have to reject everything that Jews, as a minority group, have learned over the past century about navigating the American political system. They will be required to highlight the continued oppression and victimhood of the Jewish people and others, rather than embrace Zionism’s focus on the positive uses of power.

Take the example of If Not Now, a millennial group formed to “seek an end to the American Jewish support for the occupation,” as its own literature says. “We acknowledge the existence of anti-Jewish oppression in the world and in ourselves,” according to the organization’s website. “We take pride in who we are and work towards ending oppression in our own communities so we can be more whole.”

If Not Now is an anti-Zionist group, but not because it is critical of Israel. It is anti-Zionist because it rejects the core of Zionism, which is premised on embracing power, and instead focuses on the oppression and victimization of Jews and Palestinians. It wants to tear down, rather than make advantageous use of, existing systems of power.

That is why Zionist groups need to accept that they will never be included in this contemporary progressive and illiberal social-justice movement—and should not wish to be. They should let those who claim that Israel is a trigger word go hide in their safe spaces; Zionists need to embrace the strength and power of the Jewish homeland and find ways to work within the system to support and strengthen Israel’s position on campus and in Washington. In the process, they will find other brave and thoughtful allies who also understand that power is not inherently bad. By highlighting the insidious and disempowering nature of the current intersectional social-justice movement, perhaps Zionists can not only advance their own agenda but help improve the intellectual climate and discourse across America.

Jews Must Not Embrace Powerlessness

The danger of intersectionality