How the BDS campaign infiltrated ESG 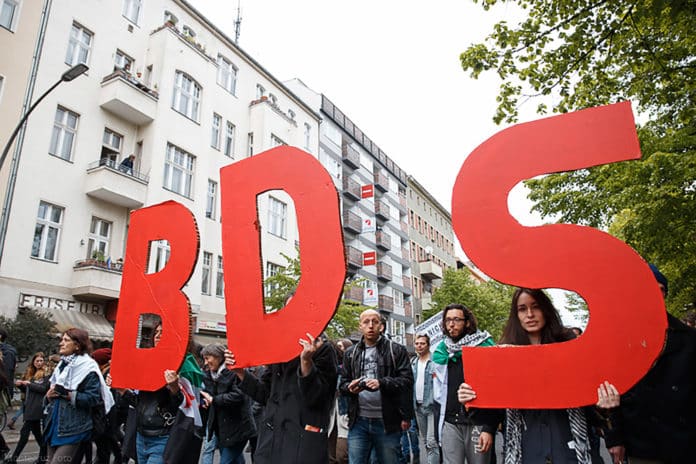 C-suites, board rooms and investment firms across the globe are increasingly at risk of becoming unwitting accomplices to one of the most pernicious forms of economic warfare waged against the world’s only Jewish State. How can they protect themselves? Simple: Demand transparency and accountability from asset managers and research firms guiding the flow of trillions of dollars under the banner of Environmental, Social and Governance (ESG) investing.

Most people think of ESG as a form of climate change activism that turned into an investment ratings system that rewards “green” companies and punishes carbon emitters. But some ESG research firms now rate companies based on respect for human rights, labor practices, business ethics, product quality, health and safety, and data privacy, in addition to environmental standards.

PwC estimates that ESG-related assets under management will grow to nearly $33 trillion by 2026, up from $18 trillion in 2021. More than one-fifth of all global assets under management will be guided by ESG ratings and research. As asset managers establish portfolio screens based on ESG ratings, the firms issuing those ratings will increasingly impact capital flows in market-changing ways.

Enter the Boycott, Divestment, Sanctions (BDS) campaign targeting Israel. Anti-Israel activists know if they can infiltrate ESG ratings, they can potentially induce an unprecedented level of divestment from Israel-connected companies. And unlike past high-profile incidents, like the ones involving Airbnb and Ben & Jerry’s, where companies retreated from anti-Israel boycotts in the face of public backlash, this kind of BDS would take place behind closed doors with most people unaware.

This isn’t a hypothetical threat; it’s already happening. My own inside look at one leading ESG research firm, Morningstar Sustainalytics, revealed a ratings process with a deeply embedded bias against Israel-connected companies. Specifically, the ratings presume that Jewish presence in certain areas – East Jerusalem, the West Bank, and the Golan Heights – represents a human rights abuse. On that basis, the ratings penalize Israeli companies across multiple sectors for providing services to Jews living in the disputed areas.

In most cases, the rating system assigns such companies a “controversy” label that inflates their overall ESG risk rating. In other cases, the system places companies on a “watchlist,” effectively a do-not-invest list, for activities that include supporting Israel’s efforts to protect civilians from terror attacks. Companies like Motorola Solutions and Elbit Systems appear on the watchlist because they provide technology that is part of Israel’s security barrier, which helped stop homicide bombers from blowing up city buses and crowded restaurants in the mid-2000s. A Morningstar Sustainalytics ”engagement” service periodically reaches out to let penalized companies know they’ll be excluded from investment portfolios unless they change their ways.

The double standards applied to Israel, a hallmark of the anti-Semitic boycott movement, are apparent in these ratings, too. Israel and China are nothing alike. One is a flourishing democracy with rule of law and an internationally respected judicial system; the other, an authoritarian regime conducting a genocide in Xinjiang. Yet somehow, Morningstar dings Israeli companies for so-called human rights controversies while Chinese companies get a pass.

What sources does Morningstar use to validate its underlying assumptions and document alleged misconduct? The list is long, but it includes publications from the UN Human Rights Council, Human Rights Watch, Amnesty International, all of which are part of an antisemitic campaign to smear the existence of a Jewish State as a racist endeavor. The list also includes a host of pro-BDS organizations that devote every waking minute to attacking companies operating in parts of Jerusalem, the West Bank, and the Golan Heights.

Morningstar initially brushed aside accusations of anti-Israel bias last year, but later commissioned an outside law firm, White & Case, to investigate its practices. Unsurprisingly, White & Case concluded there was no evidence of systemic bias against Israel in the ESG ratings. Yet a closer look at the firm’s report shows that White & Case let its client off the hook despite turning up ample evidence of bias. Then again, this is the same law firm that recently sponsored forums accusing Israel of apartheid.

Public analysis of White & Case’s flawed report published by the Foundation for Defense of Democracies, along with a series of news stories, prompted 19 state attorneys general to launch an investigation into potential deceptive business practices while 18 state financial officers wrote Morningstar with concern. Arizona’s Treasurer notified Morningstar it may be in violation of the state’s anti-BDS law – one of more than 30 in the country – which requires the state to divest its pension funds from any company that boycotts Israel.

To avoid a potential blacklisting from state investments and contracts, Morningstar last week announced what appear to be significant changes in its ESG ratings methodology – with promises to change its assumptions and sources. As a first step, the company will prohibit the use of the UN Human Rights Council as a source of information.

The announcement won accolades from major Jewish organizations. But it’s premature to assess whether it will produce meaningful results. For now, biased ratings, watchlists and engagements with Israel-connected companies remain in effect. Pro-BDS groups continue to serve as sources. Until investors are shown clear evidence to the contrary, BDS activity within Morningstar continues. Arizona Treasurer Kimberly Yee said she would not close her investigation into Morningstar until she’s convinced the company’s ESG ratings are no longer encouraging Israel boycotts – a prudent course of action.

Morningstar, of course, may not be alone. Other major players in the ESG ratings space include MSCI, S&P and Moody’s. Investors would be wise to ask their asset managers and research firms to explain how they rate Israel-connected companies in the ESG space. No matter where they stand on the merits of ESG, there should be zero tolerance for Jew-free investing.

Richard Goldberg is a senior advisor at the Foundation for Defense of Democracies. He previously served on the White House National Security Council, as deputy chief of staff to former U.S. Sen. Mark Kirk (R-Ill.), as former chief of staff to Gov. Bruce Rauner (R-Ill.), and as a Navy Reserve Intelligence Officer. In 2015, he architected the first state anti-BDS law in the nation.

How the BDS campaign infiltrated ESG