In what could set an international precedent, an Israeli civil rights organisation is suing an Australian academic for his support of a boycott movement against Israel, prompting plenty of debate. 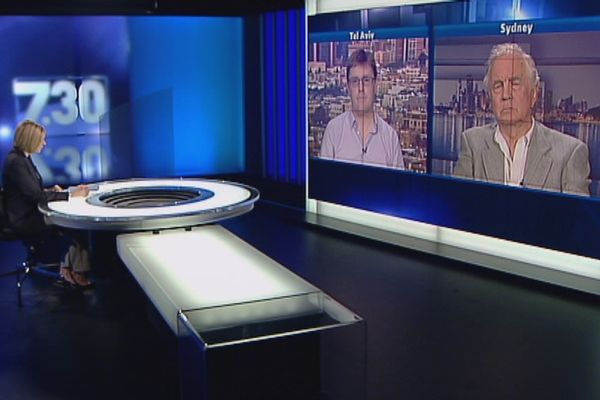 Transcript LEIGH SALES, PRESENTER: In what could set an international precedent, an Israeli civil rights organisation is suing an Australian academic for his support of a boycott movement against Israel. Professor Jake Lynch of Sydney University is the target of the action in Australia’s Federal Court. The case alleges his support of the so-called Boycott, Divestment, Sanctions campaign against Israel is racist and discriminatory. The BDS campaign operates around the world and uses political and economic pressure on Israeli individuals, organisations and companies to protest against Israel’s policies towards Palestine. Professor Lynch’s supporters claim this legal action is part of a concerted Israeli effort to shut down any criticism of the state and its alleged human rights abuses and violations of international law.

To debate what’s going on, I’m joined now from Tel Aviv by Andrew Hamilton, who’s a solicitor with Shurat Hadin, the organisation mounting the legal action, and in Sydney by Professor Stuart Rees, a supporter of Jake Lynch and a fellow BDS activist.

Welcome to both of you. Mr Hamilton first: what does Shurat Hadin hope to achieve with this legal action?

ANDREW HAMILTON, SHURAT HADIN ISRAEL LAW CENTRE: Shurat Hadin hopes to expose the fact that BDS is racist and discriminatory by attacking private individuals and organisations based on their racial background or ethnic national background of being Israeli and being Jewish. By attacking them, by depriving them of their human rights, their freedom of expression, that that is racist and unlawful.

STUART REES, CENTRE FOR PEACE AND CONFLICT STUDIES: Well I received five pages of accusations along those lines, so did a student, so did Professor Lynch and each page read like a series of threats. Each page …

LEIGH SALES: And just let’s just cut to the chase: what’s your response to what’s just been alleged there?

STUART REES: Well it’s a lot of nonsense. The notion even that Shurat Hadin is a civil liberties organisation is also a piece of nonsense.

LEIGH SALES: But what about dealing with what has been said there, that the BDS campaign is racist and discriminatory because it singles out Israel?

LEIGH SALES: OK. Mr Hamilton, the Executive Council of Australian Jewry has distanced itself from your litigation, saying that it’s inappropriate and counterproductive and that the most effective means of protest against the boycott movement is just a publicity campaign. What do you say to that?

ANDREW HAMILTON: What I say is that the Racial Discrimination Act and other laws were put in place to protect individuals and organisations from discrimination, from boycotts, from divestment, from sanctions based on their national ethnic origin. It’s perfectly OK for the BDS movement to criticise Israel’s policies and the suggestion that that is any suppression of that just requires reading Haaretz, the Israeli newspaper which criticises Israel’s policies every single day. There’s plenty of freedom of press in Israel, in fact probably as much as Australia. But targeting individuals because you dislike the policies of the country where they’re from is against the law, just like if you targeted Japanese restaurants for boycotts because you didn’t like the Japanese whaling policy or you targeted Indian individuals for boycott because you didn’t like the Indian car system. You can’t take out your dislike of the policies of a country by taking it out on their nationals or people of that race. That is discriminatory. That crosses the line. That is not freedom of expression.

LEIGH SALES: Lets – sorry, we’ve got such a long delay to Tel Aviv, it’s going to be quite hard to deal with that, but I’ll do my best, sorry, to not cut you off. Professor Rees, I do want to ask you to respond to that though. What do you say that – you’re perfectly able to criticise Israel’s policies, but you just can’t target individuals because you don’t like what their country does?

STUART REES: Well, the issue is about the institutions that don’t observe the universal human rights which we’ve signed up to and are committed to. And with regard to Mr Hamilton’s assertions that it’s against the law – that’s all he’s got, is a lot of confidence in his assertions. Numerous courts in America, in Scotland, in London, have told people like those who represent Shurat Hadin that they must not use litigation for political purposes and a lot of the judgments have been about the bullying of this foreign agency.

LEIGH SALES: But is it right for you and your supporters to bully, if you like, say, Israeli academics because you don’t like the policies of the Israeli Government?

STUART REES: No, no, the issue – that’s not the issue here. Let’s get to exactly what happened. My colleague refused to give his signature on the request for approval of a scholarship. There are 3,000 other academics at Sydney University who could and have given those signatures.

LEIGH SALES: And on what grounds was that refused?

LEIGH SALES: But simply because this person was Israeli?

STUART REES: No, no, because he was part of the Hebrew University of Jerusalem. Part of one of its campuses sits on occupied land, it has contracts with armaments industry, it has a military college in which it trains officers who are part of the occupation and oppression of a people.

ANDREW HAMILTON: Excuse me. OK. The drawing of a line between a particular Israeli academic and the location of his university is a ridiculous extension. The person was boycotted – and Jake Lynch has admitted this – is boycotted because he was Israeli. This particular professor, Dan Avnon, has set up institutions where Arabs and Jews and Christians and Muslims all learn together. He is one of the most critical – he’s a very critical person of the Israeli Government, yet he was boycotted purely because he was Israeli and Jewish. And saying that because his campus is located across some imaginary line is basically saying, “We’re boycotting him because he’s Israeli and Jewish,” because you can find that link to every Israeli Jewish person, some obscure link.

The suggestion that courts in other countries have found in favour of BDS is also quite incorrect. In France and in Germany, courts have found against BDS. And when BDS crosses the line and attacks individuals because of their racial or national origin, that is when BDS will be held up to account. And let me point out that this action relies on the very same human rights provisions …

LEIGH SALES: Gentlemen, gentlemen, I’m sorry – I’m sorry, Mr Hamilton. I’m sorry, and I just once again mention that delay which is making it so hard. We’re unfortunately well out of time. We will continue to monitor this case though and hopefully speak to both of you again. Thank you very much for your time.

In what could set an international precedent, an Israeli civil rights organisation is suing an Australian academic for his support of a boycott movement against Israel, prompting plenty of debate.