Israel summons Irish envoy for dressing down over anti-settlement bill 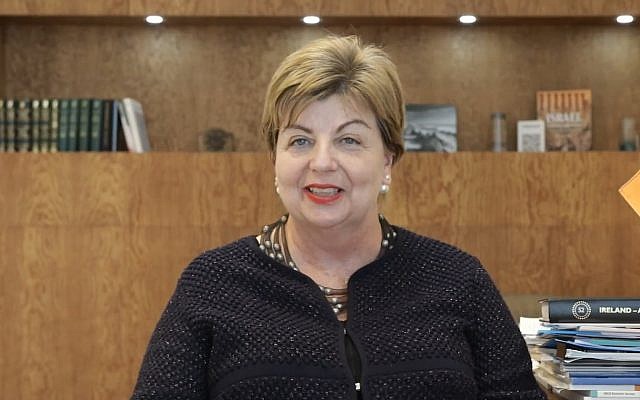 The Foreign Ministry on Wednesday summoned Irish Ambassador to Israel Alison Kelly for a dressing down after the upper house of Ireland’s parliament advanced legislation that would criminalize the import and trade of goods produced in the settlements.

Kelly was told to arrive at the ministry Thursday to be reprimanded. She has been summoned several times in the past over Irish policies concerning the Palestinians.

Earlier on Wednesday, the Control of Economic Activities (Occupied Territories) Bill 2018 passed a second reading by the Irish Senate, known as Seanad Éireann, with 25 “yes” votes, 20 “no” votes and 14 abstentions.

The bill still faces several hurdles before it becomes law.

The advancement of the legislation was denounced by Israel and hailed by Palestinian officials and Arab Israeli Knesset members. 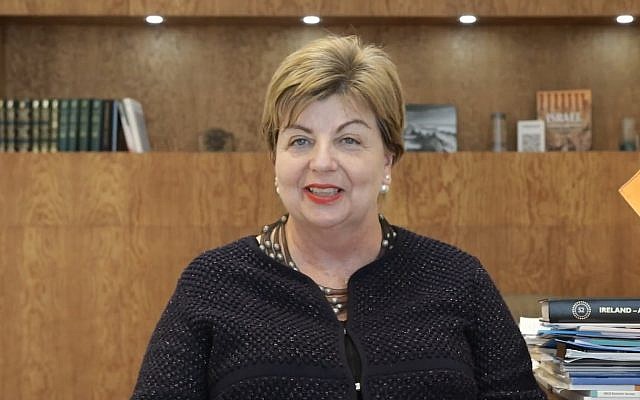 “The Irish Senate has given its support to a populist, dangerous and extremist anti-Israel boycott initiative that hurts the chances of dialogue between Israel and the Palestinians; it will have a negative impact on the diplomatic process in the Middle East,” the Foreign Ministry said in a statement.

“The absurd in the Irish Senate’s initiative is that it will harm the livelihoods of many Palestinians who work in the Israeli industrial zones affected by the boycott,” read the statement, issued by the ministry’s spokesperson, Emmanuel Nahshon.

“Israel will consider its response in accordance with developments regarding this legislation.”

The Palestinians, meanwhile, celebrated the vote.

“This courageous step builds on the historic ties between Ireland and Palestine, as well as it shows the way forward for the rest of the European Union,” top Palestine Liberation Organization official Saeb Erekat said in a statement issued before the vote was taken.

The Joint (Arab) List also welcomed the bill, saying it hoped it would “mark the beginning of a new stage in which Israel starts to pay an international political, economic and moral price for its actions.”

The bill’s passage would start “a new stage in treating the Zionist lobby as a danger the values that Europe claims to represent,” the Arab Israeli party said.

The government in Dublin — known to be one of the most pro-Palestinian governments in Europe — opposed the bill, arguing that it is not legally entitled to curtail trade with Israeli companies based in the settlements.

The proposed legislation — a private member bill — declares it an offense “for a person to import or attempt to import settlement goods.”

Likewise, those who “assist another person to import or attempt to import settlement goods” would be committing a crime punishable by up to five years in prison, if the bill were to become law.

While the bill does not mention Israel and the Palestinian territories, critics have charged that it appears to have been written exclusively with the Israeli-Palestinian conflict in mind.

The bill has at least half a dozen legislative obstacles to clear, including several readings in the lower house of Ireland’s parliament, known as Dáil Éireann, before it can be signed into law by President Michael Higgins.

“The initiative gives backing to those who seek to boycott Israel and completely contravenes the guiding principles of free trade and justice,” Netanyahu said, hours before the planned vote.

Israel summons Irish envoy for dressing down over anti-settlement bill