“Dubula iJuda”…and the lid blew off

A very telling tale from South Africa on the Israel boycotters. "Kill the Jews" had always expressed underlying sentiment. But it must never be said out loud. 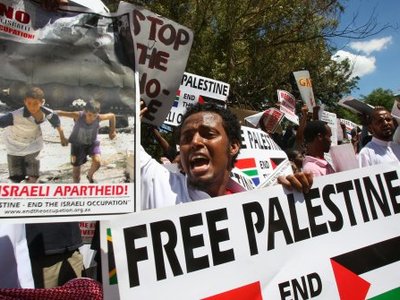 Words in the Xhosa tongue exposed the cover of anti-Zionists talking in mother tongues by the score. A riddle wrapped in a mystery – until the words are put into English.

‘Dubula iJuda:’ Kill the Jews, a boycott mob chanted at patrons of a campus jive in Johannesburg. The artists were Israeli and the promoter was a Zionist body – two combustible elements to ignite even a well-disposed mob. Dubula iJuda!

Boycott leaders had no choice but to recoil in horror. “We condemn any and all incitement to violence and racism — including anti-Semitism and anti-Zionism” declared Farid Esack, Director of BDS South Africa. Not to be outdone by a Muslim, Jewish boycotters condemned the chant “in the strongest terms” and couldn’t fathom how Muhammed Desai, who runs BDS affairs, could defend the chanters.

Not even the Palestine Solidarity Forum offered an excuse. The chant had “unacceptable and explicit anti-Semitic elements” said different chapters of the Forum, demanding that comrades make a public apology.

Were these public statements from stricken figures or just plain embarrassed ones?

Half and half. It both horrified and embarrassed boycott leaders to see the true colours of the movement unfurled to all and sundry. Reports and commentaries on the event got it all wrong. If there was a schism between the hooligan mob and contrite leaders it was over the mob’s stupid display of the Jew-hatred that leadership had been at great pains to hide.

Now the lid had blown. ‘Kill the Jews’ had always expressed the aspiration of boycotters, high and low, Muslim and Jew, Christian and atheist, spokesman and placard wielding chanter. Will sophisticated racists ever forgive their Xhosa comrades!

The lid was off; the emperor was stripped of his clothes, his unlovely soul bared to public gaze. Hence the ungainly scramble to higher ground. Farid Esack and company had to distance themselves fromDubula iJuda as far and as fast as they could. Frankenstein, their work of years, their indoctrinated monster taught to execrate devil Jews, had cut loose and was out of control.

All lies! the cry will go forth. Be ready for it. Prepare to demonstrate that Esack and cohorts are not pro-Palestinian but anti-Jew. Read them their own charter; lay at their feet their own behaviour. Go to the boycotter, oh sluggard. Consider his ways and be wise.

Take some object — a leaf — under a magnifying glass. Unfocused, the glass filters weak sunlight around the leaf. Now position it so that the sun’s power is concentrated in a point no bigger than a pinhead. Hold the pinhead steady over the leaf until it burns hot enough to set the leaf aflame.

Now apply the image to the behaviour of boycotters. A dispersed weak focus is the trademark of their interest in Palestinians, where ever that unhappy refugee-people may live. No heat results. Nothing catches fire. War-torn Syria displaces Palestinians by the thousands; drops deadly gas on them. Lebanon stops Palestinians from entering; the near half a million that have lived for generations in Lebanon get third class treatment.

Egypt closes tunnels into Gaza, strangling the life out of Palestinians in the strip. Meanwhile look at boycotters. They get on with their lives.

Now reposition the magnifier onto Palestinians living in the West Bank. Here’s an incredibly small parcel of land occupied by Jews. The pinpoint focus burns into boycotters. They catch fire and, in that vulgar phrase, all hell breaks loose.

What does that tell you? Where do boycotters have their sights fixed? Not on Palestinians; they as good as told us that by getting on with their lives regarding Palestinians living elsewhere. No, their sights are fixed on the other people under the magnifier – on the Jews. It’s that people, not the Palestinians that make boycotters burn. The Jews make them catch fire.

What does it mean to be anti-Semitic? It does not mean a harmless bad opinion of the Jewish people. It’s a full-blooded, all consuming passion, a many-headed obsession. No Jew has catalogued and described the condition so well as a non-Jewish French playwright and socialist philosopher.

Jean-Paul Sartre describes the anti-Semite’s fight against evil, personified by the Jew. He “wants to unmask evil, denounce and measure its extent. That is why he is so obsessed with piling up anecdotes that reveal the lubricity of the Jew, his appetite for money, his ruses and crimes. The anti-Semite bathes his hands in ordure.”

Another passion is to kill off Jews. Not all anti-Semites, observes Sartre, demand their death openly. But none “would raise a little finger to save Jews from violence. And the measures they propose, aimed at the Jew’s debasement, at his humiliation, at his banishment, are substitutes for the assassination they meditate within themselves. They are symbolic murderers. The fits of anger which seize anti-Semites, the diatribes they hurl at Yids, are capital executions.”

Both expressions of hatred confront us daily. We know the way boycotters pile crime upon crime on Israel, the way they bathe their hands in ordure. And we know the regard they have for Hamas, how they view Hamas as a legitimate struggle body. We know too of a charter that declares war against the Jews — not against Israel, mind. A struggle body! The struggle of Hamas, dear boycotter, is to exterminate Jews, behind rocks and trees or wherever else the ‘vermin’ choose to hide.

And without lifting a finger, oh boycotter, you’d let the exterminators do their work. After all, they’d be doing it for you, wishful assassin of Jews. When you lobby for one state, for a Muslim majority over the whole of ‘Palestine’ you know perfectly that it would throw Jews to the same Islamic order that kills and persecutes and expels Christians, before your very eyes, in many parts of the world. The Copts in Egypt are all but finished. Dubula iJuda – feed Jews into that voracious mouth.

Look also to the demands boycotters make upon Israel. It must demolish a barrier and go back to the time when thousands of Jews were murdered and maimed. It must allow millions of Arab refugees to flood the territories, to bring a Muslim majority about in one shot. Jews must give up a stable, free, economic dynamo of a country to make way for yet another failed or riotous Islamic state.

Dubula iJuda! The chanting mob was honest. Why cannot the BDS movement lobby against Jews openly, as political parties in Europe do? What stops it presenting its real platform to the public? The great boycott figure Noam Chomsky likes the movement’s cloak and dagger culture no better: “Targeting Israel alone can be attacked as anti-Semitism, and unfortunately with justice”.

For all his hatred of Israel, another boycott icon, Norman Finkelstein manages to retain a semblance of integrity. “The BDS movement ….is a hypocritical, dishonest cult led by dishonest gurus who … try to cleverly pose as human rights activists, whereas their real goal is the destruction of Israel.”  Even the movement’s founder and global leader, Omar Barghouti, has moments of honesty. He admits that the true aim is “euthanasia” for Israel.

What imperative could there be for Farid Esack and company to deceive? Let them lobby against Jews without resort to a phony agenda. Let them appeal to public opinion wearing their true colours.

Steve Apfel is director of the School of Management Accounting, Johannesburg. He is the author of the book,‘Hadrian’s Echo: The whys and wherefores of Israel’s critics’ (2012) and a contributor to, “War by other means.” (Israel Affairs, 2012). His articles and blogs are published in several foreign journals and his new work, ‘How the West was won’ is due out next year

“Dubula iJuda”…and the lid blew off

A very telling tale from South Africa on the Israel boycotters. "Kill the Jews" had always expressed underlying sentiment. But it must never be said out loud.