The boycott bill is the latest in a series of measures taken by Chile's Congress and municipalities in the South American country. 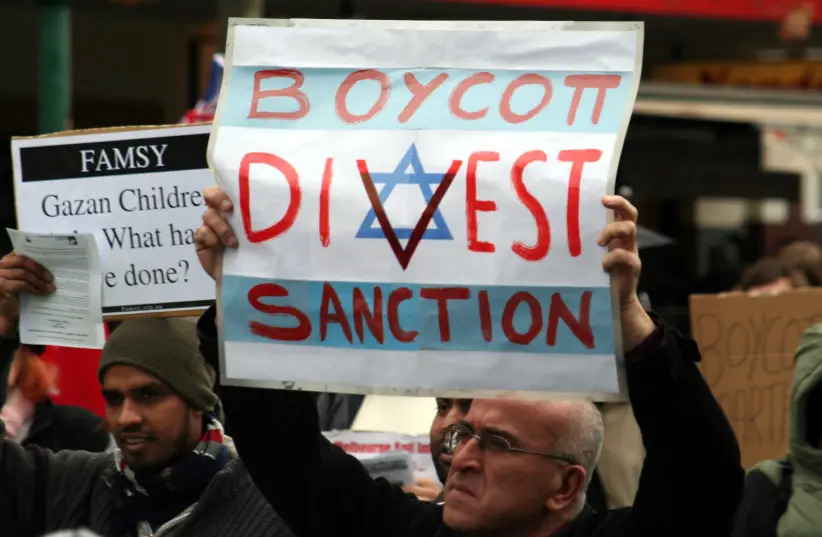 The Chilean Congress has drafted a bill to boycott goods, services and products from Israeli settlements, with Jewish Chileans expressing outrage at the latest anti-Israel move by Chilean parliamentarians.

The bill was drafted by the Chile-Palestine Inter-Parliamentary Group in the Chamber of Deputies of the Chilean Congress.
While the bill refers only to “territories occupied illegally” and does not make any specific mention of Israel or the Palestinian territories, Sergio Gahona – the leader of the initiative and a deputy of Chile – and a number of other parliamentarians referred to the bill as targeting Israel.
Gahona dressed in a Keffiyeh (an Arabian headdress) when he announced the bill, according to the Palestinian Community of Chile.
The bill calls for importers of products or services from “illegal settlements in occupied territories, as determined in accordance with international law and declared to be such,” to be penalized with the punishments associated with the crime of smuggling.

Punishment could include a fine of up to five times the customs value of the goods.

Chile is thought to be home to the largest Palestinian diaspora community outside of the Middle East.
The Jewish Community of Chile and the Chilean Community of Israel condemned the bill, expressing outrage that parliamentarians were focusing on boycotting Israel while Chile is suffering from a political, social, economic and health crisis.
“If a motion like this is successful, we would be the only country in the world to take a trade boycott measure of this magnitude against a democratic state like Israel,” wrote the Jewish Community of Chile in a statement on Thursday.
The Jewish community warned that the motion “creates a clearly hostile environment against the members of the Jewish community in our country, which is reflected in various forms of aggression and antisemitism, which have increased alarmingly in recent weeks.”
The Chilean Community of Israel stated that it was “definitely not surprised by the presentation of the BDS bill.”
“They have been announcing the project, along with several antisemitic legislations through the last couple of years,” said Gabriel Colodro, president of the Chilean Community of Israel. “We are sadly witnessing how Chile, at least, the Chilean Congress, turns to becoming one of the most antisemite (sic.) legislative bodies in the world.”
The bill is the latest in a series of measures taken by Chile’s Congress and municipalities in the South American country.
In 2020, the Chilean Senate approved a resolution calling on Chilean President Sebastián Piñera to adopt a law boycotting settlement goods and banning commercial activity with companies that operate there. A similar resolution was approved in 2018.
Additionally in 2018, the Valdivia municipality decided to ban the city from signing contracts with any company linked to Israel. The Chilean National Comptroller later decided that such a move was illegal, as only the head of state could decide on such a boycott.
Jeremy Sharon and Lahav Harkov contributed to this report.

The boycott bill is the latest in a series of measures taken by Chile's Congress and municipalities in the South American country.