“As once Jewish businesses were boycotted, some civil-society leaders today call for …. the shunning of Israeli academics” 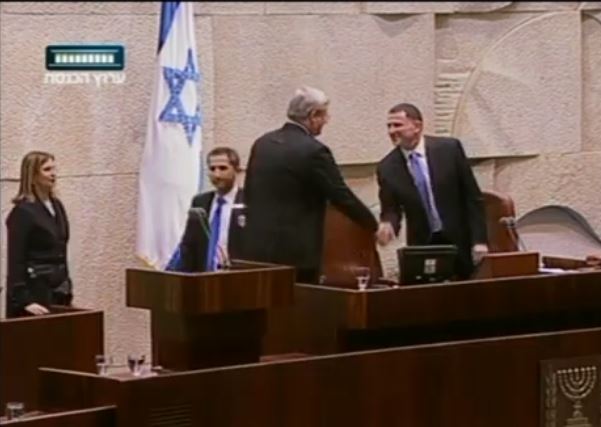 You can now add Canadian Prime Minister Stephen Harper to the growing chorus who recognize the Boycott, Divest and Sanction movement for what it is — as former Harvard President Lawrence Summers put it, anti-Semitism “in effect” if not “in intent.”

Harper addressed the Knesset today, and voiced unflinching support for Israel (video added at bottom of post).  The part that addressed the international boycott movement was of particular interest, considering what has happened this past month with regard to the American Studies Association.

Third, we refuse to single out Israel for criticism on the international stage. Now I understand, in the world of diplomacy, with one, solitary, Jewish state and scores of others, it is all too easy “to go along to get along” and single out Israel. But such “going along to get along,” is not a “balanced” approach, nor a “sophisticated” one; it is, quite simply, weak and wrong. Unfortunately, ladies and gentlemen, we live in a world where that kind of moral relativism runs rampant. And in the garden of such moral relativism, the seeds of much more sinister notions can be easily planted.

And so we have witnessed, in recent years, the mutation of the old disease of anti-Semitism and the emergence of a new strain. We all know about the old anti-Semitism. It was crude and ignorant, and it led to the horrors of the death camps. Of course, in many dark corners, it is still with us. But, in much of the western world, the old hatred has been translated into more sophisticated language for use in polite society. People who would never say they hate and blame the Jews for their own failings or the problems of the world, instead declare their hatred of Israel and blame the only Jewish state for the problems of the Middle East.

As once Jewish businesses were boycotted, some civil-society leaders today call for a boycott of Israel. On some campuses, intellectualized arguments against Israeli policies thinly mask the underlying realities, such as the shunning of Israeli academics and the harassment of Jewish students. Most disgracefully of all, some openly call Israel an apartheid state. Think about that. Think about the twisted logic and outright malice behind that: A state, based on freedom, democracy and the rule of law, that was founded so Jews can flourish, as Jews, and seek shelter from the shadow of the worst racist experiment in history, that is condemned, and that condemnation is masked in the language of anti-racism. It is nothing short of sickening.

(At this point in Harper’s address, several Arab Knesset members, some of whom had earlier heckled him, got up and left the Knesset chamber. Prime Minister Benjamin Netanyahu and other Knesset stood to applaud Harper.)

But this is the face of the new anti-Semitism. It targets the Jewish people by targeting Israel and attempts to make the old bigotry acceptable for a new generation.

Thank you Prime Minister Harper, for speaking the truth in a world gone mad.

Keep the Prime Minister’s comments in mind as you read how NYU Professor Lisa Duggan, incoming President of the ASA and a big BDS supporter, has been bragging about how much money ASA has and how the rejection of the ASA boycott has not impacted ASA operations:

I am happy to report that ASA is in *excellent* financial health. There have been no expenditures from our substantial trust fund (of more than $1 million), and our revenues are up (we have more new memberships than resignations since the boycott vote). The legal threats against us are all empty and baseless. But if a frivolous lawsuit is filed, we have excellent pro bono legal representation through CCR. The note above re: fundraising is so that we can fund the travel of Israeli and Palestinian scholars were are inviting to our 2014 conference (to show we are not boycotting individual scholars, but actively seeking collaboration with Israelis), and to hire some PR consultants to help us respond to attacks, without dipping into our trust fund. I know you will be delighted to hear this, as a co chair of an ASA committee I know you must be concerned with the health and stability of the association.

Prof. Duggan mistakes financial solvency for success.  She soon will be leading a discredited organization, one which is best known as a leading example of the mutation of the old anti-Semitism into the new form acceptable in polite solicety.

“As once Jewish businesses were boycotted, some civil-society leaders today call for …. the shunning of Israeli academics”