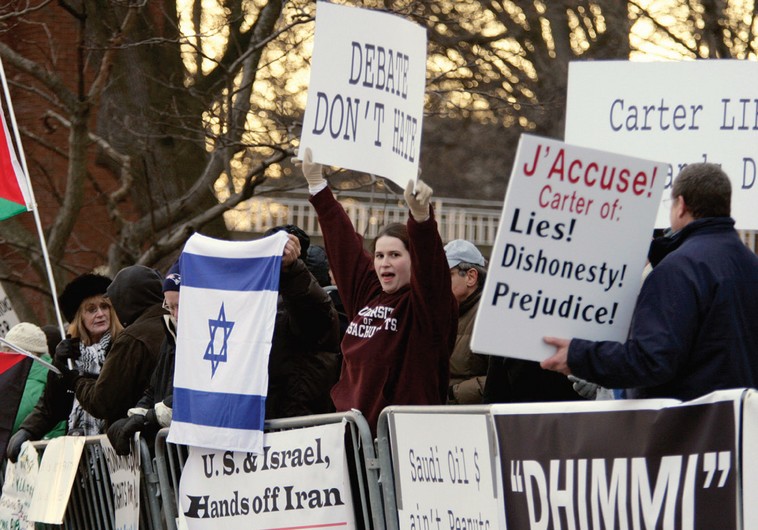 The infamous Boycott, Divestment, and Sanctions (BDS) campaigns and “apartheid week” displays on college campuses are not the only threat to Jewish students. A much greater threat looms: the inability for students to publicly defend their beliefs. While universities claim to be havens of open debate and intellectual curiosity, they are in reality black holes of political correctness. On campus, only certain ideas are worthy of consideration and Zionism is definitely not one of them. This culture doesn’t just threaten members of the Jewish community, who are terrified to challenge those who accuse Israel of the most heinous crimes. Rather, it threatens all of us who value free speech and its ability to encourage criticism, debate, and original thought on college campuses.

While speech codes are thought to be a thing of the 90s, the truth is that college students today are facing the most serious threats to their civil liberties. From “trigger warnings” to “free speech zones,” universities are slowly training students to become hypersensitive and incapable of deviating from ideologies that are in vogue.

But unlike the 90s, universities are now controlling speech in a much more insidious manner. Speech codes today manifest in vague and poorly written policies that try to protect students against harassment, sexual assault, and bullying. Seemingly, these policies serve the best interest of students who face these issues on campus. But practically, they give university administrators the power to punish students for harmless speech protected by the First Amendment, while ignoring due process for the accused.
It is shocking how many universities have such policies. Lehigh University, for example, defines harassment as “…unwelcome statements, jokes, gestures, pictures, touching, or other conducts that offend, demean, harass, or intimidate.” I suppose they weren’t planning to invite Sarah Silverman (or any other decent comedian) anytime soon. Georgetown University’s Code of Student Conduct includes punishable measures against incivility defined as behavior that “disrespects another individual.” Since when is being disrespectful a crime? In Minnesota, St. Olaf College has a policy that disallows “creating or posting material that is offensive” on a campus computer. In other words, no emailing political memes, cartoons, or opinion articles…all of which could potentially offend someone.

Therein lies the real danger. How can we punish students or professors for saying something that might be understood as disrespectful? And should universities have the authority to decide what does and does not fall under these definitions on a case-by-case basis? For many students, the positions that conservatives take on social issues are offensive: anti-gay marriage, anti-abortion, etc. But that shouldn’t mean that these positions are illegitimate and that those who hold these opinions should be discriminated against. These policies, though, allow for exactly that.

The problem for Jewish students is that showing support for Israel on campus can be very offensive to anti-Israel students. Despite being the only progressive democracy in its region, many college students are absolutely convinced that Israel is to blame for all the problems of the Middle East. University departments, professors, and student groups are all actively pushing an anti-Israel agenda through divestment campaigns, apartheid week protests, and bigoted propaganda. They create a colonialist narrative that depicts Israelis as powerful white Westerners taking over an indigenous and vulnerable Arab population. As such, students regularly accuse Israel of crimes against humanity and label her supporters as promoters of those crimes.
Emboldened by anti-free speech policies created by administrations and by a “PC” culture, students are outraged when their peers try and pollute their egalitarian learning environment with offensive ideas (i.e. a Jewish state). So when pro-Israel students openly defend Israel against her haters, breaking down the intellectually homogeneous bubble Students for Justice in Palestine (SJP) and its followers try to create on campus, students are left with no other option but to silence their opponents.

Examples of this are endless. In 2011, SJP at Rutgers barred Jewish protestors from their ‘free and open to the public’ event that equated genocide in the Holocaust to destruction in Gaza. While most guests entered for free, as advertised, those with Jewish garb were forced to pay an entrance fee or leave.

At UC Irvine, in an attempt to silence his message and demonize his character, anti-Israel students disrupted the then US ambassador to Israel, Michael Oren, during his speech on campus. The first one to do so shouted, “Michael Oren, propagating murder is not an expression of free speech” as he took the stage. Others joined in, cheering, booing, and screaming at him while he tried to address the audience.

Perhaps one of the most egregious assaults on campus free speech happened in 2006 at San Francisco State University. Members of the College Republicans, in an anti-terrorism protest, stomped on the flags of Hamas and Hezbollah (both US-designated terrorist organizations). The student protestors were unaware that these flags contain the word “Allah” inscribed in Arabic. Offended by the protest, a student went to the administration complaining that the demonstration created a “hostile environment.” Officials agreed and soon after informed the president of College Republicans that the school would be taking disciplinary action. Were the College Republicans being insensitive to their peers? Perhaps. But insensitive speech is protected speech and cannot be criminalized by universities.

At my own school, the University of Wisconsin-Madison, the newly formed pro-Israel organization Madison Israel Club (MIC) has already experienced the dangers of idea discrimination. A student leader in MIC recently submitted an opinion piece to the student newspaper discussing matters related to the Israeli-Palestinian conflict. In it, the author argues that the core issues in the conflict, such as Hamas’ vile use of human shields, are often ignored in American media and on college campuses.

While her claim that there is no definitive proof that Hamas uses civilians as human shields is in itself troubling (there is overwhelming video and photographic evidence of this), perhaps what is most disturbing is her push to change the author’s message…in an opinion piece. Must all editorials be based entirely in objective, definitive, empirical evidence? If that were the standard, surely they would never be able to allow anti-Israel authors who accuse Israel of apartheid, ethnic cleansing, and genocide to publish anything, ever.

I would argue that these anti-Israel claims are rooted in intolerance, perhaps even anti-Semitism. Still, they should not be silenced because of their offensive nature. Opinion articles are supposed to be full of controversy, bias, and information that may or may not be agreeable to readers. If we are concerned about egalitarianism then the answer is not to limit speech, it is to encourage it. It is not the place of college newspaper editors or university administrators to determine what kind of material college students can or cannot be exposed to.

The anti-speech movement on college campuses has implications far beyond the pro-Israel movement. It is a dangerous trend towards stifling debates and dismissing legitimate points of view. Ironically, the effort to create tolerance and equality by being overly cautious about what is said has only created an atmosphere of fear for those who have unpopular opinions. Administrators need to be training students to think critically and openly, rather than granting them the ability to filter ideas that may be unpleasant and punishing those who stir harmless controversy. The real education, after all, is not in the classroom. It is outside—where students consider, challenge, and debate their ideas. To destroy these critical opportunities is to destroy the educational process itself.