Rebuffing Palestinians, FIFA says it’s ‘not a playground’ for politics 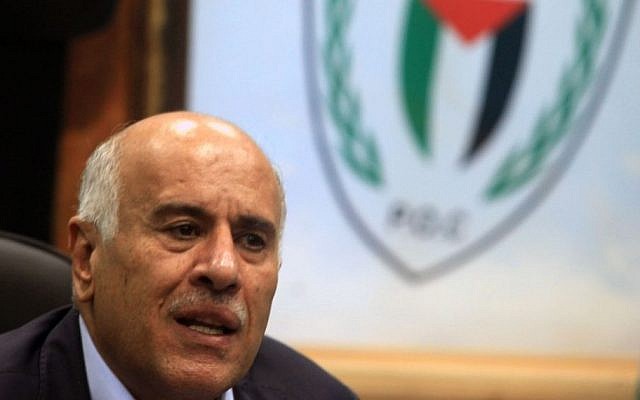 Unrelenting Palestinian efforts to have Israel sanctioned by FIFA over Israeli soccer clubs’ activity in the West Bank have deeply angered the world soccer organization, according to a Tuesday report from Hadashot news (formerly Channel 2).

FIFA has rejected the request by the Palestinian Football Association that it take punitive action against six Israeli teams based in settlements beyond the Green Line.

The Palestinian group argued that the clubs breached FIFA statutes forbiding member associations from playing in another nation’s territory without permission.

Israel said that FIFA rules are unenforceable as there is no permanent, recognized border in the area.

In its decision Friday, FIFA appeared to accept the Israeli position.

According to Hebrew media reports, FIFA views the matter as a political dispute between Israelis and Palestinians and has thus elected not to intervene.

The PFA — headed by senior Fatah official Jibril Rajoub — has not given up its efforts to have Israel punished and has turned to the international Court of Arbitration for Sport.

FIFA President Gianni Infantino sent a letter to United Nations Secretary-General Antonio Guterres, saying his organization was tired of being pulled into internal political matters. “We are not the playground of the Israeli-Palestinian conflict,” Infinino wrote, according to Hadashot news.

Rebuffing Palestinians, FIFA says it’s ‘not a playground’ for politics