Controversy abounds ahead of Friday’s Bundestag debate on 3 anti-BDS resolutions: one backed by 4 mainstream parties, one by the far-right, and one by the far-left

Amid growing controversy, the German parliament is set to pass a resolution on Friday condemning the anti-Israel Boycott, Divestment and Sanctions movement. The text condemns BDS as anti-Semitic and urges the government not to fund or support groups or activities that question Israel’s right to exist and to defend itself.

This non-binding resolution is sponsored jointly by Chancellor Angela Merkel’s Christian-Democratic Union and the Social Democrats — the Bundestag’s two largest parties, which make up the governing coalition — as well as two opposition parties: the Greens and the pro-business Free Democratic Party.

In addition, lawmakers will also vote on two other resolutions against BDS, proposed by two opposition parties: the far-right Alternative for Germany (AfD), and the far-left Die Linke, respectively.

The AfD draft, the only one that calls on the government to outlaw the boycott movement, has little chance of garnering a majority. The Die Linke text is the softest of the three, sufficing with urging Berlin to condemn “anti-Semitism within” the BDS movement. It, too, has virtually no chance of passing.

The issue of how Germany should tackle calls for boycott of the Jewish state has stirred some controversy. Various critics — including a group of Israeli and Jewish academics — worry that equating calls for a boycott with anti-Semitism could stifle freedom of speech, and lament that it makes no distinctions between Israel proper and the settlements, which much of the international community consider illegal.

“There is no legitimate justification for anti-Semitic sentiments. The decisive ‘no’ to hatred on Jews, regardless of their nationality, is part of Germany’s raison d’etat,” the coalition-backed resolution [German] reads. “It is intolerable that anti-Semitism has increased in recent years and continues to worry the Jewish community.”

The bill pledges that Germany will “strongly oppose” efforts to defame Jews or to question “the Jewish and democratic State of Israel’s right to exist, or right to self-defense.”

Germany continues to support a two-state solution in accordance with several United Nations resolutions, leading to a “Jewish, democratic State of Israel and an independent, democratic and viable Palestinian state,” the resolution reads.

Specifically tackling BDS, the text declares that “all-encompassing calls for boycotts in their radical nature lead to the stigmatization of Israeli citizens and citizens of Jewish faith as a whole. This is unacceptable and worthy of the sharpest condemnation.”

“The arguments and methods of the BDS movement are anti-Semitic” and reminiscent of Germany’s Nazi past, the resolution states.

“The German Bundestag condemns all anti-Semitic statements and attacks that are disguised as criticism of policies of the State of Israel, but in reality express hatred for Jewish persons and their religion, and will forcefully oppose them.”

The resolution concludes with a detailed call on federal and local government institutions not to give any funding or logistical support to groups that promote boycotts of Israel or question its right to exist. 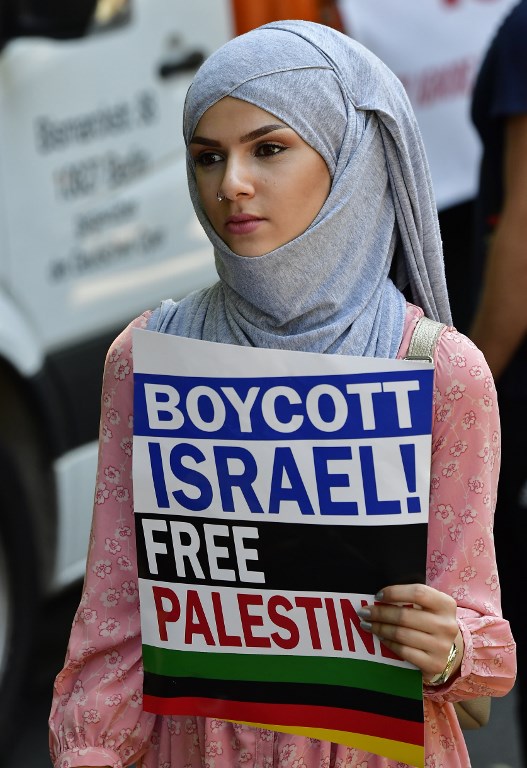 According to Spiegel Online, Germany’s most widely read news outlet, lawmakers from the Greens and the Social Democrats originally wanted to add a sentence to the resolution stressing that “criticism of Israeli government policies” are protected free speech laws and must remain allowed.

But at the behest of the Free Liberal Party, this clause was removed, because, as one MP told the website, “criticism of foreign governments is self-evident, and doesn’t need a special mention.”

It is perhaps ironic that the coalition-backed resolution, which is expected to pass with a large majority, is criticized by the populist Alternative For Germany as too weak on BDS.

The party, known by its German acronym AfD, is taboo among German Jewish community leaders and Israeli officials. Jerusalem’s ambassador in Berlin, Jeremy Issacharoff, reiterated last week that he avoids all contact with the party, due to its alleged nostalgic sentiments toward Nazi Germany.

The party’s alternative resolution [German] denounces the distinction made by many in the international community between Israel proper and settlements, including the demand for labels to be placed on Israeli goods made in the West Bank, as a form of boycott. The labeling regime instituted by the European Union and other countries created a “de facto economic recognition” of an independent Palestinian state, “without this being legitimate in any form,” the AfD text laments.

It not only calls on the government to “prohibit” the BDS movement, but also to “recognize the injustice done to Jewish settlers in Palestine by Arab calls for boycott in cooperation and coordination with the Nazi regime.”

The resolution backed by the mainstream factions leaves “a loophole for the ruling parties to keep funding BDS groups, as they have been for years,” AfD foreign policy spokesman Petr Bystron charged in a press release issued Wednesday.

“The majority-party bill only wants the government to stop funding ‘BDS events’ and ‘projects,’ not groups, and says nothing about a ban of such groups,” the freshman MP lamented.

Beatrix von Storch, one of the AfD’s most prominent members, vowed to “continue to fight against the misuse of German taxpayer funds to support anti-Israel NGOs.” Von Storch co-founded the Friends of Judea and Samaria in the European Parliament, the party said.

The third draft, by the far-left Die Linke, also condemns anti-Semitism and expresses “unlimited solidarity” with the Jewish people’s “historic emancipation” that culminated in the founding of the State of Israel. At the same time, it acknowledges Palestinian suffering following the 1948 War of Independence and the 1967 Six Day War, noting that this suffering is “deeply anchored as ‘nakba’ in the Palestinian collective memory.”

The Die Linke resolution [German] also condemns BDS, though it stops short of outright calling it anti-Semitic. Rather, it says that calls for boycotts are unacceptable and should be deplored “whenever they are reminiscent of anti-Semitic positions espoused by Nazi fascism.”

Finally, it calls on the government to “condemn any anti-Semitism within BDS calls to boycott Israeli scientists, artists and athletes, as well as Israeli goods and companies.”

Meanwhile, an online petition signed by more than 60 Israeli and Jewish academics argues that the “amalgamation” of calls for boycotts with anti-Semitism “is wrong, unacceptable and a threat to Germany’s democratic foundation.”

While some of the signatories — including well-known professors from universities in Tel Aviv, Jerusalem, Haifa, Beersheba, London and Paris — may dislike BDS, “we all reject the fallacious claim that the BDS movement as such is anti-Semitic, and we defend every person and every organization’s right to support it.”

The Germany embassy in Tel Aviv declined to comment on the resolutions.

Controversy abounds ahead of Friday’s Bundestag debate on 3 anti-BDS resolutions: one backed by 4 mainstream parties, one by the far-right, and one by the far-left
Skip to toolbar