Corbyn’s Labour, which may soon govern UK, is now an anti-Israel protest group 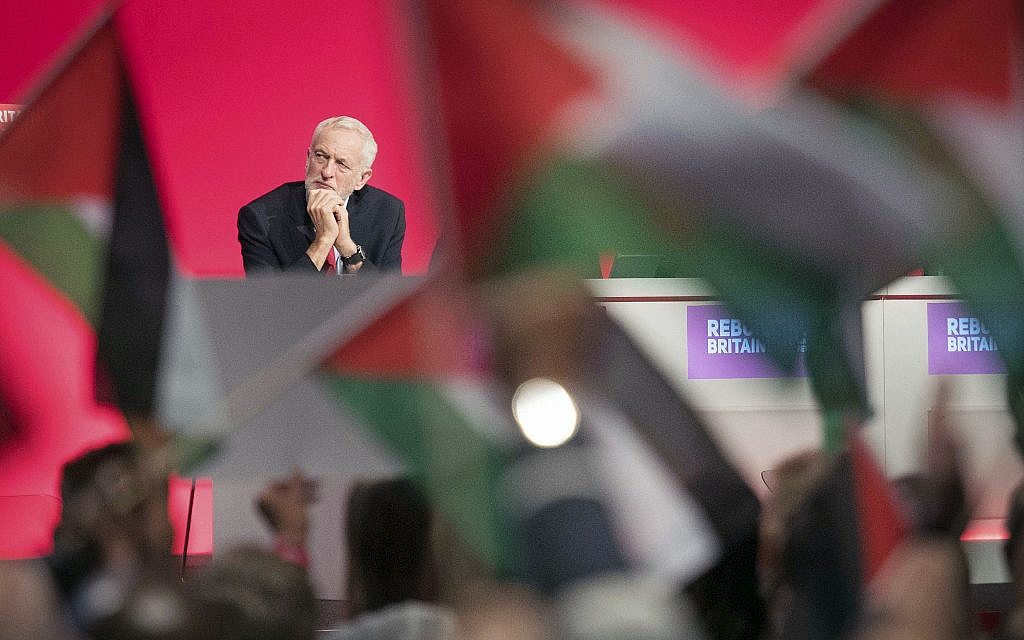 Anyone who questions whether Britain’s Labour party might have emerged from a summer of revelations about anti-Semitism a little chastened or contrite had their answer from its annual conference this week.

Nothing better illustrates Labour’s journey from credible party of government to a bastion of hard left activism than the image of Luciana Berger, a Jewish MP who has led the effort to call out anti-Semitism in its ranks, accompanied by a policeman as she walked around the Liverpool conference.

For the avoidance of doubt: this is not normal. With Britain’s relatively open, violence-free political system, only a few senior Cabinet ministers have bodyguards; backbench MPs, such as Berger, do not.

The police, however, clearly judged that the Jewish MP was a potential target — in the city she represents in parliament, and at a gathering of the party of which she is a member.

Just as the United States’ Republican party has been largely transformed into a likeness of US President Donald Trump, so Labour has come to wholeheartedly embrace Jeremy Corbyn’s ideology, inclinations and prejudices.

Hopes expressed on the eve of conference by the party’s moderate deputy leader, Tom Watson, that this week might mark the “beginning of the healing process and the rebuilding of trust between the Jewish community and the Labour Party,” were swiftly dashed.

Corbyn set the tone with his steadfast refusal to apologize or admit wrongdoing in a rare in-depth head-to-head interview on the BBC on Sunday morning.

In what was a seemingly calculated display of defiance, the Labour leader dodged the opportunity to “express personal remorse”; patted himself on the back for instituting “much better processes” for dealing with anti-Semitic incidents in the party; and defended both his defense of an anti-Semitic mural and his suggestion that British Zionists didn’t understand British irony.

Indeed, in interviews on Tuesday Corbyn showed little empathy for Berger when asked about her need for police protection and even appeared to have come to the view that he was, in fact, the real victim of the recent anti-Semitism revelations.

Asked again whether he had any regrets, he responded: “I’ve had a lot of things thrown at me over the summer; what I regret is the stuff thrown at me and the ill-informed nature of it.”

Certainly, his keynote speech Wednesday contained nothing beyond the tired bromides — pledging Labour to be “implacable campaigners against anti-Semitism and racism in all its forms” — that he has trotted out on previous occasions, combined with a promise to unilaterally and immediately recognize a Palestinian state if he comes to power.

As Margaret Hodge, the Jewish Labour MP who earlier this summer faced disciplinary action for confronting Corbyn over his failure to tackle anti-Semitism, suggested in response to the Labour leader’s interview at the start of the week: “Jeremy Corbyn has attracted praise for his consistency over the years. I wonder whether he is, in fact, guilty of insensitive stubbornness.”

It’s quite clear, though, that Labour’s approach is not just about Corbyn’s undoubted stubbornness. Instead, the party has, as the Jewish Chronicle reported, quite consciously attempted this week to put the summer’s rows over anti-Semitism behind it by going on the attack. It is another example of the “Trumpification” of Labour and how the British hard left is mimicking the tactics of right-wing US populists.

Len McCluskey, head of Britain’s most powerful trade union and Labour’s biggest donor, led the way with a series of salvos fired at Corbyn’s critics. In an address on the conference floor, he launched a thinly veiled denunciation of Hodge. To huge applause from delegates, McCluskey suggested: “Anyone screaming ‘you are a racist’ at Jeremy Corbyn has lost all sense of moral proportion … and every shred of decency.”

At a fringe meeting — events held away from the main conference floor — hosted by the virulently anti-Israel Palestine Solidarity Campaign, McCluskey peddled the line that those who had raised the issue of anti-Semitism in the party were doing so to silence Palestinian supporters.

“There is no doubt that there are those within our society and indeed around the world who would sooner not allow people to debate and discuss Palestine. If that was their goal it failed miserably,” he reportedly argued.

His remarks were a marginally more refined version of the conspiracy theory promoted by his fellow trade union leader, Mark Serwotka, that Israel had “created” the anti-Semitism row to draw attention from its own “atrocities” in Gaza.

For good measure, McCluskey went on to suggest that Labour’s belated adoption of the International Holocaust Remembrance Alliance definition of anti-Semitism and all its examples would not stop Labour “from supporting the Palestinian cause or calling Israel what it is — an apartheid state.” He also labeled the Israeli government “one of the most right wing in the world.”

McCluskey has previously branded talk of anti-Semitism in the party as “mood music” and denounced Jewish communal groups for their alleged “truculent hostility.” 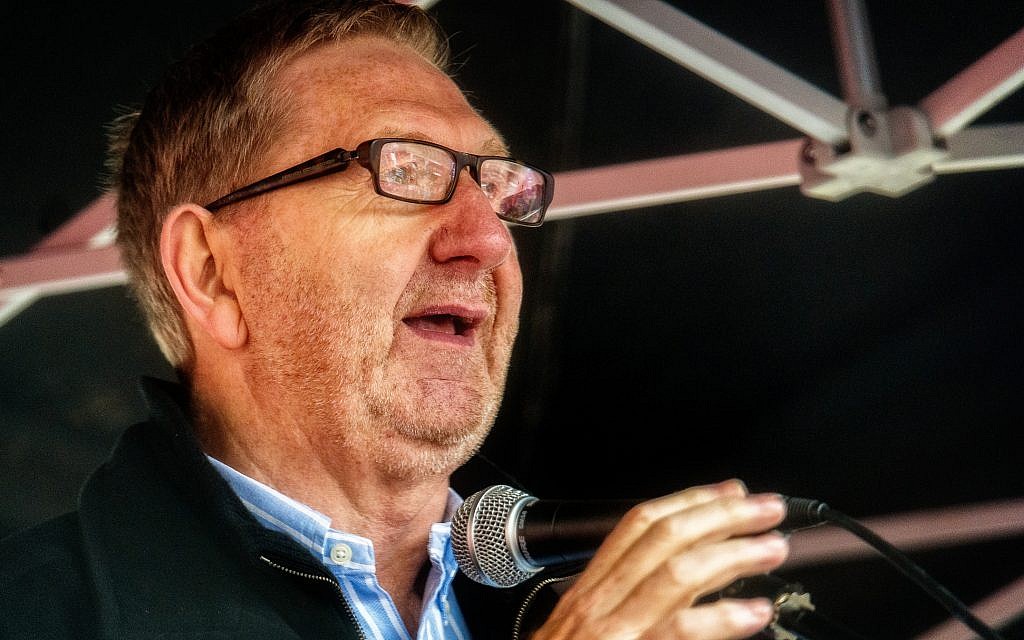 The attack was joined by Corbyn’s most prominent parliamentary outrider, Chris Williamson. At an event organized by the group Labour Against the Witchhunt, he denied that online anti-Semitic abuse was the work of Labour party members, and likened the furor to McCarthyism and the works of George Orwell.

“This is about bullying,” Williamson told delegates. “You know in a way we are living in the pages of George Orwell’s 1984. Good is bad, black is white and we had the Ministry of Truth and all the rest of it.”

“It is McCarthyism and McCarthyism came to an end and people stood up and called it out for what it was: a pile of bloody nonsense,” Williamson argued.

Williamson, from whom the Board of Deputies has urged Labour to withdraw the party whip, last year claimed that accusations of anti-Semitism within the party were a “dirty lowdown trick” being used for “political ends.”

As key and close supporters of the Labour leader, the notion that Corbyn could not prevent McCluskey and Williamson from adopting such an aggressive, hardline approach is far-fetched. Both could be reined in if he gave the word.

Their arguments were echoed on the conference floor where delegates attacked the “campaign of slurs and accusations of anti-Semitism” and one warned that: “As the prospect of a Jeremy Corbyn-led government gets ever closer I’m afraid the campaign will get ratcheted up and … the list of people being … denounced for being anti-Semitic … will stretch all the way from here to Jerusalem.” 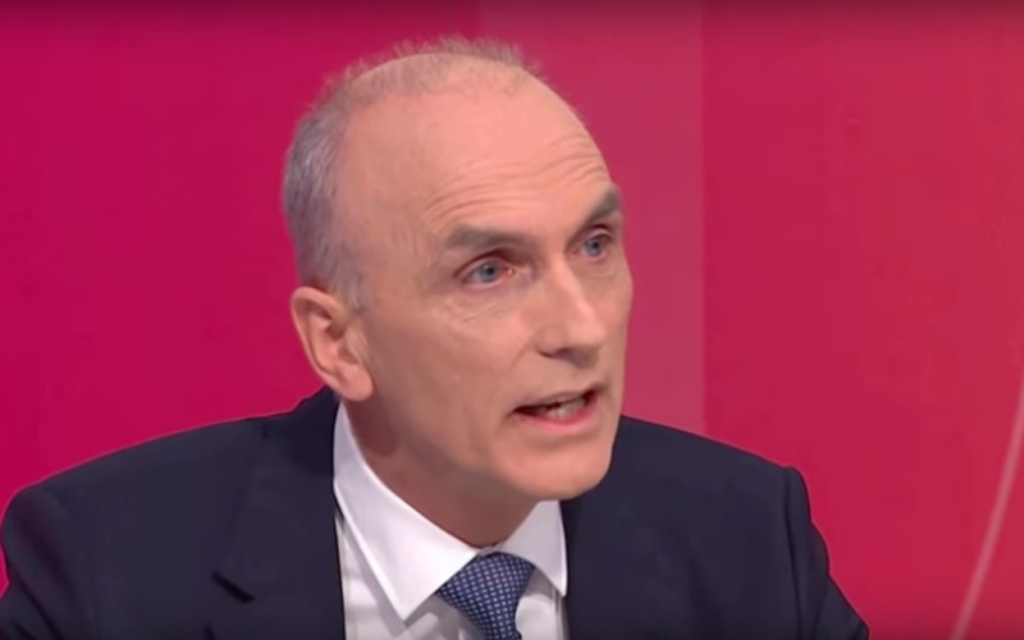 Like last year, the conference also witnessed appearances by a string of controversial individuals.

Tony Greenstein, who was kicked out of the party in February, told a fringe meeting organized by the pro-Corbyn Jewish Voice for Labour that “the purpose of the witch hunt is not to get rid of individuals. Its purpose is to topple Jeremy Corbyn.”

Miko Peled, a Israeli-American author and pro-Palestinian activist, who caused outrage at last year’s conference for telling a fringe meeting that people should be be free to ask, “Holocaust: yes or no,” also made an appearance in Liverpool, tweeting a picture of himself and Corbyn.

So, too, did Marc Wadsworth, who was expelled from the party earlier this year following a confrontation with Jewish Labour MP Ruth Smeeth at the 2016 launch of a report into anti-Semitism in the party.

Once again, too, delegates were flyered with grossly offensive and anti-Semitic leaflets.

And what of the handful of former moderates now serving on Corbyn’s frontbench? As ever, they seek to split the difference in a fight which, many assume, demands people take sides.

Emily Thornberry, the Shadow Foreign Secretary, for instance, used her conference address to condemn “sickening individuals on the fringes of our movement, who use our legitimate support for Palestine as a cloak and a cover for their despicable hatred of Jewish people, and their desire to see Israel destroyed.”

But just days earlier, Thornberry — who many believe has leadership ambitions of her own — was expressing her sympathy for the torrid time Corbyn has had over the summer. He was usually “very Zen” about personal criticism, she told the Evening Standard, and went on: “But calling him an anti-Semite, calling him a racist, that just went straight to the absolute core of him. It really distressed him.” 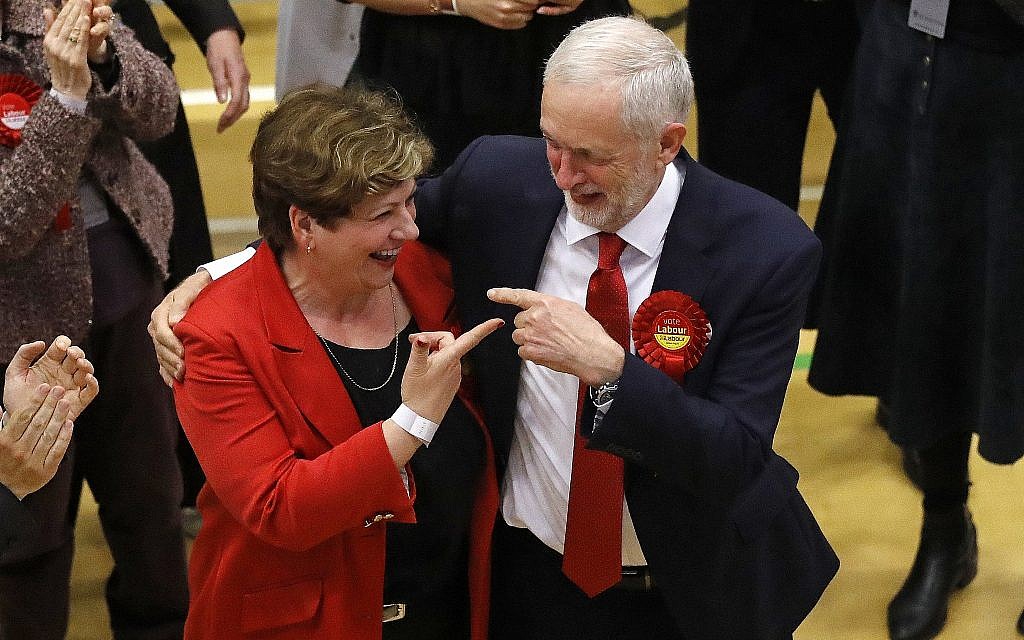 Similarly, Barry Gardiner, a one-time Blairite who now serves in the Shadow Cabinet and is known for his pugnacious media defenses of the Labour leader, both denounced the fact that Berger needs police protection and said that he had complained to the BBC over the manner in which it questioned Corbyn about anti-Semitism.

But perhaps the most telling moment of this week was not the fiery words of McCluskey or the timidity of fellow-traveling moderates, but an obscure vote made by local party delegates on the first day of conference.

In what is termed the “priority” ballot, they picked Palestine as one of the key topics they wished to see debated this week. It ranked alongside housing, education and the “Windrush” immigration scandal — and ahead of the National Health Service, care for the elderly, welfare and, most remarkably, Brexit.

The resulting debate on Tuesday saw chants of “Free Palestine” with the conference hall awash with Palestinian flags, which were handed out to delegates. In sharp contrast, those who wished to wave European Union flags were told by stewards that they could not do so.

The subsequent motion passed by the conference was predictably one-sided, laying the blame for violence at the Gaza border in recent months squarely at the door of Israel, pledging a halt to arms sales to the Jewish state if Labour comes to power, and calling for the “immediate unconditional end to the illegal blockade and closure of Gaza.” 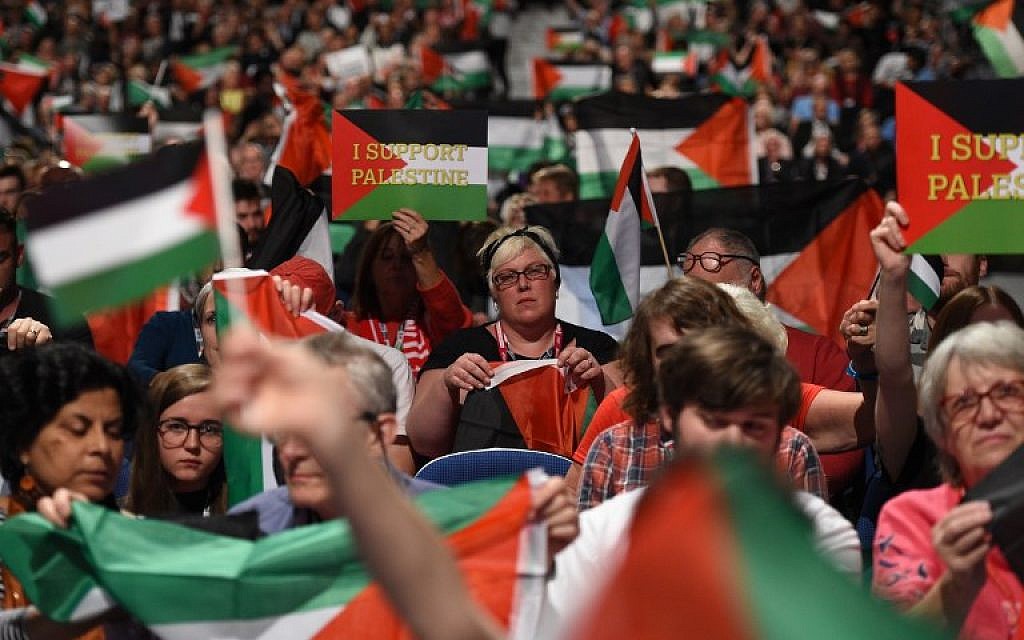 Delegates hold up Palestinian flags during a debate on the third day of the Labour party conference in Liverpool, north west England on September 25, 2018. (AFP PHOTO / Oli SCARFF)

Given the events of recent months, it was perhaps a somewhat insensitive display.

As Dan Hodges, a political commentator and former Labour party member, tweeted: “The official opposition of the United Kingdom is currently taunting one of Britain’s minority communities. That is the purpose of today’s debate on Palestine. To say to Britain’s Jews, ‘We are anti-Semitic and there’s nothing you can do about it.’”

For those members of the public paying any attention, the debate — coming on top of a summer in which the party appeared to talk of little else but Israel and anti-Semitism — probably did little more than demonstrate Labour’s peculiar obsession with the world’s only Jewish state.

Indeed, voters who share Labour’s once-proud internationalism may rightly wonder why there was no debate on the Syrian civil war, which has claimed the lives of an estimated 500,000 people over the past seven years, or the threat posed by Russia (a threat which reached the streets of Britain this year).

But the delegates’ vote underlines the fact that, for many of its members (and it is worth remembering that roughly 60 percent are estimated to have joined since Corbyn was elected in 2015), Palestine is, as Seumas Milne, Labour’s director of communications and strategy, once put it: “the great international cause of our time.” It is the issue that sets their pulses racing above almost all others.

In some regards, Labour is morphing from a political party into a protest movement — albeit one that is potentially going to constitute the next British government. In its approach to the Middle East conflict, it is simply the political wing of the Palestinian Solidarity Campaign, having outsourced its foreign policy thinking more generally to the anti-West, Israel-phobic Stop the War Coalition.

Those seeking a serious, decent alternative to Theresa May’s government — one that British Jews do not need to fear winning power and one that might even be able to play a useful and constructive role in the Middle East — won’t have seen that alternative this week.

Corbyn’s Labour, which may soon govern UK, is now an anti-Israel protest group