BDS Founder Confirms Movement Is About Ending the Jewish State 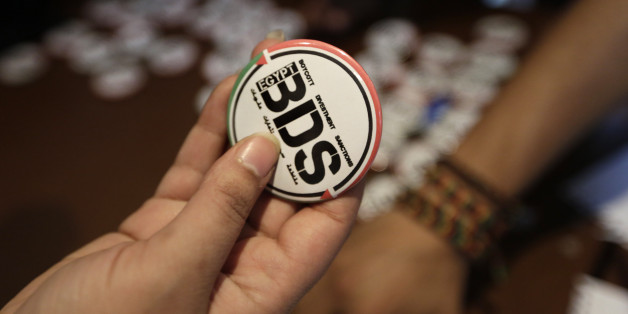 Supporters of the anti-Israel boycott, divestment, and sanctions (BDS) movement claim that BDS is about a two-state solution — and bettering the lives of the Palestinian people. At least that’s what leftist college students, progressive activist groups,and most media outlets want to believe.

But if you take the word of BDS founder Omar Barghouti, peaceful coexistence is the last thing that BDS is about.

Barghouti “piles falsehood upon falsehood to present Israel as relentlessly oppressing the Palestinians in violation of human decency, and to hold Israel exclusively responsible for the ills afflicting them,” wrote the New York Daily News in a 2013 editorial, noting Barghouti’s “skill” as a “propagandist.”

Born in Qatar, Barghouti moved to Israel in 1993, and holds Israeli permanent residence status. For someone who has been calling for the boycott of the Jewish state since 2005, he has gamed the system by obtaining a master’s degree in philosophy from Tel Aviv University, and was known to be pursuing a doctorate from the Israeli school as recently as 2015.

While the BDS movement has had limited tangible success — a few student government associations plus a handful of European communities calling for the boycott — Israel has thrived economically since the founding of the movement. In fact, a case can easily be made that the BDS movement has drawn attention to Israel as a true democracy that offers businesses a nurturing environment in which to create and flourish.

But while the tangible success of BDS has been limited, we are seeing younger people buy the propaganda. For a generation whose access to information is boundless, they don’t use it to search for the truth.

Any BDS supporter interested in the facts need only take four minutes of their life to know what they’ve signed up for. If they can put down the protest signs equating Zionism with Apartheid long enough to watch a video produced by the BDS watchdog group Canary Mission, Barghouti himself will clarify that the movement to which they’ve pledged allegiance is based on lies.

The idea of coexistence or a two-state solution is thrown out the window when Barghouti claims, “Most definitely we oppose a Jewish state in any part of Palestine,” adding that, “Palestinians and Arabs in general have never, and will never recognize Israel as a Jewish state.”

To hear him describe Zionism as a myth and still believe that the goal of the BDS movement is peaceful coexistence with Israel is a case study in denial.

While Barghouti is honest about his ultimate goal being the Jewish state’s demise, he resorts to blatant lies to garner support.

The BDS founder claims that “Zionists” refuse to debate him. Yet civil rights icon Alan Dershowitz has been calling on Barghouti to debate him for years. Barghouti refused to attend an Oxford Union debate about BDS, claiming that he was against “normalization” — which the BDS website defines as “events/projects that are designed to bring together Palestinians/Arabs and Israelis so they can work toward reconciliation.”

So much for dialogue.

While this lie may be cowardly, Barghouti also sells dangerous propaganda, such as dismissing antisemitism as “not a huge phenomenon” and claiming that Jews “are going back to European countries from which they were expelled.”

On the contrary, a 2017 survey by the Institute of Jewish Policy Research found that Jews are leaving Europe, particularly France, Belgium, and Italy. Jews are considering leaving Germany as well, due to the rise of antisemitic attacks, according to Felix Klein, Germany’s official in charge of fighting antisemitism.

Antisemitism in the United States aso increased by 57 percent over the previous year, according to a 2017 report by the Anti-Defamation League.  The same study revealed an 89 percent increase on college campuses where BDS is active.

Barghouti also engages in revisionist history, claiming that Arabs “have no history of pogroms, atrocities against Jews in the Arab East.” Canary Mission exposes this lie, listing all the pogroms by country and date.

No matter how hard Barghouti tries, he can’t change history or the facts. But this “skilled propagandist” is a superb salesman. Thus, there are students, leftists, and governments buying his toxic waste — and recycling it.

A version of this article was originally published in The Spectator.

BDS Founder Confirms Movement Is About Ending the Jewish State