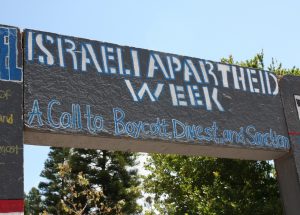 EXECUTIVE SUMMARY: In the campus war against Israel, the all too familiar refrain from student anti-Israel activists, many of whom form the loose coalition of groups and individuals spearheading the Boycott, Divestment, and Sanctions (BDS) campaign, is that their quarrel is only with Israel and its government’s policies, not with Jews themselves. But that specious defense continues to fall away, revealing base anti-Semitism. This represents a seismic shift. Jews are now being indicted not just for supporting Israel but for being Jewish.

At McGill University recently, three board members of the University’s Students’ Society were removed from their appointments after a vote at the Fall General Assembly due to their alleged “Jewish conflict of interest.” The ouster was led by a pro-BDS student group, Democratize McGill, which was campaigning against pro-Israel students in the wake of a September ruling by the Judicial Board that had rejected the BDS movement on the McGill campus once and for all. This was done on the grounds that the movement failed to uphold the university’s constitution by “violat[ing] the rights of [Israeli] students to represent themselves” and discriminating on the basis of national origin.

In retaliation, and to eliminate pro-Israel views on the board, Democratize McGill launched an effort to purge the board of BDS opponents. This effort was based on the cynical notion that such opponents harbored a clear conflict of interest that arose from their purported biases. Because the students in question were Jewish or pro-Israel (or both), they were labeled by Democratize McGill as incapable of making informed or fair decisions as student leaders.

In stating this premise, the pro-BDS students ignored their own obvious biases as well as the lack of any balance in their own views on the Israeli/Palestinian conflict. They nonetheless felt entirely comfortable suppressing pro-Israel voices and Jewish students on the board, asserting that they sought to remove these students because they “are all either fellows at the Canadian Jewish Political Affairs Committee (CJPAC), an organization whose explicit mandate is to promote pro-Israel discourse in Canadian politics, or primary organizers for the anti-BDS initiative at McGill.”

Those students were to be disqualified, in other words, for having views that differed from those of the student leaders who sought to purge them. The Jewish board member and two other non-Jewish, pro-Israel board members were subsequently voted off the board.

McGill has a history of seeking to suppress pro-Israel expression, not only in the student government but also in its press. An example is a 2016 controversy involving The McGill Daily, which made the astonishing editorial admission that it was the paper’s policy not to publish “pieces which promote a Zionist worldview, or any other ideology which we consider oppressive.”

“While we recognize that, for some, Zionism represents an important freedom project,” the editors wrote, “we also recognize that it functions as a settler-colonial ideology that perpetuates the displacement and the oppression of the Palestinian people.”

Leading up to this revealing editorial, a McGill student, Molly Harris, had filed a complaint with the Students’ Society of McGill University’s (SSMU) equity committee. In that complaint, Harris contended that, based on the paper’s obvious anti-Israel bias, and “a set of virulently anti-Semitic tweets from a McGill Daily writer,” a “culture of anti-Semitism” defined the Daily – a contention apparently confirmed by the fact that several of the paper’s editors were BDS supporters and none of the staffers was Jewish.

An attempted purging of a pro-Israel student from student government, similar to the inquisition that occurred at McGill, took place in February 2015 at UCLA, when several council members on the USAC Judicial Board, UCLA student government’s highest judicial body, grilled Rachel Beyda, then a second-year economics student, when she sought a seat on the board.

The focus on her candidacy was not her qualifications for the position (which no one seemed to doubt), but the fact that she was Jewish. At issue was the way her “affiliation with Jewish organizations at UCLA . . . might affect her ability to rule fairly on cases in which the Jewish community has a vested interest in the outcome, such as cases related to the Israeli-Palestinian conflict,” as the student newspaper described it.

“Ruling fairly,” of course, meant ruling in support of the increasingly virulent anti-Israel campaign on the UCLA campus. Solely on the grounds of her religion, she failed the political litmus test that so-called progressive students, enthralled with their pursuit of social justice, see as their default position – being pro-Palestinian and anti-Israel.

The same thinking inspired a similarly discriminatory proposal the previous May by two members of UCLA’s chapter of Students for Justice in Palestine (SJP), which attempted to bar Jewish candidates from filling council positions if they had taken trips to Israel subsidized by the Anti-Defamation League, American Jewish Committee, or other organizations. According to the activists, those organizations “have openly campaigned against divestment from corporations that profit from Israeli violations of Palestinian human rights.”

Of course, there was no mention in this debate of sponsored trips to send pro-Palestinian students to Israel or the territories on propaganda excursions designed to malign Israel and teach visitors an alternate, anti-Israel narrative. Once again, in addition to trying to stack the deck against the pro-Israel argument, this proposal took it as a given that anyone not committed to the Palestinian cause was by default not to be trusted, incapable of making unbiased decisions, and morally compromised.

A particularly odious attempt to rid a campus of Jewish and pro-Israel voices took place in 2015 when student council leaders at Durban University of Technology (DUT) in South Africa floated a proposal suggesting that Jewish students be purged entirely from the institution. As the student body’s secretary, Mqondisi Duma, put it, “We took the decision that Jewish students, especially those who do not support the Palestinian struggle, should deregister.” This is, one would think, a rather shocking sentiment from students who themselves benefited from a worldwide campaign in the 1970s and 1980s to end South Africa’s racist apartheid system.

The moral arrogance of the South African students’ proposal was breathtaking, and not only because of its grotesque version of the anti-Semitic practice of making all Jews responsible for the political actions of Israel. It revealed that the pro-Palestinian movement is so enthralled with the righteousness of its cause that anyone who harbors or expresses other views is considered a pariah, unworthy to have his or her ideas heard in the marketplace of ideas on campus.

Progressive students have decided, from within their own moral self-righteousness, that the Palestinian campaign for self-determination is such a sacred cause that anyone who questions it or expresses the Israeli point of view is a moral retrograde. To support Israel is to risk being deemed a racist, an imperialist, a tacit supporter of apartheid. And more than that: if you are Jewish, or even a non-Jewish student with no connection to Palestinian Arabs or Israelis who has not publicly proclaimed his or her allegiance to the Palestinian cause and denounced the Israeli one, he or she can be deemed morally unworthy of serving as a student leader or even, in the South African instance, of attending a particular university.

The student leaders who, in the context of the Israeli/Palestinian conflict, now try to suppress all thought of which they disapprove have sacrificed one of the core values for which the university exists. In their zeal to be inclusive, and to recognize the needs and aspirations of victim groups, they pretend to foster inquiry but have actually stifled it. The first victim in the dilution of academic free speech and debate has been the truth.

For over 26 years Cravatts was publisher of the Boston Classical Network, a firm which created playbills to enhance the marketing of the region's major performing arts organizations, including the American Repertory Theatre, Huntington Theatre Company, Celebrity Series of Boston, Handel & Haydn Society, and Boston Lyric Opera. He was the founding editor of Metrowest Magazine and Wellesley Weston Magazine, and associate publisher and editor in chief of Orlando's Best and the Greater Boston Restaurant & Wine Review. He was also the art director and travel editor of Palm Beach Illustrated, as well as the Boston dining correspondent for East/West Network, Inc., publishers of in-flight magazines for the nation's leading airlines.

From 1976-78, Dr. Cravatts was the first director of publications at the Kennedy School of Government at Harvard University at a time when the School was undergoing dramatic growth and in the midst of a significant capital campaign, and was the founding editor of the School's magazine and portfolio of marketing publications; he also later served in a similar capacity as the first director of public relations at Harvard's School of Public Health.

Dr. Cravatts has published over 350 articles, op-ed pieces, columns, and chapters in books on campus anti-Semitism, campus free speech, terrorism, Constitutional law, Middle East politics, real estate, and social policy, and is the author of the book, Genocidal Liberalism: The University's War Against Israel & Jews. He is also a frequent guest on radio programs and lectures nationally on the topic of higher education and the Middle East.

In addition to being an SPME board member and chair of its Greater Boston chapter, Cravatts is a board member of both The Journal for the Study of Antisemitism and the Investigative Taskforce on Campus Anti-Semitism, and an Academic Advisory Board member of the Louis D. Brandeis Center for Human Rights Under Law.