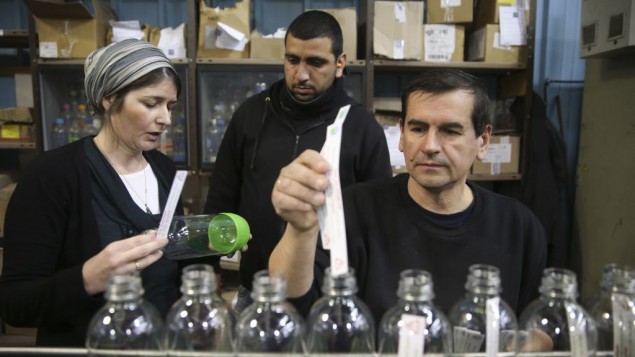 A Palestinian worker speaks with his Jewish employee at the SodaStream factory in the Mishor Adumim industrial park, February 2, 2014. (photo credit: Nati Shohat/Flash90)

A Britain-based Israeli-owned store was forced to shut down Monday, apparently as a result of continuous protests by supporters of boycott, divestment and sanctions against Israeli companies operating in the West Bank.

The EcoStream shop in Brighton, which sold recyclable plastic bottles for beverages produced by the Israeli-owned SodaStream corporation, was closed despite reporting positive revenue in the two years since it was opened. EcoStream’s bottles were produced in a factory in the Mishor Adumim industrial zone, near the Israeli West Bank settlement of Ma’ale Adumim.

A SodaStream spokeswoman confirmed that the store had been shut, but did not comment on the weekly BDS protests.

“Following a two-year test period, the company has decided to focus its business efforts on other channels,” she said, according to the Jewish Chronicle.

“The business in the UK is on a high growth pattern, with over 20 percent year-on-year growth and rolling out to new retail stores across the country,” continued the spokeswoman.

Sarah Colborne, director of the Palestine Solidarity Campaign, which organized the protests against EcoStream, attributed the store’s closure, however, as well as a recent decision by department store chain John Lewis to take SodaStream products off its shelves, to the pressure of the BDS movement.

“The news that SodaStream is closing its main UK store and that John Lewis is taking SodaStream products off its shelves is a major success for the Boycott, Divestment and Sanctions movement,” she said, according to Haaretz.

Earlier this year, Hollywood actress Scarlett Johansson sparked a vehement debate when she accepted the role of spokeswoman for SodaStream and was heavily criticized by supporters of BDS.

Johansson accused some of her critics of being motivated by anti-Semitism.

“There’s a lot of anti-Semitism out there,” Johansson said in an interview with Vanity Fair magazine, published in its May issue, which hit newsstands April 10.

“I’m not an expert on the history of this conflict, and I’ve never professed to be,” Johansson told the British newspaper the Telegraph in an interview published in March.

“But it is a company that I believe in, that I think has the ability to make a huge difference, environmentally. [CEO] Daniel Birnbaum has said many times that this factory is one he inherited, and that he doesn’t want to fire people — the majority of those people being Palestinian,” she said.

SodaStream maintains that the company’s operations in the West Bank contribute to Israeli-Palestinian coexistence and stress that the plant in Mishor Adumim employs hundreds of Palestinians.