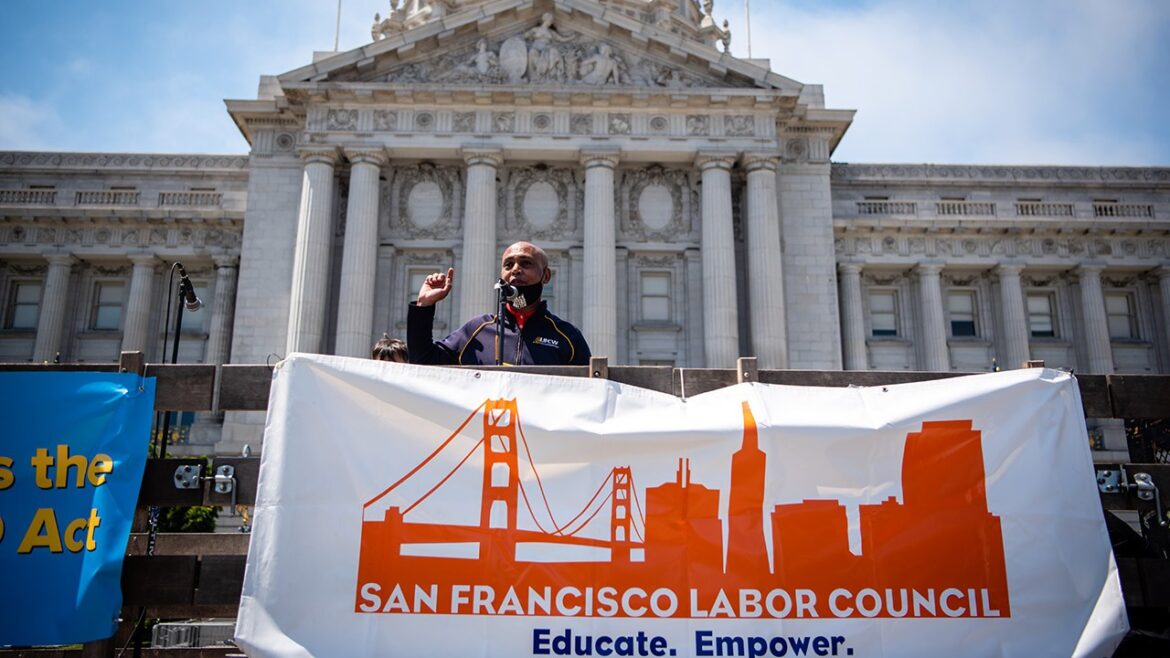 The quick rise in unions around the country endorsing boycotts against Israel could face a challenge in San Francisco.

A leader in the San Francisco Labor Council tasked with reviewing a proposed BDS resolution said he agrees with the national arm of the AFL-CIO: Backing the boycott, divestment and sanctions movement against Israel falls outside the local chapter’s purview.

In response, the resolution’s supporters said if it is blocked, they will appeal the decision.

In June, 19 members of the SFLC, a local AFL-CIO body with more than 100,000 workers, submitted “Resolution in Solidarity with Palestine” to the group’s delegate assembly. The resolution included an endorsement of the BDS movement and a call to end U.S. military aid to Israel. The SFLC’s executive committee formed a seven-person group tasked with reviewing the resolution and making recommendations.

As part of that review, Rudy Gonzalez, an SFLC executive committee member and co-chair of the resolution’s review group, spoke on Sept. 9 with Fernando Losada, the national AFL-CIO Western regional director.

After the meeting, Gonzalez told J. that endorsing BDS would put the labor council “in a foreign policy position” beyond its authority; it’s a matter, he explained, that is up to the national AFL-CIO group.

“That’s off the table,” Gonzalez said about BDS remaining part of the resolution.

In an interview with J., Losada reiterated the AFL-CIO’s position on foreign policy matters.

“Expressions of solidarity [are] always good,” Losada said. “But in terms of setting international policy, that is the purview of the national AFL-CIO through our organizational processes. There’s an existing policy in solidarity with working people in the Holy Land. It does not include BDS.”

For his part, while Gonzalez is open to a resolution strictly in solidarity with Palestinians, he would like the council to focus on matters closer to home, such as the country’s wealth gap, the effects of the pandemic and access to health care.

Gonzalez, the secretary treasurer for the San Francisco Building and Construction Trades Council, said if the resolution comes up for a vote and still includes the BDS endorsement, he expects it to be ruled “out of order.”

But supporters of the resolution, including signatory Frank Martin del Campo, S.F. chapter president for the Labor Council for Latin American Advancement, said they would challenge such a move.

“We respect the thoughts and proposed actions of the AFL-CIO and value their esteemed leadership,” del Campo wrote in an email to J. “However, if the Resolution is ruled out of order, we will be appealing the ruling to the highest body of our council, the delegates assembly. We have fought for the democratic rights of all consistently for the last 10 years.”

The SFLC has passed resolutions in the past regarding international matters, including in Colombia and Myanmar.

There’s an existing policy in solidarity with working people in the Holy Land. It does not include BDS.

When asked what sets BDS apart from issues addressed in other international resolutions, Gonzalez said it’s because there isn’t a unified position on the BDS movement.

“There’s a place for labor to step in and protect people and draw awareness to something,” he said. But there isn’t agreement on boycotts against Israel, Gonzalez said, adding that he knows both pro-BDS and anti-BDS labor leaders in the city.

“There isn’t unity around that question,” he said.

Susan Solomon, the other co-chair of the SFLC resolution review committee, who is also the former president of the S.F. Unified School District teachers’ union, United Educators of San Francisco, did not respond to a request for comment.

UESF’s delegate assembly passed a resolution in May that endorsed BDS, making history as the first K-12 teachers’ union ever to do so — and causing an uproar among some in the Jewish community. UESF’s executive board shortly thereafter passed a resolution condemning antisemitism, which now sits side-by-side with the BDS resolution.

The San Francisco Labor Council is part of a growing number of local unions across the United States that are either backing or considering support for boycotts against Israel.

But opposition to BDS among labor leaders at the national level remains strong.

In Los Angeles, after chapters of the teachers’ union advanced a BDS resolution in May, Randi Weingarten, president of the American Federation of Teachers, stated in a letter that her organization “has never supported BDS.”

But she also said she wouldn’t interfere with decisions made by local chapters.

“We believe strongly in dialogue, debate and the free ability to express a range of viewpoints,” she wrote. “The ‘federation’ in American Federation of Teachers has real meaning: Locals have broad autonomy, and the national union does not override locals over differences or questions of policy.”

A full vote on the boycotts by the L.A. teachers’ union is set for this month.

Richard Trumka, who led the AFL-CIO from 2009 until his death in August, began his tenure by denouncing boycotts against Israel.

In an October 2009 speech before the New York–headquartered Jewish Labor Committee, Trumka said the AFL-CIO was “proud to stand with the JLC to oppose boycotting Israel.” Jeff Schuhrke, a labor historian who has written in the past about labor’s support for Palestinians and BDS, said he doesn’t think Trumka’s absence will change the AFL-CIO’s orientation.

He wrote, “I don’t expect Trumka’s death to change the AFL-CIO’s long-standing positions on Israel, Palestine, or BDS.”