Anti-Israel flag just par for the course at Oberlin 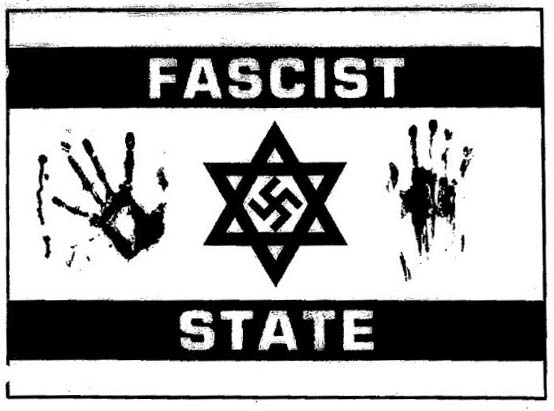 Yesterday we posted examples of the racist and other posters placed around the Oberlin campus last February as part of The Great Oberlin College Racism Hoax of 2013.  There are many more in the Oberlin police department document production we did not post.

On no campus in the United States or elsewhere would the racist posters using the “N” word and so on be acceptable public discourse (even if it is an interesting free speech legal issue).

But what about the anti-Israel poster?

Unfortunately, such discourse on campuses and elsewhere is par for the course in the anti-Israel movement.  The attempt to single out Israel alone for boycott, and the false equation of Israel with Apartheid, fascism and Nazism, is part of the dialogue and accepted.

Oberlin is one of only a handful of higher education campuses where the student government has endorsed the anti-Israel BDS movement and boycott.

Oberlin is one of only a handful of higher education campuses where the student government has endorsed the anti-Israel BDS movement and boycott.

In fact, Oberlin has one of the most active anti-Israel movements which spreads historically inaccurate falsehoods about the “occupation” and Israeli “Apartheid” policies:

I have to wonder, if only the anti-Israel posters were put up around Oberlin not accompanied by attacks on blacks, Muslims and gays, would anyone have noticed or cared?  Would the campus have erupted in protest?

Somehow I doubt it.

The specific flag used on the Oberlin poster is akin to a stock image in anti-Israel protests, this one in San Francisco: From Campus Reform, such images are particularly pervasive at U. California campuses: From the ADL website, the Nazi symbol on the Israeli flag is common at anti-Israel protests around the country (more at the link): And even in Canada: So while all the posters should be condemned, understand that the anti-Israeli Nazi symbolism is commonplace, part of the anti-Israel movement on campuses, and in many circles, acceptable.

Perhaps that is why the President of Oberlin’s head was photoshopped onto Hitler, and when told that the President was Jewish, the student perp laughed:

Anti-Israel flag just par for the course at Oberlin