To Save a Marriage

A review of We Stand Divided: The Rift Between American Jews and Israel 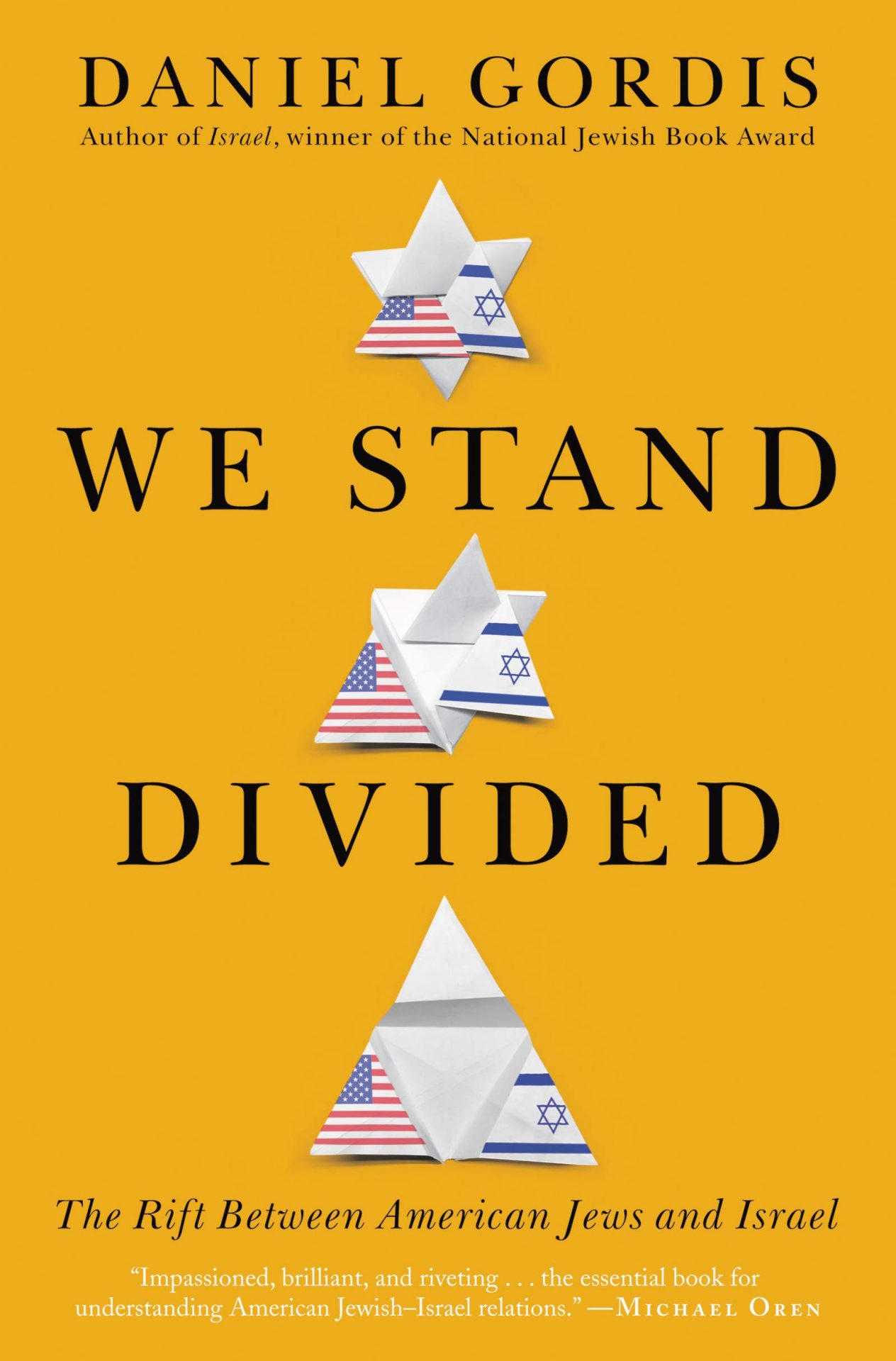 In a survey of American Jews conducted this year, only 62% agreed that “caring about Israel is a very important part of my being a Jew.” How seriously one should take this is hard to say. It’s a low number, the lowest since the American Jewish Committee initiated its survey more than thirty years ago. The last year we saw a percentage nearly this low was 1986, when it stood at 63%. On the other hand, 1986 was a blip.

Even if one suspects that American Jews aren’t as down on Israel as some commentators fear, it’s tempting to read a lot into that 62%. Most Jews are Democrats or lean that way. Nearly all Democrats disapprove of Donald Trump. But Israelis like him—via the Pew Research Center they gave Trump a whopping 69% approval rating last October. And Benjamin Netanyahu has hugged Trump hard. Moreover, there is a vocal and energetic part of the Democratic Party that judges the United States far too easy on Israel, and two supporters of the Boycott, Divestment, and Sanctions movement sit in Congress. In an America in which Israel threatens to become a partisan and polarizing issue, little wonder that the American Jewish Committee found what it found. Only 62%? That’s a flip of the bird to the Republican Party and to Likud, or, worse, a sign that anti-Israel activists, once marginal, are making headway among American Jews

One shouldn’t read that much into a single survey in a single year. But I offer the reading as an example of the kind of thinking Daniel Gordis discourages in his superb We Stand Divided. Gordis, Senior Vice President and Koret Distinguished Fellow at Shalem College, doesn’t deny that relatively recent Israeli policies and actions have tested ties between American Jews and Israel. But it’s a mistake to think that our “fraught relationship” is caused by the Israeli-Palestinian conflict, or Israel’s treatment of migrant workers, or the Israeli people’s willingness to countenance Netanyahu’s vicious rhetorical assaults on Arab citizens of Israel, or anything that “Israel does.” The “real reason” for the rift “has to do with what Israel is.” Tension, then, is not an unnatural state from which Israeli and American Jews will emerge the next time liberals govern in Israel. Rather, and in a way that transcends left and right, the American and Israeli “communities have fashioned very different visions of what Jewishness is and ought to be.”

In the manner of a marriage counselor, Gordis encourages American and Israeli Jews to dig underneath their usual, poisonous, quarrels. These quarrels would be serious no matter how well the parties understood each other. But they’re toxic because American and Israel Jews refuse to acknowledge how fundamentally different they are from each other. Even deep differences, marriage counselors know, need not lead to divorce, but they might lead there if they aren’t brought to the surface.

Most of Gordis’s book, then, pushes us to confront such differences. A look at America’s Declaration of Independence and Israel’s Declaration of Establishment reveals perhaps the most important one. The former, though it airs the grievances of a particular people, is founded on assertions about rights and equality that pertain in principle to every human being. The latter, though it promises “complete equality of social and political rights to all” of Israel’s inhabitants, is founded on the historical claims of a particular people, and dedicated to “re-establishing in Eretz-Israel the Jewish State.” That State won’t exclude non-Jews but it will “open the gates of the homeland wide,” especially, “to every Jew.” Jewish Americans, Gordis suggests, who resist on principled liberal grounds special considerations for America’s Christian majority, are ill at ease with the pervasive Jewishness of Israeli public life, even as they are deeply moved by it. Following other commentators, Gordis puts the difference starkly: Israel is an “ethnic democracy,” not a “genuine liberal democracy.” American Jews will feel defensive about some manifestations of this difference, like the use of Jewish national symbols in a nation with a large non-Jewish minority, and disturbed by others, like the wish, sometimes legally supported, of some Jews to keep non-Jews out of their communities. Israeli Jews, in turn, too comfortably ethnocentric, will read even legitimate American Jewish criticism as the witless preachings of a community that has left itself defenseless against assimilation.

If liberalism is the most fundamental issue dividing American and Israel Jews, the most personal concerns “the messiness of history.” I say personal because, as Gordis relates, some early Zionists were animated by disgust at the “weakness, passivity, and cowardice” of Diaspora Jews. Jewishness would be recast in its ancient homeland, and only then could Jews become actors in history, responsible for their own fates. From this standpoint, even Jewish American Zionists, like Louis Brandeis, who allowed that Zionism was critical for “inculcating self-respect” in the Diaspora, seemed soft for also allowing that an American Jew might support the Jewish homeland yet aver that “neither he nor his descendants [would] ever live there.” For European Zionists, the historian Walter Laqueur wrote, “Zionism was their whole life.” For American Zionists, it was “one of several preoccupations.”

The American Jew is therefore suspect to Israeli Jews and rendered more suspect, Gordis explains, by his anxiety about the use of Jewish power. Here is the messiness of history, since the use of power, for Israel as for other nations, sometimes entails unjustly harming others. About this, American Jews are so squeamish that they incline to idealize powerlessness. They—especially but not only “progressives and millennials”—are “so deeply troubled by Israel’s use of force, that they would give up the state to end the violence.”  If Israeli Jews are too quick to call American Jews weak—a suspicion of temporal power has roots, after all, Gordis reminds us, in the Bible—American Jews are too quick to call Israeli Jews butchers.

Gordis, a two-time National Jewish book award winner, relates all this masterfully. Though short, for maximum effect, We Stand Divided draws on a wide range of witnesses, from Pinsker to Portnoy, to explain the quarrels between American and Israeli Jews. Pleasingly, Gordis shares displeasing news: if American and Israeli Jews find themselves in a rocky marriage, the truest thing each can say to the other is: “it’s not anything you did. It’s who you are.” Yet Gordis thinks the marriage must and can be saved. Before I turn to that hopeful note, let me register a complaint or two, in the manner of recipients of marriage counseling.

Gordis, who was born and raised in the United States and made aliyah in his late thirties, is well-positioned to counsel. But at times in We Stand Divided, I suspect, American Jews will feel misunderstood. Let two examples suffice. Gordis, as already noted, asserts that “American Jews” are prepared to “give up the state to end violence.” But the only Jews we encounter in Gordis’s book who could be said to take this position today, even qualifiedly, are the members of IfNotNow, a non-Zionist organization that hardly speaks for mainstream American Jewry, and Daniel Levy, a co-founder of J-Street who is not an American Jew. I doubt many American Jews would give up the state of Israel to end violence.  Here, oddly, American Jew seems, to be synonymous with “borderline anti-Zionist.”

Second, in explaining why American Jews reject particularism, Gordis claims that they are uncomfortable with the very idea of nation-states. He draws on the political theorist, Mark Lilla, according to whom “post-national Europe” finds Israel’s pride in being a nation-state “profoundly embarrassing.” Gordis adds that “American Jews share that embarrassment,” but the United States is hardly post-national. Lilla himself suggests, in the very article Gordis cites, that Americans are closer to Israel than they are to Europeans in this regard. Here, American Jew seems, oddly, to be synonymous with “European.” At this point in the counseling session, the American Jew may just shout “you don’t get me!”

As for Israeli Jews, Gordis acknowledges that many classic Zionists saw “no contradiction between their commitment to Western values or democracy and liberalism and their belief in the importance of a Jewish state.” Their heirs might think Gordis concedes too much when he says that Israel is not and does not care to be a genuine liberal democracy.

Back to that hopeful note. Although Gordis thinks that neither Israeli Jews not American Jews should consider themselves safe enough to go it alone, he also wants to convince us that we are not only potentially safer but also much better for the deep differences his book reveals. He gives us a passage from Emma Lazarus’s “The New Year”:

One rolling homeward to its ancient source,

One rushing sunward with fresh will, new heart.

By each the truth is spread

It “is not healthy for a tiny country with the population of Los Angeles not to be enriched by a steady stream of cultural innovation and challenge,” much of which has and will continue to come from American universalism and pluralism. And the American Jewish community, the “least Jewishly literate community ever created by Jewish people,” has little that is distinctly Jewish, beyond the “homogenized Judaism” of Hebrew school, to offer its young. Israel points to a vital, dramatic, attractive, and distinctively Jewish way of life in which American Jews can become involved.

Gordis doesn’t say precisely how we make our way from anger over our differences to a quarrel among friends. But part of it—here’s the marriage counselor again—comes from commitment to the relationship. That kind of commitment is what leads one to temper criticism, even when justified, with support and understanding.  It is what prevents American Jews from concluding, absurdly, that Israeli Jews just hate peace, and Israeli Jews from concluding, as absurdly, that American Jews willingly and happily watch their children lose contact with their Jewishness. Yes, we stand divided. But there’s also Herzl’s line, which Gordis quotes and which pervades his book.

“We are a people—one people.”

To Save a Marriage

A review of We Stand Divided: The Rift Between American Jews and Israel