Special report: ‘Anti-Semitism of contemporary left is a problem for democracy

Philip Spencer, Emeritus Professor in Holocaust Studies, reviews a new academic book about the anti-Semitism of the ‘anti-racist’ contemporary left 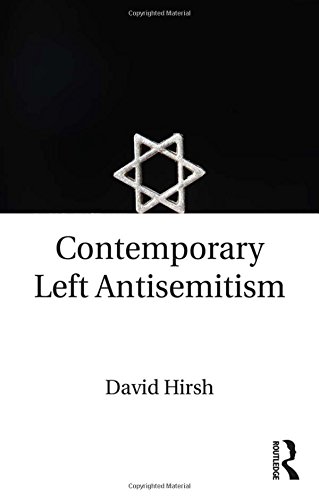 The phenomenon of left wing anti-Semitism is not, sadly, new. Some prominent early socialists were openly anti-Semitic. Some Marxists, too, argued (although not Karl Marx himself) that anti-Semitism had a “rational kernel” and could be used to win support for the cause. Before the Holocaust, the communist movement flirted with anti-Semitism on more than one occasion.

Even after the Holocaust, the Soviet Union launched its own murderous anti-Semitic campaign, accusing Jews of being both wicked nationalists (Zionists) and disloyal cosmopolitans. Contemporary Left Antisemitism, David Hirsh’s brilliant and compelling new study, should not, then, come as too much of a surprise, although (as always with anti-Semitism) it does not simply repeat the past. It draws on a toxic pool of existing “ideas” but reworks them, adding further elements within the new framework of an anti-Zionism that sees Israel (where, after the Holocaust, large numbers of Jews actually now live) as uniquely evil.

But what is also new is that this form of anti-Semitism has, as Hirsh – a senior lecturer in sociology at Goldsmiths University – argues, entered the political mainstream.

In Britain, the Labour Party is led by Jeremy Corbyn, a formerly marginal figure, who has long associated with virulent anti-Semites from whom he has previously shown little inclination to distance himself.

Meanwhile, the academic wing of the trade union movement has adopted a policy of boycotting only Israel, which has led many Jewish members to feel so intimidated they had to leave.

The campaign against that boycott was largely led by Hirsh himself, at no little personal cost, as he relates in some moving reflections on how and why he embarked on and conducted what is, in the circumstances, a remarkably thoughtful study.

What is particularly impressive is the way Hirsh takes seriously the protestations of those who espouse contemporary anti-Semitic tropes. Unable or unwilling (not quite the same thing, of course) to understand that, as he explains, anti-Semitism is deeply embedded in structures of power and thinking (even as it takes different forms over time), they claim that they cannot possibly be anti-Semites because they are on the left, because they are committed anti-racists.

They “know” that anti-Semitism, after the Holocaust, is no longer a problem. Instead, Jews have purportedly become “white” themselves (which will be news to many Jews!) and are supposedly now an integral part of the Western imperialist power structure for which Israel is either a local agent or its directing force.

If not before, then now at last Jews can legitimately be blamed for provoking anti-Semitism themselves. Contemporary left anti-Semites can then claim that those who raise the question of anti-Semitism on the left can only be acting in bad faith, with malign intent, using it as a weapon to discredit their beloved leader and, even worse, to shield Israel from criticism.

As he explains here, Hirsh first identified and provided a compelling critique of this self-deceiving strategy when it was used by Ken Livingstone, then Mayor of London, wittily terming it the “Livingstone formulation”.

But he shows that it is now no longer a local phenomenon, as it has been embraced with disturbing enthusiasm by anti-Zionist activists globally. However, as Hirsh also argues, this development is connected with a broader and potentially still more alarming development and what he identifies as a disastrous ossification of left-wing thinking.

This has to do with the construction of what he calls the “community of the good” on the left, from which all who question this now axiomatic stance, who seek reasoned debate, have to be cast out.

In some of the most thought-provoking sections of this book, Hirsh draws on the philosopher Hannah Arendt to suggest that this new form of anti-Semitism is integral to the re-emergence of a totalitarian element on the left (as much as on the right), intolerant of disagreement, demanding unconditional loyalty and infatuated with a leader upon whom it can project all its fantasies.

As Arendt showed, anti-Semitism played a central role in the development of totalitarianism before and may now be doing so again.

Philip Spencer is Emeritus Professor in Holocaust and Genocide Studies at Kingston University.

Special report: ‘Anti-Semitism of contemporary left is a problem for democracy

Philip Spencer, Emeritus Professor in Holocaust Studies, reviews a new academic book about the anti-Semitism of the ‘anti-racist’ contemporary left