Review of Jews Against Themselves 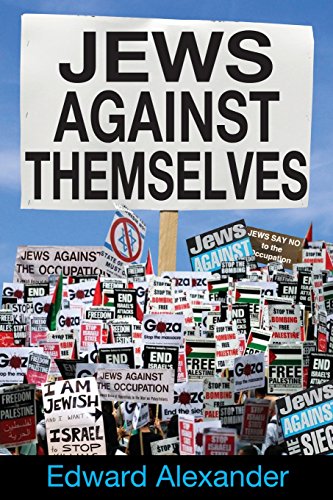 Jews Against Themselves. Edward Alexander. Published by Transaction Publishers, 2015. $24.95 pp.178

Among the lamentably small coterie of Jewish intellectuals and academics who defend Israel against the anti-Zionist tirades of its legions of liberal and leftist Jewish critics Edward Alexander ranks high. His new collection of essays, Jews Against Themselves (Transaction Publishers), displays sweeping intellectual range and abiding Jewish passion as he hones in on the targets of his analytical scrutiny. A proud and committed Jew who spent years teaching in Israel, Alexander writes with insight, precision and, at time, scathing scorn.

Amid the rising waves of anti-Semitism that course through Europe and surge in the Middle East, Alexander focuses on “the new forms taken by Jewish apostasy in an age when Jewish existence is threatened more starkly and immediately than at any time since the Nazi war against the Jews.” Comprising those who hate Israel, defame other Jews for supporting the Jewish state, and “Israelis against themselves,” they join the roster of Jews, stretching back into the Middle Ages, who have “defamed, abandoned, and harmed their own people.” He exposes and eviscerates Jewish self-hatred, the liberal betrayal of Zionism, the “moral failure of American Jewish intellectuals,” and – as only an academic could – the rampant anti-Semitism that infests American universities and how it came to lodge there.

Alexander’s intellectual weapons are formidable. A literary scholar, he weaves Matthew Arnold, George Eliot and Franz Kafka into his narrative. A knowledgeable student of history, he integrates Benjamin Disraeli, Karl Marx and George Orwell into his analysis. He is as familiar with the Israeli apologetics of Amos Oz and David Grossman as he is with the tortured American Jewish gyrations of Hannah Arendt, Michael Lerner, and anguished Jews at The New York Times. His distinctive voice is audible and powerful. He is understandably infuriated that “self-hatred, like other afflictions of the Jews in exile, has taken up residence in the country of the Jews itself.” But only Alexander would inject a sardonic reference to “the first elegist to crow over the demise of Zion”: “a fellow named Merneptah, a ruler of Egypt who announced that ‘Israel is desolated; its seed is no more.’ That was in the year 1215 BCE.”

In an essay entitled “Why Jews Must Behave Better than Everybody Else,” he explores “the false moral symmetry and the double standard” that are routinely applied to Israel but “to no other nations, least of all the Arab states.” That palpable double standard, which Thomas Friedman once preposterously labeled a “unique double dimension,” was never more evident than during the Gaza war last year when Israel was routinely pilloried for its temerity in responding to waves of Hamas rockets and underground tunnel attacks.

Alexander is understandably riled by “The Moral Failure of American Jewish Intellectuals.” From Hannah Arendt’s indictment (Eichmann in Jerusalem) of European Jews for collaborating in their own annihilation to the current exemplars of “Zionists against Israel” (including J Street and Peter Beinart), he forges a devastating link between “Roosevelt’s abandonment of the Jews” and “Obama’s icy indifference to the plight of Israelis.” And that was written before Obama’s recent capitulation to Iran.

In “Israelis Against Themselves” Alexander explores the wellspring of self-loathing among Israeli intellectuals over “the imminent demise of Israel’s ‘soul.’” With careful scrutiny and withering scorn he explores the fulminations of Amos Oz, David Grossman and A.B. Yehoshua, among others, who have relentlessly and publicly deplored their country’s perceived moral transgressions. Alexander understands that the Israeli “occupation” (of the biblical homeland of the Jewish people, no less) “did not cause Arab hatred and violence; it was Arab hatred and aggression [from 1948 to 1967] that led to occupation.”

For any responsible Jewish academic, the call for boycotts, divestment and sanctions against Israel, which began in England more than a decade ago, is more than a violation of academic freedom. “The real issue,” Alexander writes of this persistent despicable effort, is “an anti-Semitic campaign to transform the pariah people into the pariah state.” The “flagrant violation of conscience” displayed by its professorial enthusiasts reminds him of “Hitler’s professors,” who recommended the expulsion of Jews from German universities. The BDSers, who denounce Israel’s “politics of occupation and apartheid,” amply deserve Alexander’s withering scorn.

Jews Against Themselves includes articles originally published in The Algemeiner, Commentary, Jewish Press,and The Weekly Standard (among other journals). It reveals the rigorous scrutiny and illuminating insights of a proud Jewish intellectual who is passionately committed to the Jewish state that exemplifies the miracle of “This Year in Jerusalem.” Jews who perversely seek to bolster their Jewish credentials by defaming Israel should take notice: Edward Alexander has thrown down the gauntlet of his eviscerating critique of their venomous and delusional Jewish self-loathing.

Jerold S. Auerbach is a frequent contributor to The Algemeiner

Review of Jews Against Themselves