Review of Jewish communities of Iran: Entries on Judeo-Persian Communities Published by the Encyclopedia Iranica 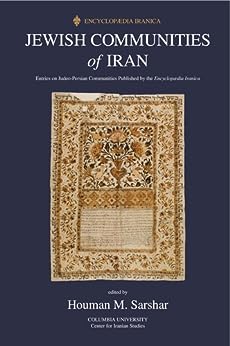 Among the small community of scholars that deal with the history of Iranian Jews, Houman Sarshar has a well known and respected name. In addition to his significant contribution to the Center for Iranian Jewish Oral History (CIJOH), Sarshar also served as the English co-editor of three (of four) volumes of the History of Contemporary Iranian Jews that appeared between 1997 and 2000. Several years later, under the auspices of CIJOH, Houman Sarshar edited Esther’s Children, another important contribution to the history of Iranian Jews.

Jewish communities of Iran, Sarshar’s new editorial endeavor is comprised of all the entries published in the Encyclopedia Iranica about the Jewish communities of the Persian speaking countries.  In this volume the entries, written by leading scholars in the field, have been divided into ten sections which describe various historical aspects of these communities. These sub-sections include history, Jewish communities, Jewish monuments in Iran, Judeo-Persian languages and literature, institutions, the Bible and the Talmud, Jewish interaction with other religions, and biographies. In addition, the volume contains ninety pages of valuable bibliography.

In his introduction, Sarshar points to the mid-1990s as a turning point in the historiography of Judeo-Persian studies and writes that until then “the overwhelming majority of published works in this field had focused on the lives of Iranian Jews in premodern times”. However, in the last fifteen years a new generation of scholars expanded the scope of the field to include the history of Jews in modern Iran.  Filling this “long outstanding lacuna,” the editor chose the subject matter for this publication.

Undoubtedly, this new volume represents an important contribution, and its publication will be appreciated by students and scholars who work in the field of  Judeo-Persian studies. Not only does it cover the whole scope of research in the field, but more importantly the editor devoted painstaking effort to present the most comprehensive bibliography published to date in this field.

The publication of Encyclopedia Iranica provides entries that cover the Jewish communities in the Persian speaking countries,  This work is important for another essential reason: written by prominent scholars of the Judeo-Persian studies and touching upon various historical fields and methods, it can be viewed as an effort to narrate the long history of Jews on the Iranian plateau and trace its unique development.

The editor’s general introduction which opens the history section of the volume well demonstrates the value of this narrative. Turning the spotlight on the history of Jewish communities throughout this broad area, Sarshar presents their long history with its major “turning points”.  Cyrus II and his conquest of Babylon in 539 BCE marks the starting point. Due to “all available evidence”, writes Sarshar, under Achaemenid rule, “Jews lived freely and prosperously”.   The arrival of Islam to the Iranian plateau brought about a change in the status of Jews when, following the pact of Omar, “all non-Muslims acquired … a second class citizenship”. The third turning point took place with the rise of Safavid dynasty that ended the era in which “the Jews of Iran lived in relative symbiosis with their Muslim compatriots”.  As it emerges from Sarshar’s general introduction, the second half of the nineteenth century saw the beginning of a gradual process of improvement in the quality of life of the Jewish communities in Iran. This process began as a result of increasing pressure from British and French Jewry, the arrival of the Alliance Israelite Universelle (AIU) French Schools, and the Constitutional Revolution in Iran.  The rise of Reza Shah marked the next phase in the steady process by which “the condition of Iranian Jews continued to improve”, and the rise of Mohammad-Reza Shah brought the process to its peak when “an entire generation of French-educated AIU graduates were ready to join the country’s full throttle westernization and industrialization campaign, and Iranian Jews found their way into virtually every sector of the country’s new or burgeoning intellectual, artistic, financial and commercial arenas.” The execution in May 1979 of Habib Elghanayan, a prominent figure in the Jewish community in Iran, by “the revolutionary court of the Islamic Republic of Iran” marks the end of Sarshar’s narrative. This event, writes Sarshar, “became a factor in further precipitating the emigration of Iran’s Jewish community”.

Important as this synthesis may be, one should bear in mind that the strength of this volume is to be found in its value as a reference work. To understand fully the processes and the changes that shaped the history of the Jewish communities in the Persian speaking countries, one should analyze them in the context of the historical conditions, including their specific time and place. Nevertheless, for all those who have interest in Judeo-Persian studies this volume is invaluable for planning future research.

In Jewish communities of Iran there is one other issue that should be mentioned and that is the use of the word Iran. In his introductory comment, Sarshar writes that a “noticeable change between the original Encyclopedia entries and their republication” in the volume concerns the use of the word Iran and, by extension, the adjective Iranian.  Sarshar Justifies this editorial preference on the grounds that “the country [is] historically known to Persian speakers by its native name of Iran” and therefore, “for the sake of consistency within the volume”, the word Iran and Iranian has been used instead of Persia and Persian, respectively. However, it seems that for the sake of clarity it is necessary to provide some explanation with regard to the changes to the borders and geography – that is, the physical contours of this political unit that historically is known as Iran.

Despite these quibbles, Jewish communities of Iran is an invaluable reference book that should be on the bookshelf of every student and scholar of Judeo-Persian studies.

Review of Jewish communities of Iran: Entries on Judeo-Persian Communities Published by the Encyclopedia Iranica