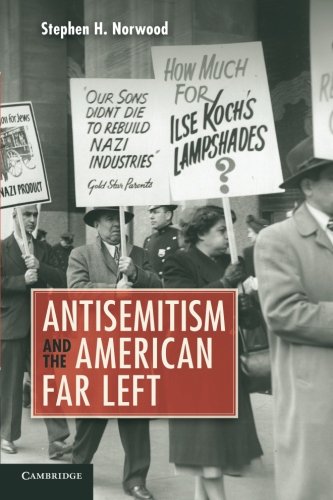 If you’ve ever wondered why “do-gooder” is a pejorative label, Stephen Norwood’s  book on “Antisemitism and the American Far Left’ will enlighten you. Rarely has there been a group of Americans so prone to mistake feeling good about what they are doing for actually doing  good as “far leftists.” They comprise Stalinists, Trotskyists, Old Leftists, New Leftists, loyal readers of The Daily Worker, New International, PM, Labor Action, The Nation, Ramparts, Tikkun; members of  the CP, SP, SWP, SDS, SNCC, and  indeed the whole alphabet soup cooked up by the dissidence of dissent.    That is why, over seventy years after Soviet communism has become synonymous with expropriation, show trials, organized famines, gulags, secret police, ethnic cleansing, Jew-hatred, and mass murder on a scale surpassing  that of Nazism, its former devotees—who has not encountered them?—take pride in their communist past. (If you’ve not had the pleasure of meeting  these friends of the human species and their liberal admirers, you can find them celebrated in both the Streisand-Redford film “The Way We Were” (1973), and in the 1981 documentary about John Reed called “Reds.” Both films express the liberals’ view that their own misfortunes  under Senator Joseph McCarthy were far worse than those visited upon his victims by Josef Stalin. Since Norwood’s book deals specifically with the left’s relationship to antisemitism, let us remember that  Stalin, in 1952,  executed 26 of the USSR’s leading  Jewish writers; the worst that an American-Jewish writer suffered because of  McCarthy was being “blacklisted” in Hollywood (and not because he wrote screenplays in Yiddish).

Norwood begins his book with an account of the American far left’s indebtedness to  Karl Marx (Jew by birth, Lutheran by religion) and other European antisemites for their raw hatred of  Jews (“the filthiest of all races,” was Marx’s delicate sobriquet  for Polish Jews, the biological and cultural center of European Jewry) and  of Judaism (“money is the jealous god of Israel, in face of which no other god may exist”).  Such European crudities usually had to be refined for American consumption, but perhaps there was something  genuine in the American socialists’ sense that the tenth commandment  (“you shall not covet …anything that is your neighbor’s”)  and the precept that “the poor shall always be with us” put Judaism permanently at odds with socialist policies of world betterment through confiscation and redistribution of wealth.

The foundation stone of Norwood’s narrative  is his lengthy discussion of  “World War II: The Limits of American Far Left concern for European Jewry.” Prior to summer 1939 American communists had by and large been supportive of the Soviet Union (where, they believed, humanity was being reborn in collectivist test-tubes) and hostile to a Hitlerite Germany  whose core principle was Jew-hatred. But the signing of the Molotov-von Ribbentrop Non-Aggression Pact between the two countries in August 1939 caused American communists to obfuscate or deny the “problem” of  Germany’s war against the Jews of Europe. The Pact allowed Germany to invade Poland on September 1 and eventually to destroy over 92 %  of its Jewish population.  But   American Communists ridiculed Jewish organizations (from the American Jewish Congress to the Jewish garment workers)  that protested the Germans’ genocidal campaign. The CP, in obeisance to the Pact,  opposed American participation  in a war against Germany, and—for good measure—labelled FDR a “fascist” at least as dangerous as Hitler. Its tone changed, of course, when Hitler ended the Pact by invading the Soviet Union on June 22, 1941.

Although the Trotskyists are often supposed  to have staked out a more honorable position on World War II than their Stalinist rivals in the Marxist family, Norwood shows that their position did not differ appreciably from that of the CP during the period of Molotov-Ribbentrop. Irving Howe, long an ardent Trotskyist and anti-Communist (who for years attacked American liberals like F. O. Matthiessen for being soft on the USSR)  consistently (even during his years in the U. S. army) opposed  American entry into World War II  on the side of the Allies. From his perch as Managing Editor of Labor Action, the weekly paper of the Workers Party, Howe insisted that the real “war aims” of the Allies were no better than those of the Axis, i.e., imperialism and support of dictatorships. His hero Trotsky, as if to demonstrate  just how much world affairs are ruled by sheer stupidity, not only outdid  the Stalinists in minimizing German antisemitism –“only worldwide social revolution,” he insisted, could save European Jewry”– but believed that the working classes of all European nations, including the German ones busily slaughtering Jews, would band together to overthrow the Axis governments.  Holocaust historian  Lucy Dawidowicz  asserted, in 1983, that “Hardly any group or party along the Marxist spectrum…ever gave a passing thought to the fate of the European Jews.”

Later sections of Norwood’s chronicle suggest that perhaps some Marxists gave some thought to the European Jews. He devotes much of Chapter 4, for example, to the Communist Party’s “pioneering role in promoting secular Jewish studies in the decade following World War II.” On a much higher level than the CP, a penitent Irving Howe (born Horenstein) and Eliezer Greenberg  published in 1954 (two years after the Russian Yiddish writers were murdered in the cellars of Moscow’s Lubyanka prison) the magnificent act of critical salvage and recovery entitled A Treasury of Yiddish Stories; and they dedicated it “To the Six Million.” But these efforts  were of a mortuary sort: one does not perform an autopsy except on a corpse.  When the time came to defend the living state of Israel, one of the most remarkable assertions of the will to live ever made by a martyred people, the leftists failed again. True, there was a brief period of Communist support  for partition of Palestine and the Jewish War of Independence in 1947-48. But when the Soviet Union turned against Israel, so did its obedient American leftist acolytes; and they have remained hostile to this day, obsessively reworking the old question “Do Jews have the right to live?” to read “Does Israel have the right to exist?” In his gloomy conclusion to this prodigious work of scholarship, Norwood observes that “the far left’s relentless propagandizing against Israel and Zionism, replete with classically antisemitic concepts and images, has outlived the movement that fashioned it.  American  colleges and universities are  ensuring the transmission of antisemitism to the next generation.”

If there is a hopeful element in the story of far left Americans and their relation to antisemitism, it lies in the substantial number of “unconversions”—especially in its large Jewish branch—from leftist orthodoxy on the Jewish Question.  Paul Novick, Albert Glotzer, David Horowitz,  Ronald Radosh, and  Sol Stern  took  up arms, at times quite skillfully, in defense of the beleaguered Jewish state they had been taught to hate.   Stern, in a 2003 essay in City Journal, recalled how in 1971 Ramparts, “the flagship publication of the New Left,” permitted him to “deviate from the party line on Israel” because he was a reliable left-wing radical  “on virtually every issue.” But it was the “last time that anything sympathetic to the Jewish state appeared in Ramparts or in any other New Left journal.”

Edward Alexander is Prof. Emeritus in the Department of English at the University of Washington, among his most recent books are The State of the Jews: A Critical Appraisal (Transaction, 2012) and Jews against Themselves (Transaction, 2015)


Read all stories by Edward Alexander