Review of A Legacy of Catholic-Jewish Dialogue: The Joseph Cardinal Bernardin Lectures 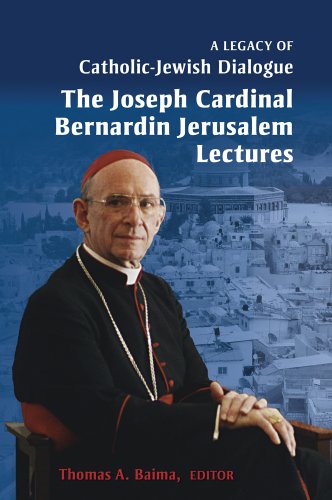 Except for its preface and afterword, this book consists of the texts of lectures in a ten-year series initiated by the Roman Catholic Archbishop of Chicago, Joseph Cardinal Bernardin (1928-1996, Archbishop of Chicago 1982-1996). In 1995, after years of joint projects between Catholic and Jewish leaders in Chicago, and two years after Vatican recognition of Israel, Cardinal Bernardin traveled to Israel and the Palestinian territories with a delegation of Catholics and Jews from the Chicago area. During this visit, Cardinal Bernardin delivered an address in the Senate Hall of the Hebrew University of Jerusalem on the subject of Christian anti-Semitism (known as “the Jerusalem Lecture”). After the trip, several of the participants (both Jewish and Catholic) met to debrief on the project and hatched the idea of a ten-year lecture series by Catholic and Jewish scholars as a follow up to the Cardinal’s Jerusalem Lecture. The proposal received enthusiastic support as well as funding from Cardinal Bernardin and the Chicago Archdiocese. The result was a series of ten lectures by five Catholic and five Jewish scholars, from 1996 to 2005, focusing on various aspects of Christian-Jewish relations through the centuries.

The Jewish lecturers are rabbi and philosopher Emil Fackenheim (“Jewish-Christian Relations after the Holocaust: Toward Post-Holocaust Theological Thought”); rabbi and theologian David Hartman (“The Theological Significance of Israel”); archaeologist and historian Richard A. Freund (“Bethsaida: Home of the Apostles and the Rabbis”); historian Robert Chazan (“Medieval Christians and Jews: Divergences and Convergences”); and rabbi and theologian Arthur Hertzberg (“Christian-Jewish Relations in the Enlightenment Period”).

The chief value of the lectures lies in providing a general sense (though not an exhaustive survey) of Catholic-Jewish relations, especially in the United States, in the late twentieth and early twenty-first centuries. It is striking, for example, to see a Cardinal and Archbishop of the Roman Catholic Church stating bluntly that “anti-Semitism has deep roots in Christian history, which go back to the earliest days of the Church” (p. 3). Cardinal Bernardin is willing to follow the Catholic biblical scholar Father Raymond Brown in tracing these roots right back to the canonical gospels themselves, above all the Gospel of John (pp. 10-11). Cardinal Bernardin draws the remarkable conclusion, unthinkable for a pre-Vatican II prelate, that St. John’s teaching about the Jews “can no longer be taught as authentic doctrine or used as catechesis by contemporary Christianity” (p. 11). Following the teachings of Vatican II and Pope John Paul II, Cardinal Bernardin insists that “the Jews remain a covenanted people, revered by God” (p. 11). These comments set the stage for the contributions of the Catholic lecturers in the series. Thus, Professor Anthony Saldarini of Boston College (going a step or two beyond the Cardinal himself) argues that Christianity will not overcome its anti-Semitism until Christians “correct the underlying theology which replaces Israel with the Church and thus denies the integrity and legitimacy of the Jewish people as the people of God” (p. 77). Robert Louis Wilken, a top scholar of early Christianity, frankly discusses the anti-Jewish rhetoric and theology of the fathers of the Church, such as St. John Chrysostom and Origen, yet he also finds enough nuance and complexity in early Christian thought to contend that “Christianity’s relation to the Jewish people cannot be reduced to abuse or hatred.”  After all, “Christianity is inescapably bound to the Jewish bible and to Jewish history,” so that “Christians are capable of understanding the Jews as the Jews understand themselves.” The upshot: “Christians are able to love the Jew as Jew, not only to hate” (p. 125) – even if they have so often failed abysmally to do this.

As one might expect, the lecturers go to great lengths to be courteous and respectful, Jews to Catholics and Catholics to Jews. At the same time, however, they feel comfortable enough to say some challenging things to each other – itself a sign of a healthy and mature relationship. Emil Fackenheim suggests that “Christian anti-Judaism will never end until Christians relate positively to Jews, not despite their non-acceptance of Christ, but because of it” (p. 37). Francis Cardinal George, for his part, asks “that the Jewish community relate positively to Christians, not despite their acceptance of Christ, but because of it” (p. 202). Rabbi Arthur Hertzberg reminds Catholics of the uncomfortable fact that Catholics and Jews were (mostly) on opposite sides in responding to the Enlightenment, with Jews largely embracing it and Catholics stubbornly resisting it well into the twentieth century, a resistance all-too-clearly illustrated by the reactionary policies of Pope Pius IX (pp. 172-3). Not until the 1960s would the Roman Catholic Church unequivocally affirm key Enlightenment values like the separation of Church and state, democracy, and religious freedom — a development driven in no small degree by American Catholics, shaped as they were by the Enlightenment values of the U.S. constitution. Rabbi Hertzberg also gently suggests that Cardinal Bernardin contradicts himself in his Jerusalem lecture by seemingly affirming and denying the Christian roots of Nazi Jew-hatred (pp. 179-80).

Both Catholics and Jews have good reason to read these lectures, for a reason articulated by Cardinal Cassidy in his lecture: “Not all Catholics have absorbed the teachings of the Second Vatican Council: not all Jews are aware of the changes that have taken place in Catholic thinking and practice over the past 30 years” (p. 42). These lectures are a perfect antidote for such ignorance in both communities.

Review of A Legacy of Catholic-Jewish Dialogue: The Joseph Cardinal Bernardin Lectures