Review of Making David into Goliath: How the World Turned Against Israel 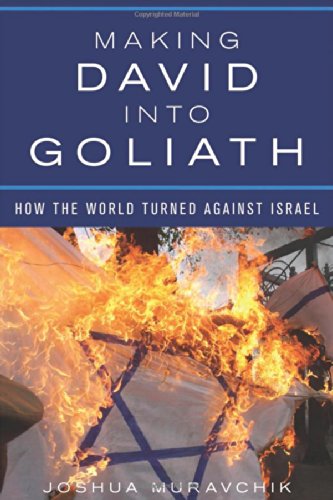 Joshua Muravchik has written an insightful and well-researched book on the important question of how and why Israel has gone from being an admired underdog to a despised pariah among the nations. Before the Six-Day War of 1967, it was clear to all that Israel was a David surrounded by the vastly larger Goliath of the Arab world. After 1967, the “Arab-Israeli conflict” gradually gave way in the eyes of the world to the “Israeli-Palestinian conflict.” As Israel became more economically and militarily powerful, the comparatively weak and scattered Palestinians came to be seen as the David to Israel’s Goliath.

A key step in this process was taken by the Palestinians themselves, most of whom realized the political folly of sticking with the reactionary rhetoric of Hajj Amin al-Husseini, the Nazi collaborator and unabashed Jew-hater who had founded and led the Palestinian Arab national movement from the 1920s into the 1960s. The new generation led by Yassir Arafat learned a lesson from the Algerian FLN and the Vietnamese communists and adopted the brilliant public relations strategy of associating the Palestinian cause with “the historic process of the liberation of the oppressed peoples from colonialism and imperialism” (from a Fatah Party statement quoted by Muravchik on p. 29). The Palestinians were embraced by the Soviet bloc and by left-wing radicals and terrorists in Western Europe and beyond. Muravchik documents the sad history of Palestinian terrorism beginning in the 1960s and the craven response of European governments who time after time chose to capitulate and appease rather than punish the terrorists (Ch. 3). A key factor here was the Arab oil weapon, used to great effect during and after the 1973 Yom Kippur War and reinforcing the tendency of many governments around the world to be soft on terrorism and to shift increasingly away from Israel and towards the Palestinians (Ch. 4). The Social Democratic parties of Western Europe, led by the Jew-hating Jewish-Austrian Socialist Bruno Kreisky, found it quite easy after 1973 to rationalize their turn against Israel and towards the Palestinians (Ch. 6).

At the same time, the General Assembly of the United Nations was steadily increasing its membership as more and more nations shook off the shackles of Western colonialism and became independent. A large majority of these nations – Arab, Islamic, Communist, and “non-aligned” – gravitated towards the Palestinian side, forming the large, automatic, anti-Israeli majority that the Palestinians can still count on today in the General Assembly. Muravchik does an excellent job of documenting the way in which virtually every part of the UN has been captured by anti-Israeli and pro-Palestinian forces (Ch. 5). One of the many pernicious effects of this capture has been the absolute failure (or rather refusal) of the UN to condemn terrorism, all efforts to do so having foundered on the insistence of the General Assembly that the Palestinian people possesses the right “to regain its rights by all means” (pp. 75-6). Muravchik demonstrates the shocking and little-known fact that the UN has actually become one of the main legitimizers of terrorism in the world today.

Those of us who work in the field of so-called “higher education” can testify that the influence of fashion shapes the academic world every bit as much as it does the world of clothing or interior design. College professors who seek to “fit in” at the faculty lunch table (or, more to the point, to get published and tenured) quickly figure out that a certain range of opinions are stylish while others are, as the British like to say, “not quite the thing.” In the humanities and social sciences over the past 35 years, no one has set the trend more successfully than Edward Said, the Palestinian-American who was for decades a professor of literature at Columbia University. Muravchik devotes an entire chapter to the baneful influence of Said on American colleges and universities (Ch. 7), paying special attention to Said’s two blockbuster hits, Orientalism (1978) and The Question of Palestine (1979). These two books did not succeed on their merits, for they are replete with logical fallacies and factual inaccuracies, which Muravchik successfully exposes. Rather, they succeeded because they appealed to the prejudices of a post-Vietnam American professoriate that had long since decided that the source of all evil in the world was the racist, imperialist, colonialist mentality of white European males. Like all great fashion designers, Edward Said sensed the new trend that the market was craving and he gave it what it wanted, achieving fame and fortune in the process.  The result has been that Israel is increasingly seen as a white European colonialist outpost based on a racist ideology imposed on an innocent indigenous Third World people, the Palestinians. Never mind the ancient Jewish connection to the land of Israel. Never mind that in the late 1970s far more than half of Israeli Jews were refugees from Arab and Muslim countries and thus indigenous to the region. Never mind that Arab Muslims have their own history of imperialism, racism, and colonialism, and that Islamic imperialism and anti-Semitism have been central components of Palestinian nationalism since the 1920s. Facts and logic, it seems, have no chance against the power of fashion.

Muravchik does not allow Israelis themselves to escape entirely unscathed.  In a chapter entitled “Israel Shows a Less Endearing Face,” he documents the missteps of the Likud government of Menachem Begin and Ariel Sharon that came to power in 1977, including the aggressive push to build Jewish communities in the West Bank and the 1982 Lebanon war (Ch. 8). In another chapter (Ch. 9, “Israel Spawns Its Own Adversary Culture”) he explains how some of the most unhinged critics of Israel and Zionism are in fact Israeli Jews like Ilan Pappé and Simcha Flappan, ably assisted by non-Israeli Jews like Avi Shlaim, Noam Chomsky, Norman Finkelstein, and Judith Butler.  Here Muravchik gives a brief but judicious survey of the debates triggered by the so-called “New Historians,” Israeli historians who since the 1980s have challenged certain aspects of traditional Israeli history, especially as regards the 1948 war. He argues that left-wing anti-Zionist Jews have adopted the anti-colonialist paradigm of Edward Said and elevated their trendy leftism over their apparently less trendy Jewishness.

Muravchik’s conclusion is sobering for anyone who cares about Israel’s security and long-term survival. While the anti-Israeli left may espouse an ideology that does not resonate with average Americans, it has increasingly taken over university faculties, mainline churches, labor unions, human rights organizations like Human Rights Watch and Amnesty International, and even Jewish groups like J-street. As he puts it, “the anti-Israel movement knows it will score no sudden coup, but it is committed to the long war” (p. 231). The wars in Algeria and Vietnam in the mid-twentieth century demonstrated that a conflict is not necessarily won by the militarily stronger side, but by the side that can mobilize international political support by creating a perception of moral superiority. “For all its might, Israel remains a David, struggling against the odds to secure its small foothold in a violent and hostile region. The relentless campaign to recast it instead as a malevolent Goliath places it in grave peril” (p. 233).

Review of Making David into Goliath: How the World Turned Against Israel