New book probes the growing impact of BDS on academia

Published by a scholars’ rights group, ‘The Case Against Academic Boycotts of Israel’ includes 32 essays about the boycott movement’s crusade against the Jewish state 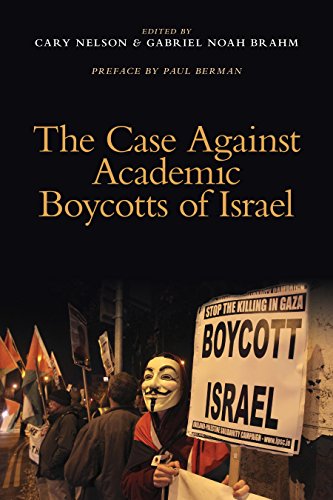 BOSTON — As more student governments take up votes to divest from Israel, the BDS movement’s roots in American academia are probed in a newly published essay compilation, “The Case Against Academic Boycotts of Israel.”

The 32-essay collection takes particular aim at the American Studies Association, which voted to boycott Israeli academic institutions at the end of 2013. Published by MLA Members for Scholars’ Rights, the book explores many facets of the Boycott Divest Sanction (BDS) movement against Israel, which is modeled on strategies used against apartheid in South Africa.

“The BDS movement is more harmful to the academy than it is to Israel,” said Donna Robinson Divine, a professor of Mideast studies at Smith College. Located in western Massachusetts’ Pioneer Valley, Smith has been a long-time hotbed of anti-Israel activity.

In February, Divine addressed a group of Northeastern University professors convened by the campus Hillel, in part to talk about the book. Her essay, “The Boycott Debate at Smith,” chronicled how some professors turned their classrooms into “a battleground” to push BDS, according to Divine.

“You can teach the Mideast conflict without taking sides,” Divine told attendees. “The problem is that we’re fighting an establishment now,” she said, referencing media outlets that print war crimes allegations against Israel before investigating them.

Divine warned against the danger of allowing BDS activists to “close off debate and the examination of issues” — something that has long plagued Palestinian society in its relations with Israel, she said.

After Divine and other contributors pick apart the American Studies Association, the book enters its meatiest section, called “The BDS Movement, the Left, and American Culture.” These ten essays explore the BDS movement’s ties to radical Islam, as well as the “intellectual incitement” behind anti-Semitism at universities worldwide.

In a section called “The Israeli Context,” contributors examine attempts to boycott Israeli universities and impose a “bi-nationalist fantasy” within academia.

Most of the authors featured in “Academic Boycotts” have published on the topic for years, but this is the first large-scale compilation of scholars critiquing the BDS movement at large.

“The book is a must-read for anyone who wishes to truly understand the historical and scholarly background regarding the nature of the BDS movement, including where and how it is positioned in the context of the Arab-Israeli conflict,” said Asaf Romirowsky, the executive director of Scholars for Peace in the Middle East.

In an essay he wrote with co-editor Gabriel Noah Brahm, Romirowsky calls on professors to “start defending liberal values by rejecting BDS demagoguery.”

“In fact, BDS supporters envision the replacement of Israel as a Jewish and democratic state with a bi-national, majority Palestinian, entity — otherwise known as a greater Palestine in a world without Israel,” wrote Romirowsky.

After reviewing the movement’s ideology and history, the authors accuse the BDS movement of “sugarcoating its toxic medicine” — namely, the destruction of the world’s only Jewish state.

Romirowsky joined Smith College’s Divine in addressing the Northeastern faculty gathering, during which some professors wanted the authors’ takes on anti-Semitic incidents that have occurred on campus. According to professors in attendance, these range from vandalism against Jewish property to specific professors’ anti-Israel activism in the classroom. 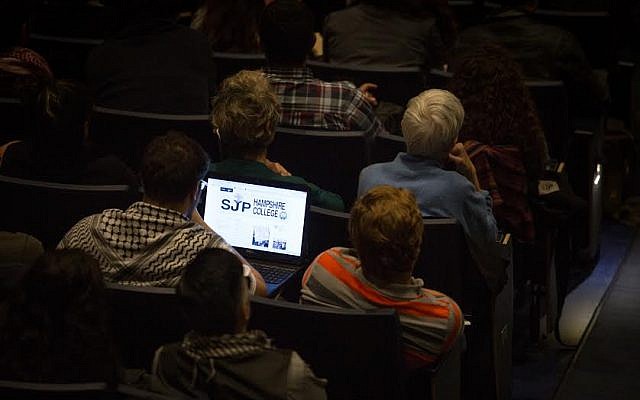 ‘Anti-Zionism, we insist, is a form of anti-Semitism, since when a people is denied its right to self-determination, that’s an attack upon that people, as a people’

“We argue that the intent of BDS is anti-Semitic, even if its effect on most adherents is not to turn them into anti-Semites,” Romirowsky told The Times of Israel after the event.

“Anti-Zionism, we insist, is a form of anti-Semitism, since when a people is denied its right to self-determination, that’s an attack upon that people, as a people,” he said.

The role of anti-Israel activism among Jewish academics is not skirted in the compilation, which devotes a full essay to Judith Butler, one of the most prominent Jewish BDS voices in American academia.

In “The Problem with Judith Butler,” co-editor Cary Nelson explains how Butler, a gender theorist, became fixated with dissolving the state of Israel while helping to ignite the boycott movement.

“Like other BDS proponents,” writes Nelson, “[Butler] avoids any serious reflection on what would constitute political self-determination for Israelis, save for the implication that Israeli hearts can never really be at peace until Palestinians have secured all their wishes.” 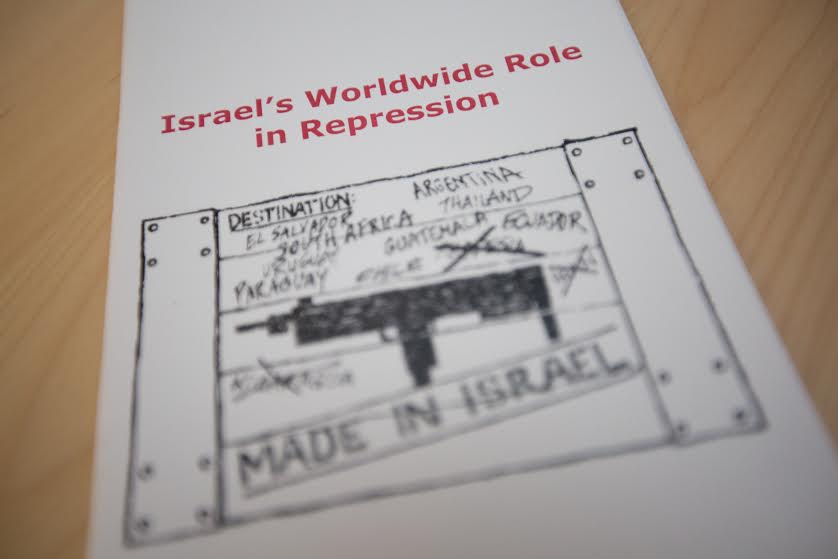 In Nelson’s eyes, Butler — who sits on the advisory board of Jewish Voice for Peace — symbolizes the essence of the movement she champions.

“If Butler is the best BDS can offer in the way of a rational case for their cause, and her work is fundamentally flawed by its unmitigated hostility toward Israel, American academics instead might begin their own education by reading what Israeli historians and journalists have to say about their own country, a country and situation they know and understand,” writes Nelson.

‘We have no idea of the future impact of the constant drip, drip, drip of accusation and portrayal of Israel as evil’

Whether taken up by student governments, faculty members, or other groups, university BDS motions rarely make it past a vote. However, the simple act of airing BDS motions is, in itself, a long-term strategy used against Israel, according to Samuel M. Edelman.

“In the end, we cannot permit ourselves to forget that any one boycott, divestment, or sanction initiative contains within it long term seeds of doubt about Israel and Israelis that left to fester might have consequences far beyond anything we can imagine today,” writes Edelman in the essay he co-wrote with Carol F.S. Edelman, “When Failure Succeeds: Divestment as Delegitimization.”

“We have no idea of the future impact of the constant drip, drip, drip of accusation and portrayal of Israel as evil on the minds of students who witnessed BDS activities on their campus,” Edelman concludes.

New book probes the growing impact of BDS on academia

Published by a scholars’ rights group, ‘The Case Against Academic Boycotts of Israel’ includes 32 essays about the boycott movement’s crusade against the Jewish state