Muslim Hard Core anti-Semitism Comparable to that of the Nazis 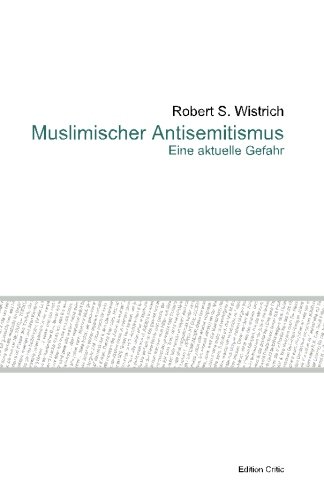 Historian Robert Wistrich holds the Neuberger Chair for Modern European and Jewish History at the Hebrew University of Jerusalem. Since 2002, he has served as Director of the Vidal Sassoon International Center for the Study of anti-Semitism at this university.

After the mass murders in New York and Washington on 11 September 2001 which was perpetrated mainly by Saudi Muslims, Wistrich wrote a lengthy essay on Muslim anti-Semitism for the American Jewish Committee which it published a year later.[1] The present book in German is an update of this text. It concludes with an epilogue in which the author looks back over the last decade.

Wistrich claims that hard-core anti-Semitism in the Arab and Muslim world is comparable only with that of Nazi Germany (p. 109). Expressing such an opinion is far more than an academic judgment. It is an act of courage, because much more gentle criticism about ugly phenomena in Muslim societies is already often labeled as Islamophobia. Not only do Muslims try to stifle such criticism, but also many “politically correct” Westerners. Long ago, these individuals gave up on the truth. Their ideological credo is “solidarity with the weak,” which frequently turns them into indirect or even direct apologists for and enablers of ideological criminality.

Wistrich explains that Muslim hatred for Israel and Jews is “an eliminatory anti-Semitism with a genocidal dimension.” While the anti-Semitism of the Germans and their allies ultimately led to the Holocaust, Wistrich says that “the wildness of the Arab and Muslim anti-Semitism” can be considered a “warrant for genocide” today. He mentions that this term was coined by well known historian Norman Cohn.

Wistrich further supports his assertion by making a comparison.  There had been major demonization of the Jews during the Christian Middle Ages, the Spanish Inquisition, at the time of the Dreyfus Affair in France, and in Czarist Russia. However, none of these cases compared with the intensity and pervasiveness of Nazi and Islamic anti-Semitism.

The author observes that substantial parallels between the two murder-propagating ideologies are not surprising. Arab nationalism and Islamic fundamentalism developed significantly in the 1930’s, concurrent with the Nazis’ rise to power in Germany. Wistrich mentions that, even then, there was much collaboration between groups in the Arab world and the National Socialists, and many Arab thinkers admired Hitler (p.110). As common elements between Muslim and Nazi anti-Semitism, Wistrich lists the fanaticism, the cult of death, the nihilistic wish for destruction, and the mad lust for world hegemony (p. 101).

Part of this book’s importance derives from the fact that it enables us to learn much about Muslim anti-Semitism in the years which preceded 9-11. The focus of many other publications on Muslim-anti-Semitism has usually been on the past decade.

Wistrich shows that all key elements of Muslim anti-Semitism were largely in place by the turn of this century. He mentions the use of texts from the Koran which were turned into actual anti-Semitic hate mantras, the frequent imports of the Protocols of the Elders of Zion into the Islamic world, the denial of the Holocaust, the spreading of blood libels and other extreme anti-Semitic stereotypes, as well as Nazi inspired hate cartoons.

Wistrich also mentions that well before 9-11, many Muslim and Arab immigrants to Europe and Western democracies brought with them the anti-Semitism of their countries of origin. Many of them in their new places of residence further developed hatred of America, Israel and the Jews.

The focus on problems caused by Muslims may change according to the times, but the quintessence remains the same. When Wistrich wrote his original text, the murders of 9-11 and fear of anthrax attacks were prominent issues (p. 59). These have since become secondary themes. One can agree with Wistrich when he writes that the key elements have already been prominent for at least twenty years. (p. 87)

In his analysis of Muslim attitudes toward Holocaust denial, one of the several issues to which Wistrich devotes attention is the Garaudy affair. This French leftist intellectual, who converted to Islam, claimed in his book, The Founding Myths of Modern Israel,  that Jews themselves had created the Holocaust for financial and political gain. Garaudy’s text became a best-seller in many Middle Eastern countries. He became a hero in large parts of the Middle East, and his popularity increased after he was found guilty in a 1998 a court trial. (The wife of the head of the United Arab Emirates Sheikh Zayed ibn Sultan al-Nahayan made a major donation for his defense. Seven members of the Association of Lawyers from Beirut offered their help in his court case, and the Arab Union of Lawyers in Egypt sent a legal team to Paris to support Garaudy in his trial [p. 79-81]).

One can only highlight a few of the many other important issues the author raises. Among them is the impact of the “political correctness” in the West. Wistrich asserts that when Presidents George W. Bush and Obama termed the war against Al Qaeda a “war against terror,” in order to avoid insulting Islam as a religion, they emptied it of content.

There are many other manifestations of this political correctness. The many murders of innocent civilians by Jihadists are still met with “ambivalent and hesitant” reactions in the West. People react this way order to avoid criticizing the doctrines of Islam.

Events which occurred after the publication of this book provide further confirm Wistrich’s analysis. During the past year, thousands of Muslim civilians have been killed, the great majority of these by their coreligionists. In March 2012, Mohamed Merah murdered three French soldiers, a Jewish teacher and three Jewish children for ideological reasons.  This nefarious deed demonstrates the results of continued Muslim incitement against the West, Jews and Israel.

After Merah’s murders, some made efforts made to whitewash his crimes. Some Muslims regaled him as a hero. A Facebook page glorified him. It had to be taken down at the request of French authorities. Nevertheless, this exaltation was more subdued than the joy exhibited in many Muslim circles at the “success” of the murders of 9/11.

Much more harmful, however, is the fact that Western politicians and media continue to avoid addressing the root issues. Instead, they prefer to ask how a “lone wolf” murderer arrived at his deeds.[2] The main questions to be illustrated in greater detail should have been: who are the real inciters to murder and hatred in the Muslim world? How are they organized? How much support do these inciters have in various Muslim countries and in the West? Which organizations bring hate-filled imams and other inciters into the Western world? After the recent murders in France, the government forbade visits of religious Muslim hate-mongers. One of the first to be denied entry was Sheikh Yusuf al-Qaradawi, the spiritual leader of the Muslim Brotherhood. Those who had invited him to France were not marginal groups, but the major Union des Organisations Islamiques de France (UOIF).

Wistrich was one of the first to describe the expressions of  the extraordinary ideological criminality – such as calls for murders in the name of Islam and glorification of terrorists — which a already decade ago permeated large parts of the Muslim world, including Palestinian society. In this new edition, he sharpens this perspective without retracting anything fundamental which he wrote in the earlier version. This in itself is an honorable ac complishment.

In his foreword, Clemens Heni states that post-war anti-Semitism in Germany has never been so accepted and disseminated as it is today.[3] He contends that the German anti-Semitism expert, Werner Bergman, has mistakenly asserted that rarely has anti-Semitism in Germany been pushed so far to the sidelines. Heni, who translated Wistrich’s book, stresses that there is still little ideological analysis of the various forms of Islamism, despite the fact that for decades Wistrich has called for such a specific analysis of Islamism, the Muslim brethren and Arab nationalism.

At the end of the book, a few hate cartoons from the Arab world are included. They offer further examples of the extreme hatred of Israel and Jews in major Arab media. Included are the cover of a book with a swastika and the Star of David interconnected, which the Arab Lawyers Union distributed in 2001 at the U.N. Anti-Racism Conference (WCAR) in Durban; a picture of Ariel Sharon as Hitler’s successor in major Egyptian daily Al Gumhuria and a short list of Nazi crimes compared with a long list of Israel’s “crimes;” in the Syrian daily Tishreen which is associated with the country’s government. These provide graphic proof of Wistrich’s on-target thesis concerning the true nature of Muslim anti-Semitism.

Manfred Gerstenfeld is Chairman of the Board of Fellows of the Jerusalem  Center for Public Affairs. He has published 20 books, several of which deal with anti-Semitism and anti-Israelism.

[3] Clemens Heni is a political scientist, founder of the Berlin International Center for the Study of Antisemitism (BICSA), and publisher (Edition Critic in Berlin)

Muslim Hard Core anti-Semitism Comparable to that of the Nazis