Jihad, Conflict, and Culture- Bostom on Salzman’s “Culture and Conflict in the Middle East” 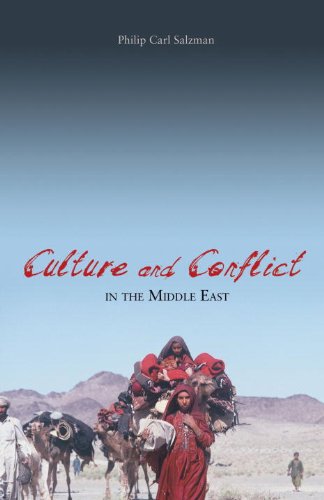 Prevailing academic pedagogy on Islam is epitomized, luridly, by Dr. Denise Spellman, the faux scholar whose recent unhinged behavior “persuaded” craven Random House to quash publication of Sherry Jones’ “biographic novel” about Muhammad’s child-bride Aisha, “The Jewel of Medina” — this, despite the fact that the book is a celebration of Islamic pedophilia and polygamy (albeit, asexcerpts reveal, “The Jewel of Medina” is a distressingly stupid apologetic).

Professor Salzman, the founding chair of the Commission on Nomadic Peoples, who served in that position for 15 years (1978-1993), previously conducted fieldwork among nomadic, pastoral tribes in Iranian Baluchistan in 1967-68, 1972-73, and 1976. He is the author of the earlier anthropological studies, Black Tents of Baluchistan; Pastoralism: Equality, Hierarchy, and the State; and Understanding Culture. Central to understanding Salzman’s conception of Middle Eastern Arab culture is the form of social control he denotes as “balanced opposition.” His operational definition of this “ingenious” system for providing security, in particular, is as follows:

Everybody is a member of a nested set of kin groups, from very small to very large. These groups are vested with responsibility for the defense of each and every one of its members and responsibility for the harm each and every one of its members do to outsiders. This is called by anthropologists “collective responsibility,” and the actions taken by a group on its own behalf are called “self-help.” If there is confrontation, small groups face opposing small groups. Middle-sized groups face opposing middle-sized groups, or large groups face opposing large groups: family vs. family, lineage vs. lineage, clan vs. clan, tribe vs, tribe, confederacy vs. confederacy, sect vs. sect, the Islamic community (umma) vs. the infidels. This is where the deterrence lies, in the balance between opponents; individuals do not face groups, and small groups do not face large groups. Any potential aggressor knows that his target is not solitary or meager, but is always, in principle, a formidable formation much the same size as his.

Salzman argues that Islam serves as the penultimate hierarchy overlaid upon all these smaller, and subordinate divisions, standing in balanced opposition against non-Muslim peoples and their nations. And although Salzman acknowledges certain decentralized, egalitarian aspects of balanced opposition at the tribal level, he also emphasizes its core “particularism of loyalties,” which engenders anti-democratic tendencies, inconsistent with a “universalistic” normative.” Thus Salzman concludes that balanced opposition is not conducive to,

…constitutional rule in which rules apply to all and are upheld by all at all times. Particularism and contingency, so basic to complementary opposition, preclude universalistic constitutional frameworks and thus inhibit social and political integration at broader territorial levels including larger and diverse populations.

Salzman withholds any final professional judgment that might appear disparaging,

…it is not the job of anthropologists to laud societies or to criticize them, or to celebrate or to demean them. So problems and difficulties are a very delicate matter to address, even more when they appear to be culturally driven.

He nevertheless does not shy away from concluding that,

In support of these conclusions, Salzman adduces grim statistics from the 2002 Arab Human Development Report on the Middle Eastern Arab nations: the lowest freedom scores, reflecting an array of measures of social, political, and religious freedoms, including a specific “women’s empowerment deficit”; poor educational development which contributes to abysmal levels of scientific research and development, and sustained human poverty, despite massive oil wealth.

Salzman provides concrete illustrations of how balanced opposition functions in the feud and vendetta dynamics among the Baluch (in the border areas between Iran, Pakistan, and Afghanistan), “kin groups” in Gaza, or the Bedouin in Israel. His dispassionate observations convey the terrible costs incurred by this “ingenious” system’s obsession with security, and intimately related notions of “honor.” And these bloody dynamics persist, unfortunately, at what Salzman refers to as “higher levels of integration,” causing,

…sectarian conflicts…in sophisticated cities far from the deserts: the Shiite-Sunni conflict for domination [which] destroyed Beirut in the 1980s, just as it undermined Karachi at the turn of the millennium, and is washing Baghdad in blood at the time of this writing [2007].

But Salzman’s most important and intellectually courageous contribution to our understanding is his clear delineation that Islam’s eternal institution of jihad war represents the apotheosis of balanced opposition. He alludes to Evans-Pritchard’s characterization of how the Bedouin of Cyrenaica [Libya] “compensated” for their less than assiduous fulfillment of the ritual requirements of Islam, by their zealous commitment to jihad. Here is the full description from the original (1949) text by Evans-Pritchard:

It would [also] be a questionable judgment to assert that the Bedouin of Cyrenaica are not religious because they do not pay the same attention to outward ritual as do townspeople and peasants, for piety and holiness, as we have often been admonished, are not the same…

Perhaps the Bedouin make up for their shortcomings by their enthusiasm for the jihad, holy war against unbelievers. They consider that they have fulfilled their obligation under this head in ample measure by their long and courageous fight, formally declared a holy war by the Caliph of Islam, against the Italians, French, and British. A Bedouin once said to me when I remarked how rarely I had seen Bedouin at prayer: “nasum wa najhad, (but) we fast and wage holy war.”

Salzman devotes an entire chapter to the unapologetic description of the living, uniquely Islamic institution of jihad war, whose past historical ravages extended from Iberia to the Indian subcontinent, north into Poland, and south to sub-Saharan Africa. Following this outline of jihad war theory, accompanied by salient examples of its consistent brutal practice, he also elucidates the imposition of dhimmitude-Islam’s sacralized, humiliating governance of those non-Muslims vanquished by jihad. Along the way, Salzman firmly rejects the bowdlerized narrative of the jihad conquests espoused by anthropologist Charles Lindolm, a Professor at Boston University. Lindolm’s absurd hagiography (from The Islamic Middle East Malden, MA, 2002, p. 79) contends reverently, and without any qualification, that, “The rise of Islam was both an economic and social revolution, offering new wealth and freedom to dominions it assimilated under the banner of a universal brotherhood guided by the message of the Prophet.” Salzman, in his apt reply, observes acidly,

Yes, no doubt it was the best of all possible worlds; that is if one had not been one of the multitude slain, the myriads enslaved, or the remainder expropriated, suppressed, and degraded.

Salzman completes his frank discussion of the jihad with a synopsis of Samuel Huntington’s mid-1990s paradigm of Islam’s “bloody borders. “ Huntington, Salzman reminds us, adduces convincing data in support of his contention that, “Wherever one looks along the perimeter of Islam, Muslims have problems living peaceably with their neighbors.” Salzman cites these germane observations by Huntington, noting how they have been confirmed (one could argue even amplified), subsequently, in the wake of the September 11, 20001 attacks on the U.S., and their aftermath.

The overwhelming majority of fault line conflicts,…have taken place along the boundary looping across Eurasia and Africa that separates Muslims from non-Muslims.

…Intense antagonisms and violent conflicts are pervasive between local Muslim and non-Muslim peoples.

…Muslims make up about one-fifth of the world’s population, but in the 1990s they have been far more involved in inter-group violence than the people of any other civilization. The evidence is overwhelming. There were, in short, three times as many inter-civilizational conflicts involving Muslims as there were between non-Muslim civilizations.

…Muslim states also have had a high propensity to resort to violence in international crises, employing it to resolve 76 crises out of a total of 142 in which they were involved between 1928 and 1979…When they did use violence, Muslim states used high-intensity violence, resorting to full-scale war in 41 percent of the cases where violence was used and engaging in major clashes in another 39 percent of the cases. While Muslim states resorted to violence in 53.5 percent, violence was used the United Kingdom in only 1.5 percent, by the United States in 17.9 percent, and by the Soviet Union in 28.5 percent of the crises in which they were involved…Muslim bellicosity and violence are late-twentieth-century facts which neither Muslims nor non-Muslims can deny.

G. H. Bousquet, the great 20th century scholar of Islamic jurisprudence , observed how the permanent institution of jihad war, and the related imposition of Islamic Law (Shari’a) upon all of humanity — both Muslims and non-Muslims — reflected the “doubly totalitarian” quintessence of Islam. Salzman’s analysis demonstrates further how balanced opposition functioning at subordinate levels of organization (i.e., relative to Islam and the Islamic umma) — from lineage, clan, and tribe, through tribal confederacies — amplifies “particularisms” that also promote, anti-democratic authoritarianism. The late P.J. Vatikiotis (d. 1997), a renowned political scientist who focused on the modern era in the Middle East, and also lived for extended periods in the region, combined, to an extent, the perspectives of Bousquet and Salzman in this 1981 analysis (from Le Debat, [Paris], no. 14, July-August, 1981):

What is significant is that after a tolerably less autocratic/authoritarian political experience during their apprenticeship for independent statehood under foreign power tutelage, during the inter-war period, most of these states once completely free or independent of foreign control, very quickly moved towards highly autocratic-authoritarian patterns of rule…One could suggest a hiatus of roughly three years between the departure or removal of European influence and power and overthrow of the rickety plural political systems they left behind in Syria, Egypt, Iraq, and the Sudan by military coups d’etat.

Authoritarianism and autocracy in the Middle East may be unstable in the sense that autocracies follow one another in frequent succession. Yet the ethos of authoritarianism may be lasting, even permanent…One could venture into a more ambitious philosophical etiology by pointing out the absence of a concept of ‘natural law’ or ‘law of reason’ in the intellectual-cultural heritage of Middle Eastern societies. After all, everything before Islam, before God revealed his message to Muhammad, constitutes jahiliyya, or the dark age of ignorance. Similarly, anything that deviates from the eternal truth or verities of Islamic teaching is equally degenerative, and therefore unacceptable. That is why, by definition, any Islamic movement which seeks to make Islam the basic principle of the polity does not aim at innovation but at the restoration of the ideal that has been abandoned or lost. The missing of an experience similar, or parallel, to the Renaissance, freeing the Muslim individual from external constraints of, say, religious authority in order to engage in a creative course measured and judged by rational and existential human standards, may also be a relevant consideration. The individual in the Middle east has yet to attain his independence from the wider collectivity, or to accept the proposition that he can create a political order.

Salzman concludes his own seminal work with a wistful admonition, in this closing statement,

Jihad, Conflict, and Culture- Bostom on Salzman’s “Culture and Conflict in the Middle East”


Read all stories by