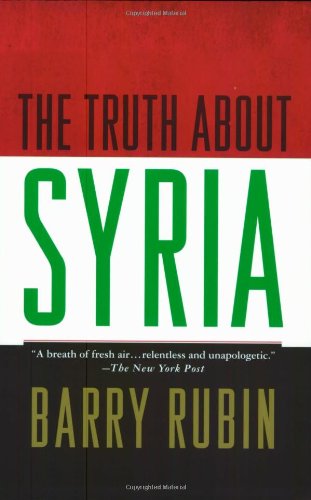 Barry Rubin is a member of SPME.

Barry Rubin is as qualified as anyone alive today to write a book that tells the truth about Syria. Author of several widely read studies of Middle East politics, he directs the Global Research Center on International Affairs, a think tank turning out publications pivotal to understanding this region. With his lucid prose, Barry Rubin communicates as well to the general reading public as to experts, and his books and essays now shape how many people think about the Middle East.

Every day, by the measures of its economic growth or by the criteria of its technological development, Syria becomes weaker, yet its capacity to influence events in the Middle East expands. Forced to withdraw its military from Lebanon, it has continued to disrupt the operations of that country’s government through its support for Hizbullah as well as through its ties to a number of other terrorist organizations. Rubin shows how Syria’s leaders who once wrapped their policies around Arab nationalist principles when those values were in vogue, more recently blend them around Islamist and anti-imperialist pronouncements. But whatever the rhetoric, the real ambition of Syria’s leaders has always been the same: to wield power without restraint both at home and in the region. This ambition has led Syria’s government to convert its country into a bastion of resistance against the current Palestinian-Israeli peace process, in opposition to the stabilization of Iraq in the aftermath of Saddam Hussein’s downfall and above all, against the full recovery of Lebanon’s sovereignty and of its constitutional order. Lebanon may have freed itself of military occupation but not of Syria’s capacity to bring its political life to a standstill.

Viewed, literally, then, The Truth About Syria is a meticulous accounting of the challenges and difficulties confronting that country’s regime during the past forty years. In explaining how the regime survived the 1990s, Barry Rubin writes,

Everything seemed to go wrong for Syria in the 1990s, but Hafiz maneuvered brilliantly-and his supposed enemies let him get away with a lot. At the end of the decade he was able to deliver to his heir an intact Syria that had not suffered during this era despite its weakness, numerous enemies, and determination not to make substantive concessions. The way Hafiz achieved this triumph tells a great deal about how Middle East politics works and why the West has been so ineffective in dealing with the region. [Page 97]

When one shifts perspectives, however, this book is entirely something else because Barry Rubin asks questions not typically posed in scholarly studies. First and foremost, he asks why the democratic, liberal West has been so blind to the barbarism of Syria’s regime and second, why it seems so willing to abandon its humanistic principles and enable Syria literally to get away with murder. No wonder Bashar al-Asad, like his father before him, prefers the firing of guns to the rule of law. No wonder since violence allows Syria to hold Lebanon hostage without penalty. In fact, instead of sanctions, Damascus receives a stream of petitions from the world’s global powers pleading for the captive country’s release. Captivating the hearts and minds of Western policymakers is the notion that if offered enough, the Syrian-Iranian alliance that operates with such devastating effect across the Middle East will dissolve. But Syria and Iran have forged a mutually convenient alliance that simultaneously strengthens the two regimes and consolidates their domination even as it harms the interests and lives of their citizens.

Read through the many calls from France, Europe, and even from some prominent American officials inviting Syria to join in efforts to stabilize Lebanon and not to obstruct its constitutional process, and you are unlikely to believe the regime’s regional strategy has been consistent over several decades and across two generations. As Barry Rubin notes,

Even in the West, where French and American antagonism toward Syria remained, it seemed as if everyone was calling for diplomatic engagement with Damascus [in the summer of 2006]. Attacking Israel by proxy, turning Lebanon into a hostage, and creating a big mess, Syria had not made itself a pariah but a sought-after interlocutor. [Page 225]

Whether because of circumstances or personal talents, Hafez al-Asad was more adept than his son at balancing his ties across the Sunni-Shi’a sectarian divide in the Middle East. A member of the most marginal of religious groups in the Middle East and a descendant of the peasantry, Hafez al-Asad rose to power through the only means available to him-the military. Accustomed to violence, Hafez al-Asad was capable of great cruelty, but he was also wary of wielding his sword too publicly and too frequently. Conscious that he was not a full member of the region’s Arab community because he was not a Sunni Muslim-widely believed the cornerstone of legitimacy in the Middle East-he preferred to move his troops and weapons across borders only when backed by a regional consensus that to do so would advance the Arab nationalist cause. But for the son, Hafez al-Asad’s agenda was merely suggestive. Frightened, perhaps, when America’s call for promoting democracy in the Middle East had some weight or emboldened when this humanistic project was scuttled by events in Iraq, Bashar al-Asad has plotted a course in which Syria has joined Iran in an increasingly symbiotic relationship.

Thus while the book’s title summarizes Barry Rubin’s claims, it also suggests the political nerves the author wishes to touch. Barry Rubin hopes to dislodge both the false assumption that any combination of incentives can turn Syria against Iran and the equally misguided perception that Syria does not count for very much in the region. Syria provides Iran with its bridge to the Arab world and passivity from the international community enables both regimes to harden their dictatorships, trigger more violence, and drive those forces widely viewed as America’s allies into disintegration. Rather than a stimulus to brinkmanship, then, this book is a call for a foreign policy that is both consistent and coherent. Not answering this call will, unfortunately, be an invitation to more disorder.