A Review of The Definition of Anti-Semitism 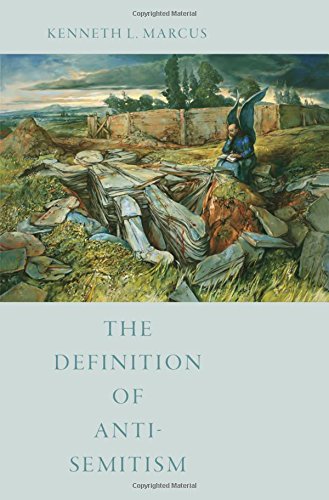 Academics concerned about both anti-Semitism and the free exchange of ideas have at least two worries.

On the one hand, anti-Semitism is one of few forms of prejudice that require a high standard of proof in the academy. Attend a party at which sombreros are worn, and you may find yourself threatened with disciplinary proceedings. Make a speech that levels wild accusations Israel, using barely dressed up versions of old school anti-Semitic slanders, and you may find yourself applauded. Academics who care about anti-Semitism are justifiably frustrated that some on the left, otherwise acutely sensitive to “microaggressions” insist that anti-Semitism be quite crude—swastikas, Nazi salutes directed at Jews, and so on—before it rates.

On the other hand, the left’s sensitivity to microaggressions isn’t necessarily a model worth emulating, especially at universities. The free exchange of ideas suffers when speakers are routinely drummed out of civilized discourse on suspicion of crossing a variety of lines. Neoconservatives are Islamophobes. Critics of feminism are misogynists. Supporters of aggressive policing strategies are racists. Although such speakers are almost never banned from campuses, the message is clear enough: decent people shouldn’t engage them.

Nowadays, these two worries are in play when it comes to anti-Zionism, especially as it manifests itself on campuses. Is anti-Zionism a form of anti-Semitism? Should one cheer the University of California Regents Working Group on Principles of Intolerance when it declares that “anti-Zionism and other forms of discrimination have no place at the University of California?” Or should one be worried, even though the authors wish to condemn rather than impose penalties for anti-Zionism, that such declarations discourage legitimate debate.

How one resolves such questions hinges in part on the definition of anti-Semitism, the subject of Kenneth Marcus’s thought-provoking book. If we could be certain about what speech is racist, anti-Semitic, or misogynistic, few would object to college officials condemning it, even if many commentators would still object to punishing such speech. But it turns out, as Marcus explains in The Definition of Anti-Semitism, that it is not easy to be certain, at least with respect to anti-Semitic speech, because “the definitional issue has arisen as the central question in the contemporary study of anti-Semitism” (6).

Marcus is no bystander when it comes to the issue of anti-Semitism. In government, as head of the Office of Civil Rights, Marcus established a policy according to which Jews (and Muslims and Sikhs) are entitled to protection under Title VI of the Civil Rights Act of 1964, even though Title VI does not cover religion. Out of government, as founder and president of the Louis D. Brandeis Center for Human Rights Under Law, he has sounded the alarm about and provided tools to fight a resurgence of anti-Semitism on college campuses.

Yet he has produced a book that, although it is in some ways a work of advocacy, takes seriously the idea that in order to combat anti-Semitism, one needs to understand it. Thus the bulk of The Definition of Anti-Semitism addresses a series of questions concerning the character of anti-Semitism. Is anti-Semitism best viewed as an attitude, conduct, ideology, or pathology? Is it  about race or religion? Is anti-Semitism an aspect of a more general phenomenon, like ethnic conflict, or is it unique? Is it persistent and continuous, or a distinctively modern and heterogeneous phenomenon? Is it best understood as directed at actual Jews, because they are Jews, or as directed at a “distorted image of Jewish identity”? In the chapters that treat each of these questions, Marcus clearly lays out the opposing positions that scholars of anti-Semitism have taken on these matters and indicates some of their strengths and weaknesses. But for the most part, his strategy, is to get beyond these oppositions.

Let Marcus’s treatment of race and religion serve to indicate how this approach works. Religious discrimination, as early as the Middle Ages, was connected to “bad blood”—Spanish Catholicism was “obsessed with lineage.”  Racial anti-Semitism depends on and so  “never fully departs from the religious concepts that had long undergirded Jew-hatred.”  So racial and religious anti-Semitism are hard to keep separate. Moreover, insofar as the concept or religion “as it is commonly used, reflects a distinctively modern and Protestant understanding of the relationship between the individual, faith, and community,” and race is a “meaningless classification,” it hardly seems likely that we will arrive at a clear understanding of anti-Semitism by thinking in terms of those problematic categories. Instead Marcus urges us to focus on the “underlying phenomenon” by means of which “the Jew” is constructed both in terms of the “inherited group traits, often associated with bestial characteristics,” which seem racial, and in terms of  “Jewry’s cosmically evil status,” which seems connected to religion.

Like most of the Definition of Anti-Semitism, this argument seems persuasive to me. But here, in the explanation of the underlying phenomenon that manifests itself in religious, racial, and hybrid anti-Semitisms, is where things get messy. Recall first that Marcus rejected racial and religious categories because they did not promise sufficient clarity. Then turn to part of Marcus’s explanation of the notable fact, which Marcus properly draws attention to, that Jews are invested by their haters with contradictory characteristics. I am compelled to quote at length:

“[The Saudi-born scholar] Al Haddad’s theozopmorphism (to borrow Jacques Derrida’s term)which permits the representation of persons in terms of “divinimality” (another Derridaism) requires some elucidation. What is interesting here is the discernment of a shared ahumanity of the excluded superhumanity and subhumanity.”

Setting aside the jargon, which may, after all, turn out to be a precise means of expressing an idea that would otherwise be hard to express precisely, Marcus’s explanation for how Jews come to be invested with both subhuman and superhuman characteristics is frankly speculative. The “primal opposition,” Marcus asserts, “to divinity and bestiality arise from anxieties, respectively, about mortality and weakness.” The “mortal’s sense of ungodliness is fed by the need to curb tendencies toward aggressive behavior. Similarly the sense of inanimality is increased by [the] need to curb sexual activity . . . . The in-group, despising these internal traits, draws a circle around the polity and projects the disowned characteristics upon those positioned as outsiders. Thus, the Jewish political outsider is imagined as a demon beast.”  What one thinks of this explanation depends, in the first place, on what one thinks of psychoanalytic explanations of history.

This mode of explanation is not limited to the chapter on race and religion. For example, in trying to get beyond the tension between anti-Semitism as “a discrete phenomenon or a mere generic manifestation,” Marcus proposes that anti-Semitism is a “the nodal point that quilts together a multitude of proto-ideological elements or floating signifiers and fixes their meaning.” Here Marcus draws on “Slavoz ŽiŽek, Ernesto Laclau, and Chantal Mouffe” who in turn draw “on the psychoanalytic work of Jacques Lacan and the linguistics of Ferdinand Saussure.” I agree with Marcus that anti-Semitism serves, at least at times, to provide a “central inexplicable figure by means of which everything else can be explained,” but it is not obvious, at least from Marcus’s account, that Žižek and company are much help in explaining why and how the Jews in particular come to occupy this peculiar position. Indeed, I confess, at the risk of outing myself as a philistine, that when I read a sentence that starts “Žižek provides the clearest explanation,” my heart sinks.

Yet Marcus does not depend on such an elaborate philosophical apparatus to deal with the kinds of “specific controversies” an Office of Civil Rights or a university administration find themselves up against. To deal with such controversies, Marcus argues, we should rely on “conduct-based definitions, such as the U.S. State Department definition, which helps guide our judgment as to what sorts of words and actions might count as anti-Semitic by providing a multitude of examples.  “Contemporary examples of anti-Semitism,” the State Department definition says, include, among other things, “making mendacious, dehumanizing, demonizing, or stereotypical allegations about Jews as such or the power of Jews as a collective—especially but not exclusively, the myth about a world Jewish conspiracy or of Jews controlling the media, economy, government or other societal institutions.” The State Department also, recognizing that contemporary anti-Semitism frequently manifests itself in attacks on the state of Israel, addresses the question “What is Anti-Semitism Relative to Israel?” building on Natan Sharansky’s 3D test and offering examples of demonization, double standards, and delegitimization.

Marcus is on record urging universities to adopt the State Department definition and he devotes a chapter to the circumstances under which anti-Israeli hostility may properly be considered anti-Semitic.       No serious observer will doubt that Marcus has it right when he says that anti-Zionism and other forms of hostility toward Israel may be consciously motivated by hostility toward Jews (intentionality), unconsciously so motivated (tacitness), or, regardless of motivation, so mired in a climate of opinion  in which “anti-Jewish stereotypes, tropes, and memes” readily come to lips and minds as to qualify as anti-Semitic (memetics). More controversial, but quite plausible is the claim that because “a sense of connection to Israel is a trait closely related to the Jewish people,” some “extreme abuse of Israel,” assuming that it is irrational, should be condemned as anti-Semitic “because it is objectively offensive to Jews.” Some such reasoning must lie behind the view that the declaration that “Zionism is racism” is anti-Semitic.

And yet, to return to one of the worries with which we began, it is not hard to see how the welcome and well-intentioned attempt to get colleges and universities to treat anti-Semitism with the same seriousness with which it treats other forms of prejudice might go astray. Marcus is admirably clear that even where speech is identified as anti-Semitic it may enjoy First Amendment protections. But private colleges and universities, unlike state universities, are not governed by the First Amendment, and so once one has declared speech anti-Semitic, or racist, or misogynist, the pressure and temptation to sanction or ban it may be very hard to resist. That doesn’t mean that college administrations should never condemn anti-Semitic speech (I have sometimes called for such condemnation myself) or, for that matter, that the State Department definition isn’t a useful tool with which to educate administrators. But once you set down in a handbook or code of conduct that, for example denying “the Jewish people their right to self-determination” is anti-Semitic, even if you qualify that suggestion, as Marcus does, by observing that context needs to be taken into consideration, that the guidelines are not “unrebuttable rules,” and that “there are some forms of anti-Zionism . . . that are not anti-Semitic,”  you invite nervous college administrations to go after legitimate speech.

That this slippage is not only possible but also likely is indicated by the way in which colleges and universities treat “hate speech” today and the way in which different groups on campus, including Students for Justice in Palestine, seek to shut down dialogue by portraying their opponents as bigots. Indeed, the University of California Regents Working Group on Principles of Intolerance to which I referred toward the beginning provides a perfect illustration of how slippage works, beginning with the true proposition that “opposition to Zionism often” (my emphasis) is expressed in anti-Semitic terms and graduating to the more dubious claim that “anti-Zionism . . . [has] no place at the University of California.”

Marcus, surprisingly in light of his concession that there are forms of anti-Zionism that are not anti-Semitic, has come out in favor of the latter statement. But academics concerned about both anti-Semitism and the free exchange of ideas may doubt whether he has here struck the right balance.

A Review of The Definition of Anti-Semitism