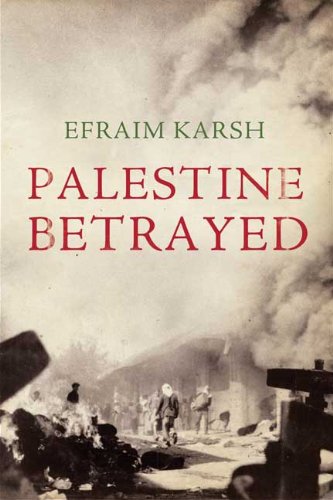 Efraim Karsh is a member of SPME.

There is only one country in the world whose “right to exist” -though recognized by the League of Nations nearly a century ago and realized in the United Nations by an internationally recognized act of self-determination in 1948—is considered a legitimate subject of discussion and debate. The reason why Israel has this unenviable distinction has little to do with the history of the Middle East “conflict” and much to do with the history of antisemitism. For example, a widely-publicized 2007 BBC poll of 28,000 people in 27 countries showed Israel as “least-liked” country in the entire world, and, among Europeans polled, most disliked in Germany; yes, in the very country where the Jews’ “right to live” was also once a popular topic, Israel-haters outnumbered Israel-admirers by 77% to 10 %.

Nevertheless, it’s important to recognize that those people for whom public denial of Israel’s “right to exist” constitutes a ticket of admission to “progressive” circles allege that Israel’s “original sin” consists of having come into existence as a result of ethnic cleansing of Palestine’s Arab population in 1947-48, as the British Mandate was coming to an end. Efraim Karsh’s Palestine Betrayed massively and irrefutably destroys this particular slander, showing that the flight of a large segment of Palestinian Arabs (somewhere between 538,000 and 609,000 refugees) was a self-inflicted calamity. It resulted from the disunity, corruption, abominable leadership and half-hearted loyalty among the Palestinian Arabs, and of territorial greed and imperial ambition among the Arab nations, who had no interest whatever in establishing a Palestinian state but only in grabbing some part of Palestine for themselves. If the invading Arab armies had succeeded in defeating the Jews and destroying the newly-created state, its territory would not have been handed over to the Palestinian Arabs but divided among the invading forces. Iraq and Transjordan, for example, declared their intention to occupy “the whole, repeat the whole, of Palestine” after the British withdrew. It was the Zionists and not the Arab states (which had been rejecting partition since 1937) who accepted a two-state solution.

Karsh’s book is less an act of discovery than of recovery, that is, taking us back to what was clear to everyone at the time, but in the intervening decades (starting in the early 1950s at the instigation of the Nazi collaborator Hajj Amin Husseini) has been obscured by layers of obfuscation, distortion, historical amnesia, and outright lies intended to cast Israel as the main culprit in the Palestinian “catastrophe” and transform the aggressors into helpless victims of, in the words of one Islamist leader: “an organized…cunning, devious, and evil people that…buried Hitler and defeated Japan…that has Truman in its pay, enslaves Churchill…and colonizes London, New York, and Washington.” Even Ben-Gurion’s insistence in October 1937 that “We do not wish and do not need to expel Arabs and take their place. All our aspiration is built on the assumption…that there is enough room in the country for ourselves and the Arabsm,” has been distorted to say exactly the opposite.

Palestine Betrayed is primarily a history of the five and a half month period between the passing of the UN resolution (November 29, 1947) to partition Palestine into two independent states, one Arab, one Jewish, with Jerusalem under an international regime (its residents free to choose citizenship in either state) and the end of the British Mandate. During that time the Palestinian forces of Husseini, assisted by a large pan-Arab irregular army, launched thousands of attacks on their Jewish neighbors to prevent establishment of Israel. But by May 14, 1948, when the state was proclaimed, 300,000-340,000 Arabs had fled their homes to other parts of Palestine and to the neighboring Arab states; eventually the number would swell to about 600,000.

Karsh, exploiting more fully than anyone ever has, the archival resources pertaining to the Arab “evacuation frenzy,” describes it in vast detail, takes account, in separate chapters, of local variations in Haifa (assigned to the Jewish state), Jaffa (assigned, as the most important Arab town in Palestine, to the Arab state), and Jerusalem, and analyzes its causes. Why did Palestinian Arab society collapse during those five and a half months of fighting? Why did huge numbers of Arabs, even while Jewish forces were on the defensive and in no position to drive them out, take flight while their Jewish neighbors, facing similar challenges and dislocations of war, and suffering a higher casualty rate, stay put and fight? Why, when the Jewish mayor of Haifa pleaded with them to remain where they were and promised to maintain harmonious relations, did the city’s Arabs listen to the Arab Higher Command that told them, in effect, to “get out so we can get in”? In the event, of course, it was the Arab leaders themselves who proved most eager to get out of Palestine and stay out; and this failure of leadership was a leading cause of the more general flight.

But there were still more grievous failures. In a striking prefigurement of today’s Middle East impasse, the Arabs gave much higher priority to destroying someone else’s society over building their own. The commander of Jaffa’s Arab forces declared in February 1948: “I do not mind [the] destruction of Jaffa if we secure [the] destruction of Tel Aviv.” Arab leaders took it for granted that Arab departure would be a defeat not for them, but for the Jews because their remaining would constitute tacit acknowledgment of acceptance of a Jewish state. Karsh suggests yet another explanation of the Arab flight: namely, that Palestinian Arabs lacked a strong sense of national identity, cohesion, shared destiny. “Cities and towns acted as if they were self-contained units, eschewing the smallest sacrifice on behalf of other localities.”

Atrocity stories invented by Arab leaders exacerbated panic. Intended to incite hatred of the Jews, these tales created fear of them instead. The Deir Yassin killings, by Irgun and Lehi fighters, took place on April 9, 1948, but could hardly explain the enormous flight of Arabs-a third from Haifa, still more from Jaffa-before that. Moreover, the spectre of (conjectural) Jewish atrocities also had a deep psychological dimension, what Christopher Sykes called the Palestinians’ “bad conscience” about their own actual atrocities against Jews. In 1921 they had murdered 90 Jews in Jaffa; in 1929 they had butchered 133 Jews in several locations, most hideously in Hebron, where, in Sykes’s words, they committed “deeds which would have been revolting among animals”; and in April 1948 they murdered 77 doctors, nurses, and scientists en route to Hadassah Hospital. They thought Jewish forces, given the upper hand, would behave as they themselves had done.

Will Karsh’s book explode the big lie about Israel’s origins? Perhaps not. “Lies,” according to Mark Twain, “have long legs” and get halfway around the globe before truth even begins to catch up with them. Still, we ought to know what the truth really is.

Edward Alexander is co-author, with Paul Bogdanor, of The Jewish Divide over Israel: Accusers and Defenders (Transaction Books).