A Workbook for fighting antisemitism that falls short

Strategies for fighting antisemitism in a book that will give strength to the cause. Nevertheless, the suggestions all just seem to fall short of the mark 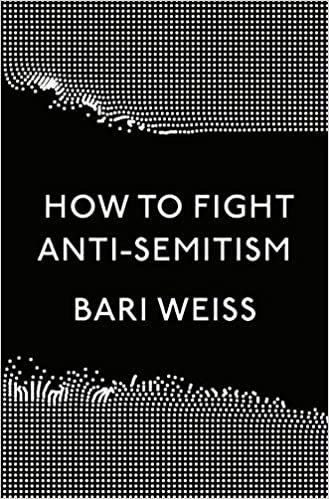 Bari Weiss, author of How to Fight Anti-Semitism ( Crown, 2019), is a seasoned writer. She learned her trade at Tablet, the Wall Street Journal, and The New York Times. How to… reads like a workbook manual interspersed with enough stories, anecdotes, and taste of a memoir, to make the book a worthwhile and enjoyable read.  But it falls short of making any transformative statement that will give pause or end to American Jews being the whipping boy of the Left, the Right, and Radical Islam.

Weiss you might imagine with her credentials currently as Op-Ed staff editor at The New York Times is another predatory progressive Jew selling Israel down the river. Wrong. She shares a kinship with the liberal wing of her generation but Weiss takes every opportunity to remonstrate about the right of Israel to exist in her written words and television appearances.

She is a favorite guest on Real Time with Bill Maher where they comfort one another in banter about radical Islam, the “BDS bulls**t purity test,” and slam Democrats who support attacks on Israel. She recognizes the risks to her and Maher of becoming “politically homeless” but soldiers-on defending the little state while expostulating about Trump along with Maher who calls the President “little Hitler-adjacent.”

The book is laced with love for the Jewish People and stories about our place in history. Weiss defends the existence of the State of Israel. Both positions are emetics for the community of readers Weiss daily writes. But like so many Jews fighting antisemitism, Weiss plugs-in the requisite apologia to show thersitical Anti-Semites/Anti-Zionists that proud Jews struggle with our people’s shortcomings: the reactionary government of Israel, the Occupation, the treatment of Israeli Arabs. Weiss succumbs to this enigmatic mirage with qualifiers like, “Supporting Israel does not mean—I cannot believe I have to say this—never criticizing it.”

In How to…” the apologia is a more gossamer thread but shirty enough to not save Weiss from vile attacks. One vogue-maker magazine summarizes the hate for Weiss and her book.

Meet Bari Weiss, they wrote, “alt-righter,” “fascist,” “the Jewish, female version of Kanye West.” She doesn’t like immigrants. She’s a traitor to her gender, and she should be “sterilized…” That’s the word, anyway, about the 35-year-old star opinion writer for The New York Times, from a very loud and increasingly influential corner of social media. Her newfound fame has transcended her platform. She’s become a somewhat unwitting avatar for the knee-jerk flash-bang of social media, a poster child for the polarization of the chattering classes.

Much of the book talks about American Jewish history. “George Washington’s radical proposition was that Jews would not be, as they always had been in history, second-class citizens in the new America.” She carries us through acts of hate from colonial times to Pittsburgh to California. The reader understands that 244 years later the Washington promise is yet unfulfilled. Israel supporter Donald Trump exacerbates the tenuous position of Jews in  America by linking the “racist suggestion that the congresswomen have dual loyalty (when they criticize America)” while the President defends Israel in the same breath.

Israel has become every hater’s tool, she argues. Weiss gives equal quarter to haters on the Left and Right. antisemitism is a stewpot stirred with both hands and seasoned with religious hate today, so Jews are “denigrated and dehumanized.”

Her outro is How To Fight.” Don’t try logic. Debates about Israel and hand-wringing over antisemitism are “a waste of our precious time (and) betrayal of what we were meant to do and be. I began to realize that building was better than begging, affirming better than adjuring.” She argues the first task is for Jews to be self-confident and secure in our Jewishness. Have “American and Jewish pride.”

Her other strategies for fighting antisemitism will then give strength to the cause. Nevertheless, they all just seem to fall short of the mark needed to turn the tide of rising antisemitism. She will do well to consider how Jews can be more aggressive and take the fight to the enemy. I have, and I suggest Weiss read my article at Scholars for Peace in the Middle East.

A Workbook for fighting antisemitism that falls short

Strategies for fighting antisemitism in a book that will give strength to the cause. Nevertheless, the suggestions all just seem to fall short of the mark