A review of The War on Error: Israel, Islam, and the Middle East 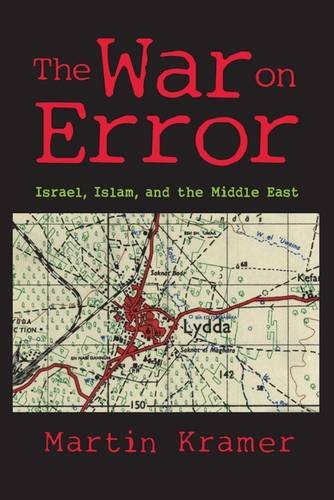 Martin Kramer chairs the Middle Eastern and Islamic Studies Department at Shalem College, having recently completed a seven year stint as president there. A scholar of the Middle East, Kramer is perhaps best known as a sharp critic of the field of Mideast Studies. An able polemicist and a superb writer, Kramer saw his 2001 book Ivory Towers on Sand: The Failure of Middle Eastern Studies in America touch off a debate that received coverage in, among other places, the New York Times. Kramer’s warnings about the politicization of the field have been more than amply validated by the steady movement of the Middle East Studies Association (MESA) toward casting off its frayed commitment to being a “nonpolitical” organization, and endorsing—it has not done so yet—the Boycott, Divestment, Sanctions movement against Israel.

But more important than Kramer’s skill as a polemicist and author is his dedication to scholarship. In the epilogue to his new book, The War on Error: Israel, Islam, and the Middle East, Kramer reminds us of what his mentor, Bernard Lewis, said about the scholar, that he  “owes it to himself and his readers to try, to the best of his ability, to be objective or at least to be fair . . . to try to present the different aspects of a problem and the different sides to a dispute in such a way as to allow the reader to form an independent judgment.” As anyone who knows his work will attest, Kramer does not conceal his political views. In a fine essay, “Policy and the Academy” originally published in the Middle East Quarterly, he wrestles, via a meditation on Middle East historian Elie Kedourie, with the difficulties a scholar confronts when he or she “takes a political position as a citizen,” which one may feel duty-bound to do when “surrounded by other scholars who advocate foolish or dangerous policies.” There is no simple way of resolving the tension between scholarship and politics, but The War on Error, though a collection of mostly previously published essays, blog posts, and speeches, is held together by its attempt to demonstrate by example how the norms of scholarship are essential to clear thinking about the Middle East. The highest praise I have of a book that is praiseworthy in many other respects is that it carries into the public sphere the spirit of the scholarly enterprise as Lewis described it.

The book is divided into five sections: one on Middle Eastern Studies (an “inexhaustible source of error in understanding the Middle East”; one on Islam and politics; one on the Arab world; one on the twisting of Israel’s history; and one, mischievously entitled “Elders of Zion,” on the leaking of “fantasies of Jewish power and control “into mainstream academic and public discussions. I cannot, of course, cover all twenty-five of the pieces that make up The War on Error. Let me begin with an essay that typifies the book.

Rashid Khalidi is the Edward Said Professor of Arab Studies at Columbia University and, as Kramer points out, he was “trained as a historian.”  In 2010, Khalidi spread in more than one lecture, the claim that the influential novel, Exodus, though written by Leon Uris, was “carefully crafted propaganda” guided by “seasoned professionals.” Foremost among them was Edward Gottlieb, regarded by some as “one of the founders of the modern public relations industry.” Gottlieb, who “desired to improve Israel’s image,” commissioned the novel then “funded [Uris] and send him off to Israel to write a book.” Khalidi is fond enough of this assertion to have permitted it to appear in an edited collection since. There is only one problem: not one thing Khalidi says, in his role as a distinguished historian, appears to be true.

How does Kramer find out? First, he researches Gottlieb, which is not easy since, far from being a founder of the modern public relations industry, Gottlieb is barely known, though he did once own the sixteenth biggest public relations firm in the United States. Having determined that Gottlieb was not among the founders of the modern public relations industry, and finding no references to him in histories of Zionism, Kramer next contacts the authors of two scholarly biographies of Leon Uris. Their reactions to the story range from suspecting it is a “complete canard” to being certain that it is a “complete fabrication.” Neither has seen any reference to Gottlieb, the supposed first mover of Exodus,  in Uris’s papers, which include contracts and correspondence related to the genesis (no pun intended) of the work and the funding, via advances on the proceeds of the book rather than by nefarious pro-Israel propagandists, of Uris’s  research. Where then, did Khalidi get his claim? Kramer finds it in three “classics of the Israel bashing canon,” each of which rely on a single source, a 1985 how-to book on public relations, in which Gottlieb figures as an example of skillful public relations work. When Kramer interviews Art Stevens, the author of this public relations how-to, he learns that Gottlieb himself, speaking nearly three decades after the events in question, is the source of the story.

Gottlieb is dead, but Kramer is able to track down Charlotte Klein, who worked with him during the period in question. It turns out—Khalidi might have made much of this smoking gun—that the government of Israel was a client of Gottlieb’s firm. But Klein, who managed the account and so was in position to know, says that “there was never a discussion about Uris or regarding a popular book about Israel.” Next Kramer visits the Israeli State Archives “and [finds] the Israeli foreign ministry files related to Gottlieb,” which include “contracts, reports, budgets, invoices, and press reports.” Although the “documents explain the relationship” between the Government of Israel and the firm “in detail,” there is not one word about Leon Uris or the story Khalidi tells.

I review this piece at length because it goes to the heart of Kramer’s concerns. Khalidi, a respected historian, tells a story devoted to demonstrating that Israel is supported by well-funded propaganda. But that the story is a fabrication, one anti-Israel authors are so desperate to believe that they rely on an ancient public relations how-to without checking the story. Exodus may have been great public relations for the State of Israel, but it was also “universally understood to be a work of fiction.” In contrast, Khalidi “claimed to speak in the name of history.” He thereby showed himself, like the people on whom he relied, “as someone eager to repeat and embellish a story simply because of its political utility, without even a cursory check of its historical veracity.” Kramer, in contrast, although he freely admits that he has a dog in the hunt, interviews scholars and principals and, where necessary, visits the archives. Kramer is doing history. Khalidi, though presenting his historian’s credentials, is laundering propaganda.

Israel bashing is not the sole motive for the errors to which Kramer draws our attention. I think there is no question that Ari Shavit is a friend of Israel and his recent hit book, My Promised Land, appeals to a certain kind of Zionist, one who wishes to love Israel, to insist on its right to exist, and, at the same time, to concede that Israel has been grossly unjust to Palestinians. The best known chapter of the book, published by The New Yorker, investigates an incident that took place in Lydda during Israel’s War of Independence. Shavit constructs his case that what took place at Lydda was a massacre, including the brutal, vengeance-driven, execution of wounded civilians, from testimony he collected in the 1990s. Kramer convincingly shows that Shavit has ignored other, readily available, oral testimonies that Kramer was able to “uncover in just a few days of archival research.” In at least one important case—one on which hangs the blood guilt of Israeli veterans–Shavit seems to have preferred hearsay to eyewitness testimony. The testimonies Kramer finds can be read to suggest that what took place at Lydda was a battle, albeit a lopsided one that resulted in civilian deaths, rather than a revenge-fueled massacre, as Shavit tells us it was. In one striking instance Shavit presents the unsourced story of the cold-blooded murder of an Arab detail assigned to bury the bodies. He does not mention—perhaps because he is unaware of it—the existence of an Arab inhabitant of Lydda who claimed to be part of the detail (which burned rather than buried the bodies) or of the man’s wife, who asserts that the detail was taken prisoner, rather than summarily executed, afterwards. While we have no reason, Kramer concedes, to assume that this testimony, offered 55 years after the fact, is true, Shavit offers no testimony at all to support the most serious of charges, one that, as Kramer points out, seems meant to remind us of the Holocaust.

To his credit, Kramer includes a delightfully nasty but also well-argued exchange between him and the historian Benny Morris concerning Lydda. In my view, Kramer gets the better of it. Morris justly takes Kramer to task for a significant omission, of the fact that, as Kramer clarifies in his second rejoinder, the order to expel Arab civilians from Lydda came from “on high” (just how high being a matter of dispute). Although the alleged massacre, rather than the expulsion, is Kramer’s focus, he does mention the expulsion, and if he found time to present it as the result of an improvised agreement between the military governor and local notables, he could have found time to mention that Yitzhak Rabin ordered that “the inhabitants of Lydda must be expelled quickly without attention to age.” Yet whitewashing is not Kramer’s game. As Kramer points out, he had already, before Morris’s criticism appeared, said this: “My motive hasn’t been to protect Israel’s honor against the charge of massacre. There are some well-documented instances from 1948. It’s just that Lydda isn’t one of them. From a narrative point of view, it’s appealing to combine the stories of the largest expulsion and the largest massacre. But that’s a little too tidy, and when the past appears tidy, it deserves another look.” Nothing Morris says undermines Kramer’s case that Shavit, and the commentators who have praised his book as good history, (Simon Schama has said that the book is “without the slightest trace of fiction”) may have been seduced by an appealing (to a certain kind of Zionist) story.

Suffice it to say that most of the pieces in this collection perform the same kind of work as the two I have treated at length, and that a number of the dubious stories that Kramer calls into question (that Israel’s victory in 1967 destabilized the Middle East; that the failure to resolve the Arab-Palestinian conflict is responsible for much of what ails the region) have serious policy consequences.

One treat of one gets from the War on Error is hearing Kramer pay tribute to people he admires, like the journalist and historian, Shabtai Teveth, who brought a “mix of passion, energy, and encyclopedic knowledge [to] the pursuit of every recoverable fragment of evidence needed to establish the truth.” Or Fouad Ajami who was driven to “test his second-hand notions of Israel against the reality” and who “taught himself more about Israel than any Arab intellectual of his generation.” Kramer admires human beings who, though driven by passions—which we cannot get around—subject themselves to the discipline of seeking out, weighing, and reflecting on the evidence. In The War on Error, Kramer demonstrates his kinship with the people he admires. His book deserves to be widely read.

This essay was sponsored by SPME

A review of The War on Error: Israel, Islam, and the Middle East