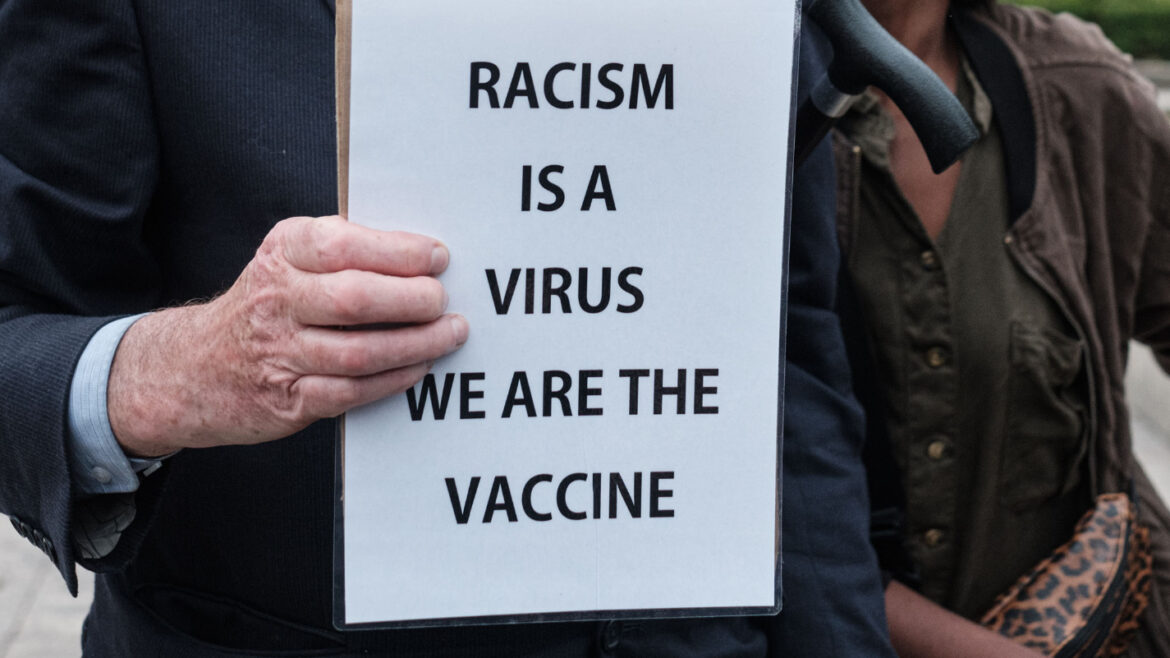 I must apologize at the outset for offering to the reader what is by now a truism known to everybody who has had even short periods of sobriety during the last decade. Whatever imaginings the reader may have had during the twentieth century about being a unique individual and about treating others as individuals, the twenty-first century rejected them and saw them off. Notions such as “individual character,” “merit,” and “colorblind assessment” are now seen as bad jokes that were never that funny in the first place, but really smokescreens for the wrong kind of supremacism and oppression.

There is now a strong consensus in schools, universities, the media, big tech, big business, and government that there are good human races and bad human races, good sexes and bad sexes, good sexualities and bad sexualities, and good ethnicities and ethnicities: White people are bad, evil oppressors of soulful people of color. Males are toxic oppressors of gentle females. Heterosexuals deny and reject LGBTQ++ normality and rights. Christians and Jews are bigoted oppressors of righteous Muslims. America, Canada, Europe, Australia, and New Zealand are systemically racist and sexist and heteronormative societies, LGBTQ++ phobic, and Islamophobic.

All of this evil bigotry, we are told, must be overturned by measures that favor the oppressed and marginalize the evil perpetrators. People of color, females, LGBTQ++, and Muslims are “diverse,” and their “inclusion” must be a priority, while white people, males, heterosexuals, and Christians and Jews are not “diverse” and can without fault be excluded. These measures are not new; “affirmative action” favoring people of color, females and some minority ethnicities, validated by courts, has been an established policy in education, industry, and government for fifty years. “Virtuous” discrimination against white people, males, heterosexuals, Christians and Jews, and in some contexts, Asians, has long been second nature in our institutions. But now reverse racism, sexism, and discrimination has become the most important principle and policy in all spheres, canceling any consideration of competence, not to mention fairness.

Our president-elect, former V.P. Biden, has announced proudly that his cabinet picks and other appointments are the most diverse ever, consisting of more people of color, more females, more Muslims, and more of certain other ethnic minorities. Of course, he has said comparatively little about the expertise, the intelligence, the diligence, or the character of his appointees, because these things no longer matter. Just not appointing white people and males is enough to guarantee approbation from the self-appointed virtuous, for now.

The Centers for Disease Control and Prevention Committee on Diversity and Inclusion recommended that elderly Americans, the people most at risk from the coronavirus (if we “follow the science”), not be given priority to receive the vaccine because they are not sufficiently “diverse,” that is, they are too white. Instead, they recommended that the more diverse “essential workers” be given priority over the elderly. “Essential workers” include clerks in cannabis and liquor stores, workers in casinos and finance (which group together nicely), lawyers, and, (surprise!) political office holders and legislators. According to the Washington Post, “President-elect Joe Biden’s covid-19 advisory board supports the phases set forth by the advisory group, said one of its co-chairs, Marcella Nunez-Smith, an associate professor at the Yale School of Medicine. She praised the panel’s experts for ‘taking political interference out of the process’ and said she was ‘quite excited by their grounding in inequity,’ referring to the importance given to factors such as housing and minority status in decisions about prioritization.” How exactly prioritizing distribution according to race and ethnicity is “taking political interference out of the process,” Ms. Nunez-Smith does not explain. Perhaps she sees racism as non-political, just “virtue” expressing itself.

No institution is as committed to virtuous racism and sexism as our universities, which almost without exception prioritize “diversity, equity, and inclusion” above all other values. But do not imagine that equity and inclusion mean equal treatment of people of all categories. On the contrary, equity and inclusion are defined in practice as giving priority to females, people of color, LGBTQ++, Muslims, and the disabled, and the marginalizing of others. This is seen in every recruitment function: student admissions, hiring, promotion, and grants. In the United States and in Canada, females make up a supermajority of students, with males in a minority, of around forty percent. As well, at the University of British Columbia, “visible minorities” (that’s Canadian for non-whites) make up a percentage of students twice as large as their presence in the general population, and white people make up a percentage of students half as large as their presence in the general population.

Advertisements for professorships and for administrative positions from many universities specify preferred or even required race, gender, or ethnicity, thereby excluding others from even applying. (Some universities try to pretend it is not about race by saying that they are looking for candidates with “lived experience as a member” of the First Nations (Canadian for indigenous populations), or of a black community, or of a Latinx community.)  University administrations formulate plans to increase the number of professors and administrators of particular races, sexes, and other “marginalized minorities.” Many universities require applicants for professorial posts to specify, as part of their applications, how their teaching and research would advance racism and sexism—sorry, I mean “diversity, equity, and inclusion.” Not to be outdone, professional associations and research granting agencies now require statements about how applicants have in the past and will in the future advance diversity. Universities today have hired large numbers of “diversity and inclusion” officers to police thought and speech, ensuring that nothing critical of diversity ideology is spoken or published, and that anyone deviating from the diversity ideology is re-educated or expelled.

Students serve as auxiliaries, performing Red Guard attacks and cancellations against dissenters. No longer are universities places in which questions can be raised, various answers proposed, different views argued, and research advanced to collect evidence relevant to the questions. Those days are over, for we now know all of the important answers, which we label “social justice,” and the job of the university is now to apply those answers. The search for knowledge has been replaced by ideologically driven social engineering. The social sciences, humanities, education, and social work have gone so far down the social justice path as to be almost entirely irredeemable. As a recovering feminist has recently said, “our universities are so infected with Critical Social Justice ideology that they are probably not salvageable at this point.” The only solution that remains is in the hands of the taxpayers and the legislatures that fund universities.

Although universities, professional organizations, and granting agencies appear to be entirely committed to diversity and inclusion, just to make sure, the Government of Canada has mandated “social justice” for all universities. And to ensure that universities follow through, the Canadian Government has threatened to withhold funds if the universities’ applications are not sufficiently racist and sexist, er, diverse and inclusive. In Canada more generally, universities have engaged in a fierce competition, in order to increase their diversity and their eligibility to receive government funding, to recruit and hire as many First Nations individuals as possible, academic credentials being at best a secondary consideration. In the small department from which I have now retired, there was a commitment to hire two First Nations professors, but the competition was too tough and candidates went elsewhere.

Apparently, the height of “diversity and inclusion” is the good new segregation. Social spaces, eating facilities, dormitories, and ceremonies are in contemporary universities segregated according to race, ethnicity, and sexuality. Exactly how does segregation advance diversity and inclusion? Are not the principles underlying segregation homogeneity and exclusion? Segregation is the proactive side of university racism, sexism, and ethnic supremacism. The negative side is the systemic white-phobia and male-phobia. This is seen in the active suppression of whites and men, not to mention the systemic bigotry against Christians and Jews. As females today demographically dominate most academic fields, the few fields with male majorities are suffering frontal attack by universities, research associations, granting agencies, and the government. At every level, there are programs to increase the number of females in the STEM fields in order to reverse the offensive male majority in those fields. McGill University in Montreal has a program which features placards everywhere on campus celebrating females in science. The University of British Columbia currently is striving to raise female enrolment in engineering to the fifty percent level. But in the great majority of fields, where females make up super majorities, there are no programs to raise the number of males to fifty percent.

All of this validation of identity politics has sent some students and professors into frenzied partisan activism on behalf of preferred races and genders and against disapprobated races and sexes. In various universities across the United States, militant black organizations have denounced administrations, professors, and staff for racism and oppressing black students. In a recent instance, “black students and a particularly race-agitated faculty member at the University of Rhode Island (URI) created something they named The Diversity Think Tank, whose audacious role, it seems, is to ‘reject a worldview of white supremacy that has reigned unchallenged for 128 years at the University of Rhode Island and with ONE voice speak this Declaration of Diversity to embrace racial equity and to renounce the evils of racism and renounce the evils of white supremacy deeply embedded in our systemically racist university.’” Denunciations are, as usual, followed by demands, such as to “Require every professor . . . and affiliated persons of the University of Rhode Island to undergo mandatory in-person anti-racism training,” and for all individuals to “be evaluated and continuously re-evaluated by multicultural organizations and administration of color for racist behavior and unconscious racism. Professors with repeated complaints of racist behavior from students should be removed or URI will be sued.” Universities are now all about race, sex, and other identities, even thoughmany potential recipients of these alleged “social justice” benefactions see them as demeaning and disapprove.

How are you enjoying, dear reader, the cancellation of your individuality, capabilities, achievements, and potential, and your reduction to a cipher in racial, sexual, sexuality, and ethnic census categories? What can we call the flipping of one kind of racism and sexism, etc., to its opposite, but corruption of our ideals and institutions?