The long-awaited Forde report concludes that Jew-hate in the party was not overstated or fabricated, as the former leader suggested 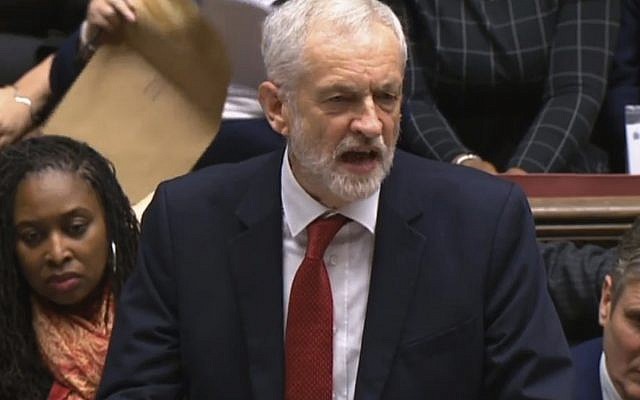 Jeremy Corbyn was fundamentally wrong to suggest that antisemitism in Labour was “overstated for political reasons” with no evidence that it was “fabricated”, a long-awaited inquiry has found.

The Forde report, commissioned by Sir Keir Starmer and led by Martin Ford QC, stated unequivocally: “There is nothing in the Leaked Report (or elsewhere in the evidence we have seen) to support the conclusion that the problem of antisemitism in the party was overstated.”

This directly contradicted the former leader’s assertion that the scale of antisemitism in the Labour Party during his leadership was “dramatically overstated for political reasons” by opponents and the media, a position which cost him the party whip.

The inquiry further found “no evidence that claims of antisemitism were fabricated by complainants or improperly pursued by the complaints team”.

Strikingly, the Forde Report also supported the Equality and Human Rights Commission (EHRC) findings that Mr Corbyn did interfere with the disciplinary process in “a limited number” of antisemitism cases, notably in relation to his own allies, which was “to be deplored”.

But the inquiry also drew widespread condemnation after it criticised Labour members who opposed Mr Corbyn and his supporters, arguing that the controversial hard-left group Jewish Voice for Labour (JVL) should have been allowed to deliver antisemitism training.

Joe Glasman, Head of Political and Government Investigations at Campaign Against Antisemitism (CAA), said: “Taking even-handedness to an absurd extreme, the Forde Report tries to criticise and defend both ‘sides’ in Labour’s antisemitism scandal equally.

“One ‘side’ was filled with antisemites and their enablers. The Report failed to grasp this elemental truth, rendering it useless.

“Just one such example is the Report’s ludicrous suggestion that the antisemitism-denial group and sham Jewish representative organisation, Jewish Voice for Labour, should not have been excluded from delivering antisemitism education to the party.”

In response, a JVL spokesperson said: ”The Forde Report provides a very useful critique of Labour’s antisemitism training. In particular it recognises that Education including respectful dialogue is the key to this.

“It is clear too that Forde and his team have actually read the materials our Jewish academic experts at JVL have provided as well as the work done by the Pears Institute for the Study of Antisemitism. They clearly recognise we have something valuable to offer.”

The report made several points in favour of Mr Corbyn and his supporters. It concluded, for instance, that staff in the leader’s office had given “input into specific [antisemitism] cases” at the request of HQ and that Corbyn’s office had responded “for the most part, reasonably and in good faith”.

“We note that their responses were subsequently used to form the basis of wholly misleading media reports which suggested that LOTO (Leader of the Opposition’s Office) staff had aggressively imposed themselves on the process against HQ’s wishes,” it acknowledged.

Nonetheless, the damning findings appear to make the possibility of Mr Corbyn being eventually readmitted into the parliamentary party even more remote.

Lord Ian Austin, who resigned from the Labour Party in protest against Mr Corbyn’s handling of antisemitism, told the JC: “Not only should Jeremy Corbyn’s suspension not be lifted, but Keir Starmer should kick him and his hard-left supporters out if he wants to show the British people that the Labour Party has truly changed from the days of Corbyn’s terrible leadership. There should be absolutely no way back for the former leader.”

Lord Austin added: “It’s terrible that this inquiry was needed in the first place. The Labour Party is supposed to be a party that fights for equality and justice, and is a party thousands of people like me joined in order to fight racism.

“So it is appalling that the party was poisoned by extremism and racism against Jewish people under Jeremy Corbyn’s terrible leadership, and it will take a long time and a lot of hard work to cleanse the party of this appalling stain.”

In response to the report, Mr Corbyn released an astonishing statement that made no mention of antisemitism. “My election as leader in 2015 was a major shock in British politics,” it said. “It wasn’t about me, but a popular demand for anti-austerity politics following the 2008 financial crisis and 35 years of market fundamentalism.

“Despite overwhelming support from members and affiliates, powerful groups in the party found that change hard to come to terms with. This led to a conflict in Labour that created a toxic environment, which the Forde Report lays bare. In any party there are groups and factions, but the resistance we were faced with went far beyond that.”

The statement went on to criticise “the repulsive racism and sexism shown to Diane Abbott and others,” which “should have no place in a progressive party”.

Published on Tuesday afternoon, the damning, 138-page report concluded that a “vociferous faction in the Party sees any issues regarding antisemitism as exaggerated by the Right to embarrass the Left”.

It also found that Labour Party members routinely used allegations of antisemitism as a “factional weapon” during the Corbyn years.

Evidence of “denialism” towards antisemitism was rife in Labour, the report said, defined by the authors as “the complete denial that antisemitism was an issue in the party whatsoever”. This was was “principally among some of Jeremy Corbyn’s supporters”, it found.

It added that both pro-Corbyn and anti-Corbyn factions of the party failed to recognise “the seriousness of antisemitism, its effect on Jewish communities and on the moral and political standing of the Party”.

The inquiry initiated an extensive call for evidence from the party membership. More than 1,100 submissions were received that provided “compelling testimony detailing their experiences of antisemitism (along with other forms of racism, sexism, homophobia and ‘denialism’) within the Party.”

The Forde Report has suffered a number of delays, having originally been due to be delivered in July 2020.

The chair of the inquiry, Martin Forde QC, commenced the inquiry in the wake of the leak of a document continuing private WhatsApp messages that exposed bitter internal warfare as Labour struggled to fight antisemitism.

The “Labour Leaks” document, written by party staff during the EHRC probe into antisemitism, was placed online in April 2020.

It alleged that the party’s 2017 election efforts were undermined deliberately by people opposed to Mr Corbyn’s leadership.

The Forde report stated, however, that the authors of the leaked document “were not seeking to play down or obscure the scale of antisemitism”.

Overall, it found “little evidence of mutual respect and a great deal of evidence of factionalism, so deep-rooted that the party has found itself dysfunctional”.

It added: “However, we do also accept that the messages’ authors were not given a right of reply before their messages were included in the leaked report; that was a clear breach of natural justice.”

The report went on to criticise “a culture of intellectual smugness which exists at the extremes of the political spectrum the party represents”, concluding that many in Labour had “lost sight of the humanity of those they see as being in an opposing faction”.

Regarding relations between Mr Corbyn’s team and his opponents, the report stated: “The whole situation rapidly deteriorated as several on the Right did seize on the issue as a way to attack Corbyn and several on the Left adopted a position of denialism and conspiracy theories.”

The long-awaited Forde report concludes that Jew-hate in the party was not overstated or fabricated, as the former leader suggested