Resolution crafted in response to anti-Semitic attacks on cemeteries, Jewish centers; critics say it stifles some forms of Israel criticism 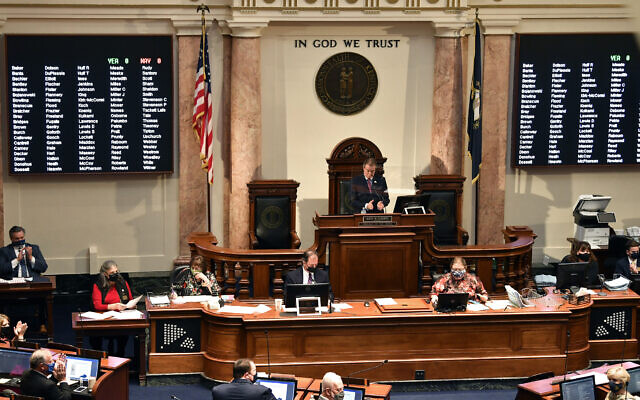 Kentucky Speaker of The House David Osborne addresses the members of the House during the opening day session of the Kentucky State Legislature in Frankfort, Ky., Tuesday, Jan. 5, 2021. (AP Photo/Timothy D. Easley)

For the first time, a US state has officially adopted a definition of anti-Semitism that has ignited debates worldwide over the extent to which criticism of Israel should be considered anti-Semitic.

Lawmakers in Kentucky voted to adopt the definition developed by the International Holocaust Remembrance Association, known as IHRA, on Wednesday as part of a broad resolution aimed at condemning anti-Semitism.

The hearing and vote, which was unanimous, came as a surprise to the state legislature’s only Jewish member, according to the Louisville Courier Journal. But state Senator Karen Berg quickly signed on as a co-sponsor.

“The desecration of Jewish cemeteries and congregations and community centers — it’s increasing,” Berg, a Louisville Democrat, told the newspaper. “And everybody knows it’s increasing. It’s part of the whole hate that we got to put away.”

The resolution does not make clear what force the adoption will hold, if any, in the state. Advocates for the definition, which was first published in 2016, say having a clear and common definition of anti-Semitism is helpful in identifying Jew-hatred.

But its critics say it stifles free speech by identifying some forms of Israel criticism as anti-Semitic.

Resolution crafted in response to anti-Semitic attacks on cemeteries, Jewish centers; critics say it stifles some forms of Israel criticism