“The ongoing decades-old long demonization and dehumanization of the Jewish state has been misunderstood as political criticism when in truth, it has been the new virulent form of anti-Semitism,” said Dan Diker, a fellow and senior project director at the Jerusalem Center for Public Affairs. 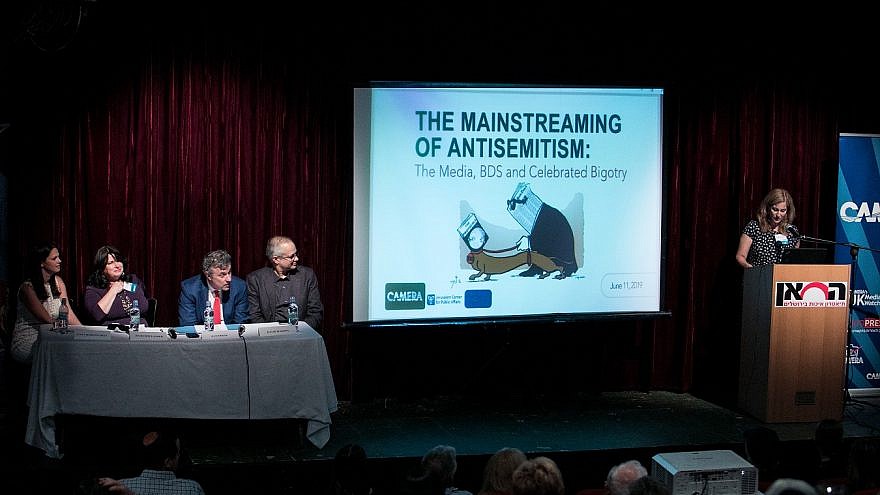 A panel of experts from the Jerusalem Center for Public Affairs and the Committee for Accuracy in Middle East Reporting in America (CAMERA) discuss anti-Semitism in the media, campus and public life. Photo by Kineret Rifkind.

Moderating a panel in Jerusalem this week titled “The Mainstreaming of Anti-Semitism: The Media, BDS and Celebrated Bigotry,” David Hazony, executive director of the Israel Innovation Fund, analyzed the issue right off the bat: “What you are seeing on [North American college] campuses is only a thin slice of the anti-Semitic beast that has emerged in our public life around the world in the last six months, in the last year.”

The event was hosted by the Committee for Accuracy in Middle East Reporting and Analysis (CAMERA), in partnership with the Jerusalem Center for Public Affairs (JCPA) and Hazony’s organization.

He went on to ask: “Is it possible that anti-Semitism and assimilation—the two great crises facing the Diaspora today—are really two sides of the same coin?”

“At a time when the next generation of Jews feels less connection, has less knowledge, has less commitment to our collective than any generation in the past,” he continued, “is it any wonder that this monster that’s been lurking in the deep smells blood, smells weakness and chooses this time to rear its head?”

Whether or not Hazony’s anti-Semitism/assimilation theory is correct, the numbers don’t lie. During his comments, Dan Diker, a fellow and senior project director at the JCPA who is heading their program to counter political warfare and BDS, cited a study indicating a 70 percent increase in anti-Semitic hate crimes in New York City in the first six months of this year compared to 2018, with another study showing attacks on Jews up 57 percent nationally in the United States.

Diker, who displayed the recently published anti-Semitic New York Times’ political cartoon on a screen behind him, which depicted a blind U.S. President Donald Trump wearing a yarmulke being led by Israeli Prime Minister Benjamin Netanyahu as his guide dog, wearing a Star of David on his collar, said a Hudson Institute study that just came out showed that 45 percent of 18-to 65-year-old likely American voters in 2020 could not or would not determine that the cartoon was anti-Semitic. 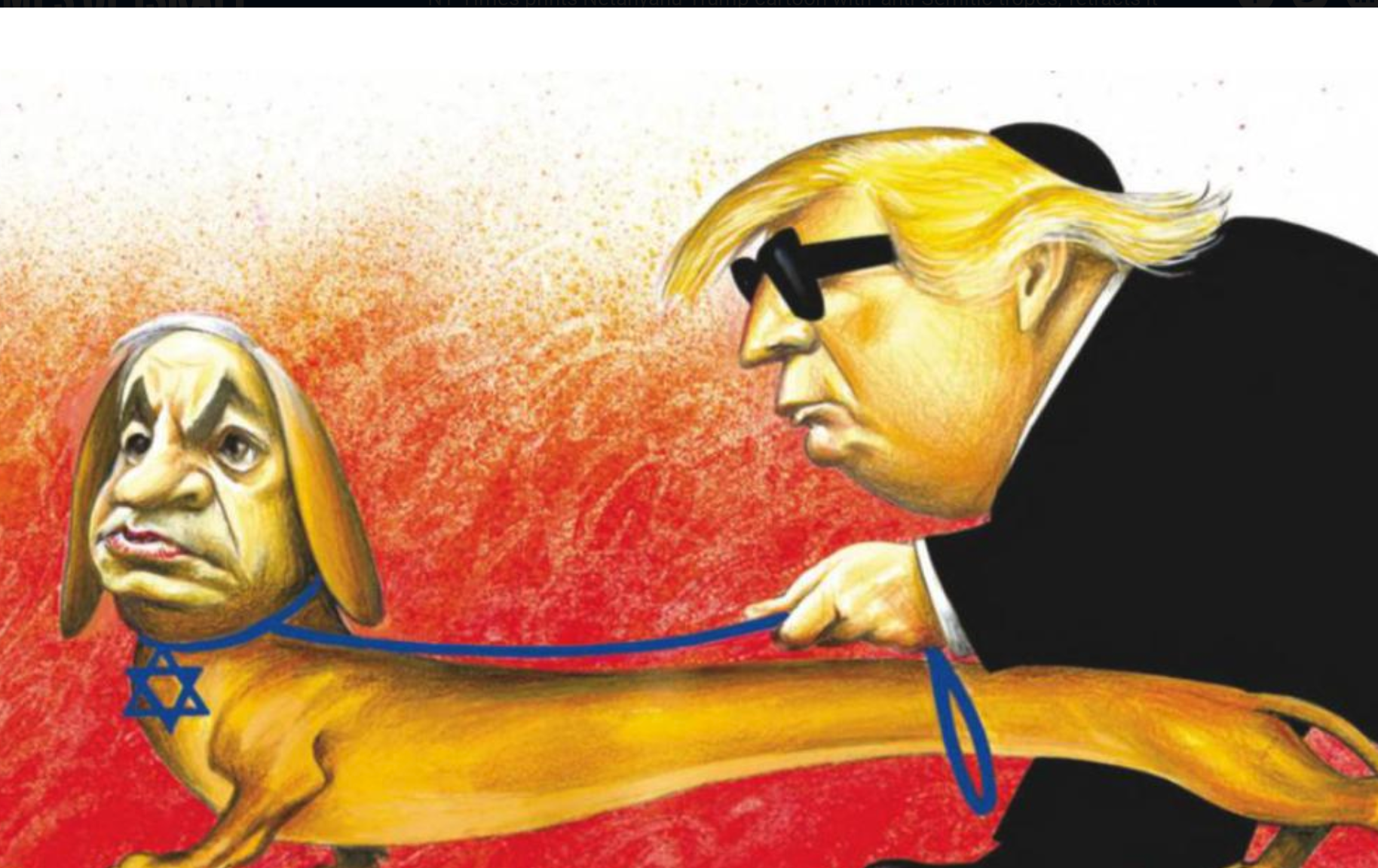 A controversial cartoon published by “The New York Times” international edition on the last day of Passover, April 25, 2019. Credit: Courtesy.

That cartoon caused a social-media uproar after the image was shown to mirror caricatures in Nazi publications of the 1930s and 1940s in Germany.

‘Outside the ballpark of legitimate criticism’

But what is considered legitimate criticism of Israeli policy, and when does that cross over into anti-Semitism?

Diker tells JNS that “legitimate criticism is defined by the criticizer having the facts, and asking questions about facts and fact-based policy, having researched the context of the question.”

However, he explains that if critics engage in demonization, delegitimization or double-standards—the “3 Ds” developed by Natan Sharansky, former deputy prime minister of Israel and longtime prisoner of Zion in the former Soviet Union, and which are the founding principles of the IHRA (International Holocaust Remembrance Alliance) international definition of anti-Semitism—then “they are outside the norm and the ballpark of legitimate criticism.”

He added that “without any doubt, BDS is a demonstrably anti-Semitic in substance, in intent and in implication.” He noted that Israelis especially have an obligation to unmask the anti-Semitic roots of the BDS movement.

While he believes that defining BDS as anti-Semitism is the consensus in Israel, it was Germany’s parliament last month that became the first country in the European Union to pass a resolution designating BDS against Israel as being anti-Semitic.

Diker noted that the only two groups to condemn the German parliament’s censure of BDS were the terror group Hamas, and 240 Israeli and Jewish academics in Israel and abroad, the latter of which have mistaken the campaign for legitimate criticism of the Jewish state.

He did, however, conclude with some positive news, saying that “the major leaders in Europe and the United States have clearly stated that BDS is anti-Semitism.”

‘Willing to speak up about it’

Ricki Hollander, senior media analyst at CAMERA, discussed anti-Semitism in the media, first describing the Times’ reaction to the political cartoon. The newspaper originally released a statement calling it “an error in judgement,” and only much later issued a formal apology, essentially blaming an “unsupervised editor” for allowing its publication.

As a result, however, she noted that The New York Times this week banned political cartoons.

Still, Hollander posed, “How is any editor at all of the ‘paper of record’ incapable of recognizing classic anti-Semitic imagery?”

She went on to cite numerous articles in the paper that portray Israel as the aggressor in the ongoing conflict with the Palestinians, who are over and over again shown to be the victims of brutality by the Israel Defense Forces, while at the same time whitewashing violence and terror by groups such as Hamas and Hezbollah.

Hollander said that when CAMERA tried to set the record straight after several articles implied that Israel was targeting civilians at the Gaza border during this past year of “return marches”—articles that referred to violent rioters as “peaceful protesters”—the corrections’ editor defended their choice of terms and said a correction was not warranted, saying they were demonstraters across the board, even if some were violent.

Hollander explained that “when journalists use double standards or distort, conceal and revise the facts in order to maintain their rigid narrative of Israeli guilt, they’re not relaying legitimate criticism of Israel. And when a newspaper standards editor twists herself into a pretzel to defend their biased reporting, we see how deeply entrenched is this anti-Semitism that masquerades as criticism of Israel.”

Aviva Rosenschein, International Campus Director for CAMERA, detailed growing anti-Semitism on college campuses, saying that Students for Justice in Palestine (SJP) chapters across the United States have shared anti-Semitic literature, trying to hide it under the guise of anti-Zionism. But she said their mistakes have, at times, “revealed their true colors.”

While the Times’ cartoon used Nazi-like imagery, Rosenschein gave examples of SJP using actual Nazi imagery in materials meant to be critical of Israel and its political policies.

According to Rosenschein, collaboration between SJP and Jewish Voice for Peace (JVP), another radical anti-Israel organization, is also fueling anti-Semitism at universities.

“Neither SJP nor JVP represent mainstream Jews,” she said, “yet both groups somehow think that they are in a position to decide what constitutes discrimination and bigotry against Jews.”

She added that the anti-Semitic agenda of groups like SJP and JVP are often glossed over and misunderstood by university administrations.

Rosenschein told JNS that it is also surprising that many instances of anti-Semitic activity take place at schools with high Jewish student populations.

On the positive side, this means “we have the numbers to do something about it,” she said.

At those campuses and others, “there is no reason why we should be sitting back and taking it, and feeling intimidated. So though it is difficult for the Jewish students, as long as they have the support and the backing, they will stand up, and that’s the main thing we are trying to get across—that people need to feel strongly about their views and willing to speak up about it.”

She told the audience: “The more chancellors, administrators, university donors, faculty and students understand the real goals of these extremist organizations, the more allies we will have to stand up against their hate. We cannot expect the average American to know about these difficult issues; we must be willing to educate others.”

“The ongoing decades-old long demonization and dehumanization of the Jewish state has been misunderstood as political criticism when in truth, it has been the new virulent form of anti-Semitism,” said Dan Diker, a fellow and senior project director at the Jerusalem Center for Public Affairs.
Skip to toolbar