New research finds 9% of Britons think Israeli products should be boycotted; those who back boycotts and believe Israel an apartheid state are likely to endorse anti-Jewish tropes

LONDON — Hostility to Israel is closely related to anti-Jewish hatred, a new study of public attitudes in Britain reveals Thursday.

The analysis from the London-based Institute for Jewish Policy Research shows that there is a “clear statistical connection” between backing boycotts of Israel and believing that it is an apartheid state, and the endorsement of traditional anti-Jewish tropes.

“This research helps to identify the close relationship between anti-Semitism and extreme types of anti-Israel activism and rhetoric,” said Dave Rich, head of policy at the Community Security Trust, a charity which combats anti-Semitism in the United Kingdom, which supported the study.

“It is perfectly possible to campaign for Palestinian rights and oppose Israeli policies without being anti-Semitic, but too often, the people involved in these campaigns show themselves to be unable to make this distinction,” he suggested.

The research also indicates strong opposition in the UK to the BDS movement, with the proportion of people backing a boycott of Israeli goods and products outnumbered by roughly five to one. 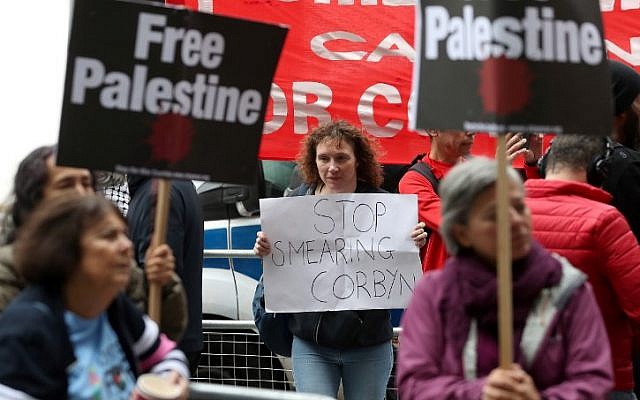 Demonstrators hold placards as they protest outside the headquarters of Britain’s opposition Labour party in central London on September 4, 2018 (AFP PHOTO / Daniel LEAL-OLIVAS)

There is greater backing for the notion – commonly advanced by pro-Palestinian campaigners in the UK – that Israel is an apartheid state.

Anti-Israel sentiment was found more common among supporters of left-wing parties, those who self-identified as Muslims, and Asian Britons. Younger people were also more likely to support calls for a boycott than those aged over 50.

The research is based on a new analysis of a nationally representative sample of 4,005 British adults carried out by the Ipsos MORI research company between October 2016 and February 2017.

Entitled “The Apartheid Contention and Calls for a Boycott: Examining Hostility Towards Israel in Great Britain,” it seeks to examine the contentious question of when legitimate criticism of Israel becomes outright anti-Semitism.

The study established a scale of anti-Jewish sentiment by asking respondents whether they agreed or disagreed with a series of anti-Jewish tropes, none of which related to Israel but all of which are generally considered by Jews to be anti-Semitic. 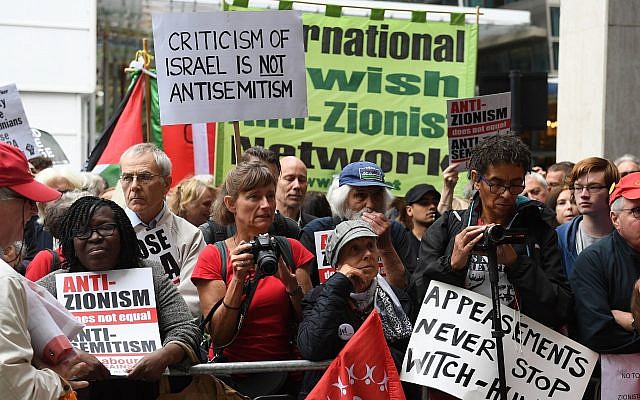 Activists outside a meeting of the Labour National Executive Committee in London, Tuesday, September 4, 2018. (Stefan Rousseau/PA via AP)

These included: “Jews think they are better than other people”; “Jews get rich at the expense of others”; “Jews exploit Holocaust victimhood for their own purposes”; and “Jews have too much power in Britain today.” The more negative items a person agreed with, the more anti-Jewish they were deemed to be.

The research then sought to examine the relationship between anti-Jewish sentiment and a belief that Israel should be boycotted and is an apartheid state – two of the central, interrelated claims of the country’s critics in the UK.

Such attacks on Israel are viewed highly negatively by British Jews. A 2012 survey found that two-thirds of the community believes that a non-Jewish person advocating a boycott of Israel to be either “probably” or “definitely” anti-Semitic.

“A relationship exists between British people’s agreement with each of the two key contentions and their predisposition towards anti-Jewish sentiment – as one scale increases, so does the other,” write the authors, Dr. Jonathan Boyd, executive director of the Institute for Jewish Policy Research, and Dr. David Graham, its senior research fellow. 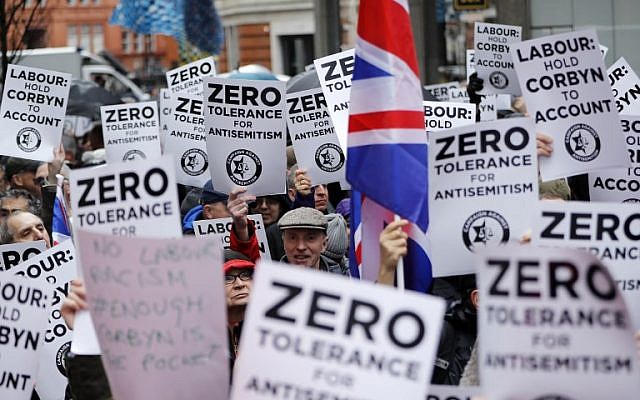 Illustrative: People hold up placards and Union flags as they gather for a demonstration organized by the Campaign Against Anti-Semitism outside the head office of the British opposition Labour Party in central London on April 8, 2018. (AFP/Tolga Akmen)

The correlation between anti-Jewish sentiment and support for BDS was stronger than the belief that Israel is an apartheid state and bigotry against Jews, although the latter correlation is “clearly evident”.

A series of other negative statements about Israel showed an even stronger link with anti-Jewish sentiment. These included a belief that “Israel exploits Holocaust victimhood for its own purposes”; “Israel is the cause of all the troubles in the Middle East”; “The interests of Israelis are at odds with the interests of the rest of the world”; and “Israel has too much control over global affairs.”

The authors caution that supporting a boycott of Israel and labelling it an apartheid state should not be regarded as anti-Jewish “under all circumstances.” Sixteen percent of those who agree with the apartheid statement, for instance, hold no anti-Jewish feelings.

Nonetheless, it is, they write, “scientifically reasonable to conclude that when such claims are made about Israel by non-Jews, there is a relatively high likelihood that they are being made by someone who is also predisposed towards anti-Jewish feeling, thereby indicating anti-Semitic feeling, motive or intent.”

“People who hold traditional anti-Jewish views – such as those relating to money, divided loyalties or nefarious uses of power – are more likely than those who do not hold such views to also endorse these two ideas about Israel. The correlation is notably smoother and stronger with the boycott contention than the apartheid one, but it can be clearly discerned in both,” argues Boyd. 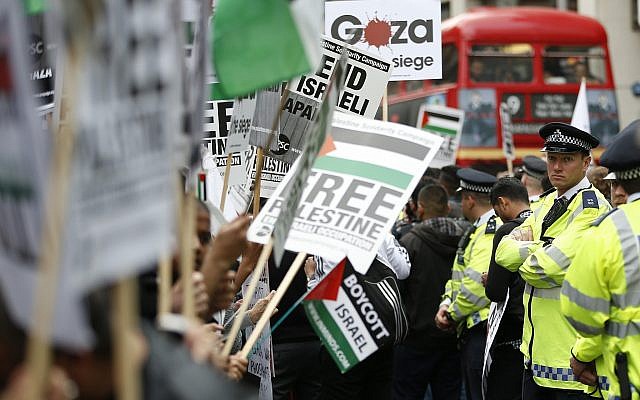 Illustrative: A policeman looks down a line of demonstrators near the Israeli embassy protesting against the action taken against Gaza, in London, Friday, July 11, 2014. (AP/Alastair Grant)

Boyd cautions that not everyone endorsing the red-flagged ideas is necessarily an anti-Semite.

“Indeed the data also indicate that some people who hold these views about Israel exhibit no particular hostility towards Jews at all. But it does indicate that Jewish people, the majority of whom are broadly supportive of Israel, are right to be cautious here,” says Boyd. “Recently-published data from the European Union Agency for Fundamental Rights demonstrate that most Jews experience these claims as anti-Semitic, and this analysis indicates that they are often right to make that call.”

Nine percent of Britons believe Israeli goods and products should be boycotted while 46% disagree. The remaining 45% is split between those who don’t know or those who said they neither agreed nor disagreed.

The question of whether the Jewish state resembles apartheid-era South Africa was equally polarizing: Twenty-one percent of those questioned either “strongly” or “tend” to agree, although the proportion who “strongly” or “tend” to disagree was similar at 19%. Thirty-seven percent said they did not know and 22% said they neither agreed nor disagreed.

The study finds that attitudes towards Israel are “strongly associated” with Britons’ political orientation. Only supporters of the governing Conservative party are more likely to disagree than agree with the notion that Israel is an apartheid state. They also strongly oppose boycotting the Jewish state, with 60% against and only six percent in favor.

By contrast, 27% of Labour supporters, 30% of those who back the centrist Liberal Democrat party and 31% of Greens, supported the apartheid statement, as did nearly 40% of those who vote for the Scottish and Welsh nationalist parties.

However, Labour leader Jeremy Corbyn, an arch-critic of Israel, does not appear to have the backing of his party’s supporters if, as many suspect, he intends to move it towards endorsing BDS. Only 16% of Labour voters support boycotting Israel, as against 40% who oppose it.

New research finds 9% of Britons think Israeli products should be boycotted; those who back boycotts and believe Israel an apartheid state are likely to endorse anti-Jewish tropes
Skip to toolbar