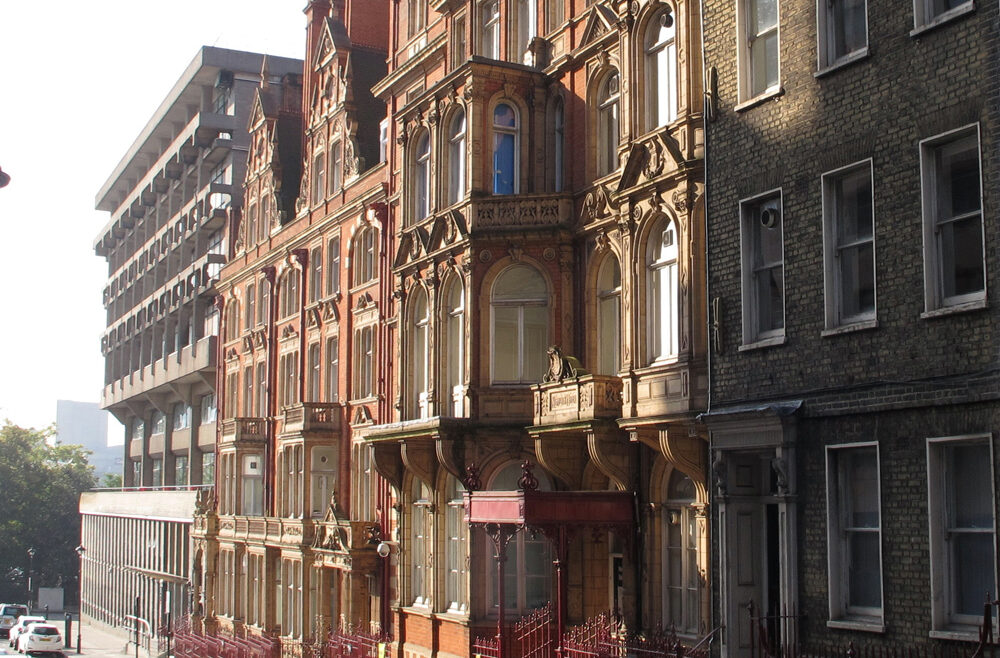 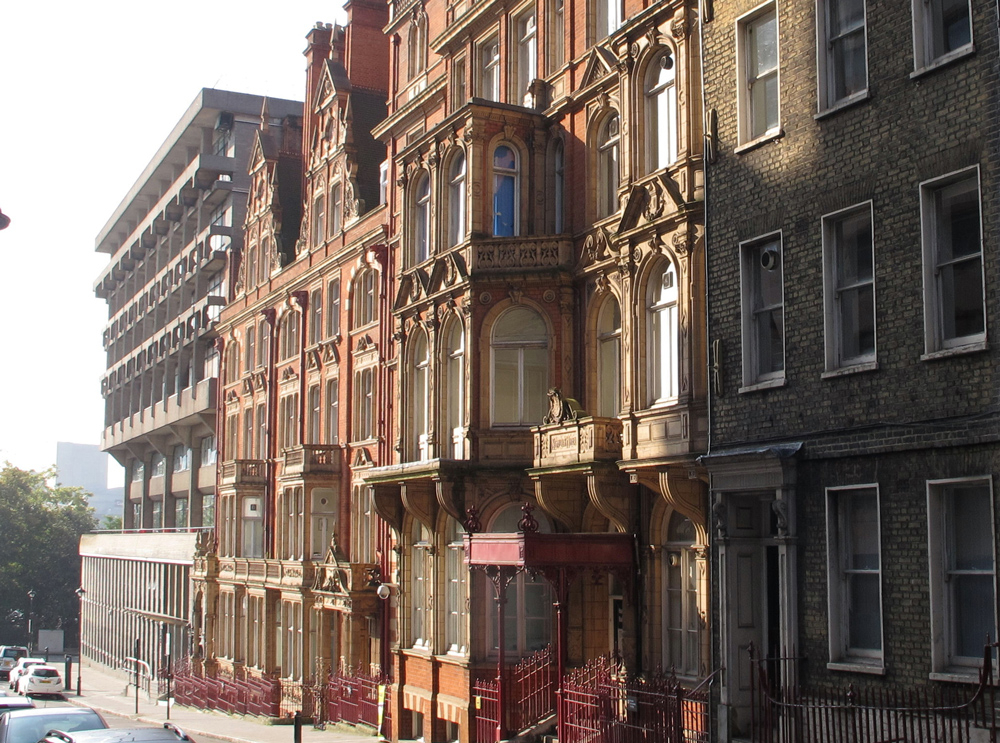 Some British universities are now virtually Judenfrei: free of Jews. This is a chilling indictment not just of British academia but of a liberal democratic society that has tolerated, often through ignorance or complacency, a wave of discrimination against Jews that has swept through the universities over recent decades. Pictured: The Norfolk Building at King’s College London, site of a violent protest against a visiting Israeli speaker in 2016. (Image source: geograph.org.uk/© David Hawgood/cc-sa-2.0)

“The goal is achieved! No more Jews at German universities,” the leading Nazi student newspaper, Die Bewegung, triumphantly proclaimed in 1938.

Of course, nothing like it could ever happen again. Except something like it is happening again — now, and in Britain. According to a report published this week by David Collier, a British researcher, some UK universities are now virtually Judenfrei: free of Jews.

This is a chilling indictment not just of British academia but of a liberal democratic society that has tolerated, often through ignorance or complacency, a wave of discrimination against Jews that has swept through the universities over recent decades. From these halls of learning antisemitism has spread out, driving and empowering what is now a solid movement that threatens Jews in various parts of society and has led to many of them leaving. This is not just in Britain. Collier characterises academia as “the epicentre of global antisemitism”.

This Jew-hate is cloaked in anti-Zionism, a doctrine that claims the Jewish state, alone among the nations, has no right to exist. It seeks to whip up anti-Israel hatred by focusing on three core lies: accusations of apartheid, ethnic cleansing and settler-colonialism.

As Jewish students and professors were hounded out and eventually banned from universities and high schools by German state edict, today in Britain anti-Zionist academics and the students they influence have created an environment that alienates many Jews, by using the pretext of their support for the Jewish state. Of course, not every Jewish student supports Israel and very few are uncritical, as with their own country. Nevertheless, Collier says:

“Jewish people today on campus can be tolerated, protected or abused. At no point are they treated as equals. The best they can hope for is protection and tolerance in a hostile environment. On the campus the prevailing wisdom is that their beliefs in Jewish identity are fundamentally wrong.”

Specifically, Jews are grotesquely branded as members of a race that has no place in the land of Israel, but is a “white” colonialist occupier and oppressor of the indigenous peoples.

Collier asks: “Why would an openly Jewish student want to go to a university where they will be vilified by other students and victimised by lecturers?” The reality in Britain today is that many Jewish students choose their university not by the course content or the quality of teaching, but by the extent of antisemitism they will find there. Baroness Ruth Deech, formerly Britain’s Independent Adjudicator for Higher Education, and an accomplished academic and former principal of an Oxford college, previously commented that “amongst Jewish students there is gradually a feeling that there are certain universities that you should avoid.”

You can meet many Jewish students in Britain and in several other Western countries who attest to this, who will tell you of some universities that are relatively safe for them and others that need to be sidestepped.

I speak frequently at universities on a range of subjects. Only when speaking at the invitation of Jewish or pro-Israel groups have I experienced any hostility as opposed to open debate. In virtually every case, some form of physical protest as well as social media abuse is guaranteed — not to disagree but to silence. This has taken place in the UK, US, South Africa and Australia, where one talk was so severely disrupted that it led to an in-depth investigation by the university authorities with rare disciplinary action taken against the perpetrators that included academic staff.

“If they [Jewish students] are abused, it is far less serious than an offence against someone from the Muslim, BAME or LGBTQ communities. If an academic is responsible for the abuse (see Bristol, Leeds, Warwick) it is the academic who will be protected and the complaining Jewish student who will be victimised – even if the student can prove abuse.”

In a classic pattern of radicalization, there exist in some universities networks of academics who widely contaminate their students with their bias and hatred. Most effectively in terms of perpetuating the spread of antisemitism, some will indoctrinate their students through supervision of PhD studies that can lead to hard-core activism and further lateral and vertical transmission, often from university to university and from country to country.

Their influence is not confined to the universities. Some write libel-filled books, publish twisted columns in national newspapers and are called on to spread their bias in the broadcast media. NGOs, government organizations and international corporations consult and partner with these individuals. They often play leading roles in movements such as the Boycott, Divestment and Sanctions (BDS) campaign and activist groups like the so-called Palestine Solidarity Campaign, inciting anti-Jewish hatred far and wide, sometimes damaging property and intimidating Jews on the streets.

The staunchest defenders of Jeremy Corbyn’s Labour Party came from the academic world. University professors were involved in dozens of events accusing those who opposed Corbyn of smearing him and his henchmen with politically-motivated lies. Unfortunately for them, Labour became the first ever mainstream political party to be investigated by the UK’s Equality and Human Rights Commission. The EHRC found Labour guilty of the very thing these armies of academics were denying — illegal discrimination and harassment against Jews.

Britain cannot be compared to Germany in the 1930s, but similarities exist in some of the objectives and methods of the Nazi bully-boys at German universities in that era. Before Jews were finally excluded, members of the National Socialist Students’ League often disrupted lectures, provoked altercations and intimidated Jewish students. All of this can be seen in British university campuses today.

Responding to a violent protest by students at King’s College London protesting a visiting Israeli speaker, Lord Eric Pickles, UK Special Envoy for Post-Holocaust issues, said in Parliament: “If we need to know who the new fascists are, we need only look at those who perpetrated that attack.” As Robert Festenstein of the UK’s Jewish Human Rights Watch, who have been working for years to combat antisemitism in British universities, told this author: “Jews are being educationally ethnically cleansed from certain universities in the UK”.

The objective of today’s academic bullies is not so much to drive the Jews out but to shut them up and shut them down — to suppress any dissent from their own radical anti-Zionist agenda aimed at delegitimising the Jewish state. They often succeed, forcing Jews to go elsewhere, to keep quiet about facts regarding Israel and even to cause them to hide their Jewish identity. Quite understandably, many young Jews just want to get on with their studies and their lives, not to engage in potentially damaging political confrontations and to risk vilification or worse, which could also have adverse effect on their examination results and employment prospects.

Why should any Jew, as any member of any race or religion, be victimised because of who they are? Why should any proud Jew that wants to express his or her support for the Jewish state be afraid to do so? Israel is one of Britain’s most important allies, supplying us with life-saving intelligence and technology, and is an increasingly strong trade partner. Above all, contrary to the twisted precepts of the Jew haters, Israel is not guilty of the false claims they make to undermine it. At any rate, in a civilised society it must be possible to openly put across the opposing argument without fear.

In 2016, the British government adopted the International Holocaust Remembrance Alliance’s (IHRA) working definition of antisemitism, which provides a tool to enable public bodies to act against such discrimination as is rife in our universities. The government has been working to persuade universities to adopt the IHRA definition, including by warning that funding streams may be removed. Often bitterly contested by academic staff desperate to remain unchallenged in their bully pulpits, as of last autumn only 29 of 133 higher education institutions had complied, although a few others have apparently done so since. More pressure needs to be piled onto the rejectionists, as well as rigorous monitoring, to ensure adherence on the campuses, if need be enshrining the definition in law.

It is also necessary to shine a light on the plight of Jewish students — hardly any British people will have the slightest inkling of what has been going on in our so-called seats of learning. This is where David Collier’s work is vital. His report is the starting point of a project to map the antisemitic networks in every one of Britain’s universities, to understand where and how the hostility exists and to put a stop to it.

Colonel Richard Kemp is a former British Army Commander. He was also head of the international terrorism team in the U.K. Cabinet Office and is now a writer and speaker on international and military affairs.