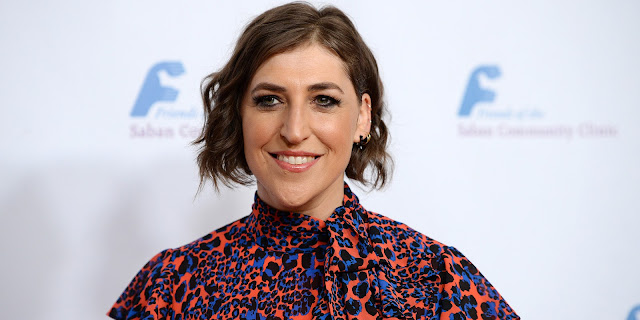 This week, the popular TV game show Jeopardy announce that Mayim Bialik will become one of the permanent hosts for the show, hosting prime time specials. Since she is a proud and observant Jew, I’ve lightly followed her career and I am very happy for her.

The Daily Beast just hired a new writer named Tirhakah Love and he is very, very angry at this choice. As we will see, it is either because he is functionally illiterate or an antisemite.
The headline says, “‘Jeopardy!’ Host Mayim Bialik’s Ugly History of Shaming Weinstein’s Victims and Being an Anti-Vaxxer.”
Say what?
After saying that Jeopardy! should have chosen a black man like him instead of a….woman(!) he writes:

From promoting anti-vaccine literature in her own writing, where in one breath she wrote that she doesn’t want to “dismiss” the families who’ve endured horrible tragedies due to being unvaccinated, but in the next defended her anti-vax stance by sharing that a “friend’s brother had an adverse reaction to a vaccination and he is never going to develop mentally past the age of 6 because of it,” seems really tacky and insensitive and wrong (even if true). She conveniently pivoted to admitting that she and her sons are vaccinated more recently, just in time for her Jeopardy! audition.

What did Bialik actually write in the 2012 article for Kveller?
She said that while she herself feels that vaccines are overused for children nowadays, and she has an anecdote of a friend who had a horrible experience, she would never tell parents not to vaccinate their children.  And in 2020, she said, “I have never, not once, said that vaccines are not valuable, not useful or not necessary — because they are.” She is not an anti-vaxxer; she is a parent with an opinion but one who does not try to push her opinion on anyone else or disparage other people for their choices.
Unlike, say, Tirkhanah Love.
What is his next fictional complaint about her?

Then there was her victim-blaming New York Times op-ed about Harvey Weinstein, concluding that she was never a “perfect ten” and therefore wouldn’t be subject to his kind of predation. While self-identifying as a feminist, in a piece written just days after the Times broke the news of Weinstein’s violent and predatory behavior, she wrote, “I still make choices every day as a 41-year-old actress that I think of as self-protecting and wise. I have decided that my sexual self is best reserved for private situations with those I am most intimate with. I dress modestly. I don’t act flirtatiously with men as a policy.”

If you read her actual op-ed, Bialik was not victim blaming at all. In fact, she explicitly said the opposite: “Women should be able to wear whatever they want. They should be able to flirt however they want with whomever they want….Nothing — absolutely nothing — excuses men for assaulting or abusing women. “
If you actually read the article rather than trying to play “gotcha,” you see that Bialik’s point is that Hollywood is obsessed with women’s looks and minimizes stories where women who are not perfect “10”s can make an impact. She pointed out that the same men who make those decisions on which women get employed are the ones like Harvey Weinstein who prey upon those same women. And she pointed out that things are getting better for women – which, since 2017, they have.
So why would this nobody named Tirkhanah Love have such strong opinions about Mayim Bialik to make it look like she holds opinions that are the exact opposite of what she really believes?
The answer comes from his third example:
Bialik loudly proclaimed her donation toward bulletproof vests for the genocidal Israeli Defense Forces back in 2014 just out of “a need to do something.” After facing backlash, she quieted for a time until May of this year, where she self-identified as a “liberal Zionist” who, like many other celebrities, spouted bothsidesism: “Israel deserves to live as an autonomous free and safe nation,” she told Fox News. “The Palestinian people deserve the same. What is happening now by extremists on both sides is tragic. It’s horrendous. It’s unacceptable. And I have to hold out hope that peace and justice will prevail.”
There you have it – Bialik once expressed support for what Love says is a “genocidal” army.
Anyone who thinks that the IDF is genocidal is ignorant about the IDF, ignorant about genocide and insulting to actual victims of genocide who would have love to have traded places with Palestinians any day of the week.
Here we have it: Tirkhanah Love is a modern antisemite, hiding his hate behind a pretense of caring about Palestinians but attacking someone who is possibly the most public observant Jew in Hollywood today,. Bialik supports the Jewish state’s existence, and to haters like Love, that is enough to attack her and to make up lies about her.
The fact that most fans of Jeopardy! are quite happy with Bialik as a host – she evidently did a fantastic job when she guest hosted – seems to have really gotten under this antisemite’s skin.
The real questions are: why did the Daily Beast hire such an hateful ignoramus? And why did they allow this stupidity to be published without any fact checking?