Militants tore up offices, broke computers and began an occupation of the roof over claims it supplied hardware to Israel 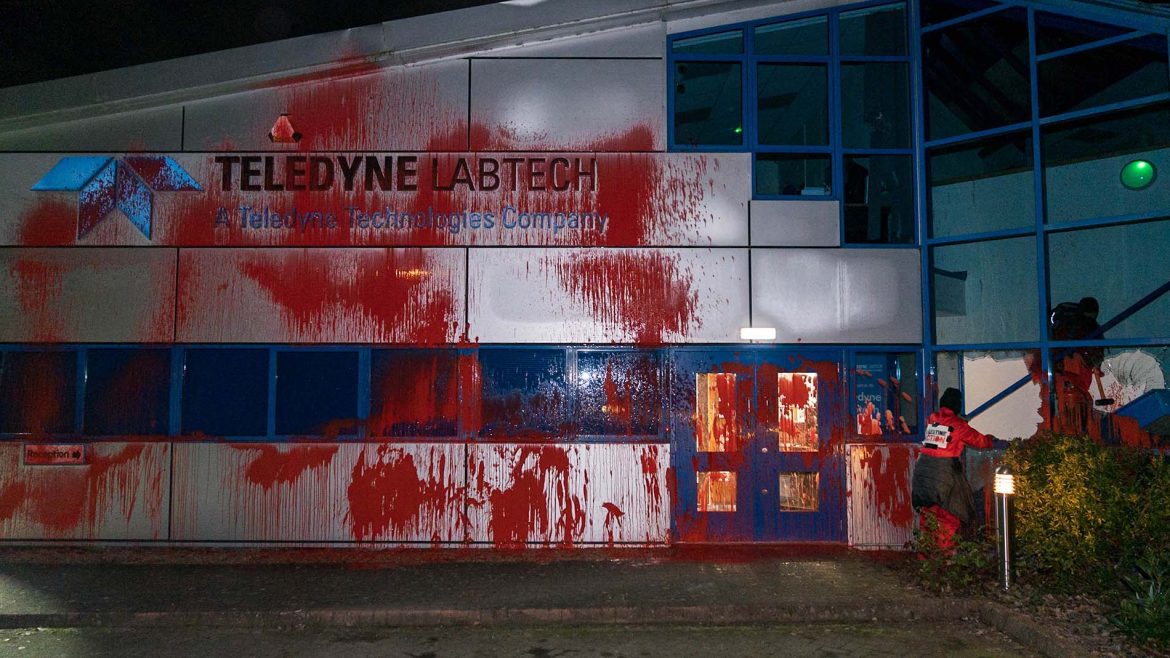 Sledgehammer-wielding protesters smashed their way into a weapons plant in Wales and and rampaged through the building because of its alleged links to Israel.

They then claimed to “thoroughly dismantle the factory of the American-owned firm, forcing closure of a site used to supply military hardware to Israel”.

Demonstrators tore up offices, broke computers, covered the building in red paint and began an occupation of the roof in an attempt to force the factory to suspend its operations.

Four people, including a 69-year-old woman, were arrested.

A group spokesman said: “Britain is now a hostile environment for all companies involved in the brutalisation and murder of Palestinians.”

It claimed Teledyne and its subsidiary E2V Technologies “hold weapons export licences for both Israel and India, where their surveillance and targeting systems are used” against Palestinian civilians.

The group said: “They supply surveillance equipment for Israel’s apartheid wall, and targeting systems for their fleet of combat drones.

“Tackling the imperialist hydra means cutting off all its heads, so we will shut down each and every company complicit in the ongoing colonisation of Palestine.”

A Dyfed-Powys Police spokesman said: “We were called to reports of a burglary at a property in Broadaxe Business Park, Presteigne, at around 6.35am.

“Officers attended and promptly arrested two women, aged 65 and 41, on suspicion of burglary, when it was established they were part of a protest group. Two of the group had made their way to the roof of the property.

“Following communication with officers, they came down at around 10.45am and the 34-year-old man and 39-year-old woman, were arrested on suspicion of burglary.

“All remain in police custody. Enquiries are ongoing.”

It came after the group disrupted the techUK Defence Winter Dinner on Thursday night.

Palestine Action describes itself as “a network of groups and individuals established to take direct action against properties owned by Israel’s biggest arms firm Elbit Systems. The mission is to shut Elbit down and end all British complicity in the illegal colonisation of Palestine.”

Elbit Systems and Teledyne Technologies were contacted for comment.

Militants tore up offices, broke computers and began an occupation of the roof over claims it supplied hardware to Israel